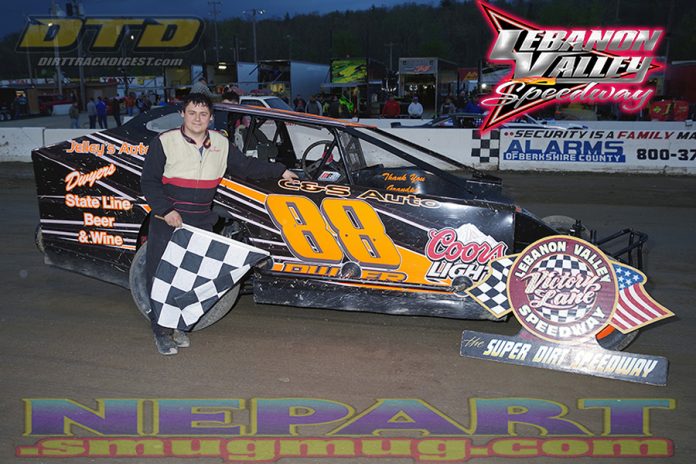 WEST LEBANON, NY – Lebanon Valley Speedway was just about the only track to be able to have a night of racing on Saturday. A number of other tracks were forced to cancel due to rain, but steady showers held off for the most part until after the racing finished up.

Problem is, the lights went out during the evening. One bank of infield lights never came back on afterwards and track management made the decision that it was unsafe to continue after the Pro Stock feature. As a result, there will be double features for the Modified class on May 13. The 4-Cylinders will have double features on May 27. The 31st Annual Boomer’s Performance Purestock Clash will be rescheduled for a later date.

With the light issue, the Small Block Modifieds became the headlining class on Saturday night. Olden Dwyer started on pole for the second week in a row. Last week, a hub failure ended his race before it got going. On Saturday night, he was able to get off to a good start.

Meanwhile, the top contenders were buried deep in the field. Kenny Tremont Jr. failed to finish in the top five in his heat race, forcing him to start 16th. Despite that starting spot, he wasn’t worried in the least, skipping the hot lap session.


For Ricky Davis, Saturday’s feature was a tough one. On lap 4, the young racer stalled exiting turn 4 to bring out a yellow. After getting serviced in the pits, the car stalled again while waiting to be let through at pit out. Ricky was able to continue, but finished back in 14th.

Brett Haas, who finished fourth on opening night, ran into trouble that wasn’t of his own making when Timothy Davis and Jason Herrington collided in turn 3. Haas cut a left front tire and dropped to the rear as a result. Later contact with the wall in turn 1 resulted in an 11th-place finish.

As the race continued on, Tremont, Drellos and Heffner came to play. By halfway, Tremont had already moved up to fourth behind Dwyer, Frank Harper and Kim LaVoy. From there, Tremont methodically made progress. On lap 17, he took second from Harper and began to close down on Dwyer.

Tremont was faster than Dwyer and reeled him in during the final laps. However, the multi-time champion ran out of time as Dwyer held on to take the win.

Afterwards, Dwyer was very pleased with his night.

“The car was on rails,” Dwyer said. “It was a little tight, but when you’re out front, tight can be really fast. I can’t thank my guys enough and all our sponsors.”

Tremont was less than a half-second back at the finish, followed by Harper. Drellos was able to drive up to fourth from 17th, while Heffner was fifth.

In Pro Stock, Tom Dean started from the pole and led early on. On the second lap, Todd Hoffman was able to get past and take the lead. Shortly afterwards, Jason Meltz spun exiting turn 2 to bring out a quick yellow.

Just after the restart, Dean spun in turn 4 and was hit by Nick Hilt. Victor Hopkins and Brian Keough were involved while Matt Cross spun to avoid. That crash brought out the caution. During the yellow, the lights went out, forcing the red flag to come out. After a roughly 20-minute delay, the vast majority of the lights came back on and the field went back on-track.

During that red flag, Rob Yetman’s team saw that he had a flat tire and changed it. As a result, Yetman had to fall to the rear of the field.

On the restart, Rick Dempsey took over the lead as Hoffman’s No. 08 slowed on track. Canaan, CT’s Jon Routhier drove up to second in his open-motor No. 315 and began to pressure the veteran racer.

Naturally, Dempsey wasn’t going to give up the lead without a fight. However, the lack of a rear spoiler and charging into turn 3 a little hot came back to haunt him. On lap 10, Dempsey drove hard into turn 3 and lost control of his No. 35 Chevrolet. Dempsey spun out to bring out the yellow and Routhier took the lead.

The spin moved Jay Corbin up to second. Driving a repaired chassis after crashing on Apr. 29, Corbin pressured Routhier over the final ten laps, but he was unable to keep the Connecticut native from picking up his first win of the year.

Corbin was second, followed by Paul LaRochelle. Yetman was able to charge back from the rear to finish fourth, while Chuck Towslee was fifth.