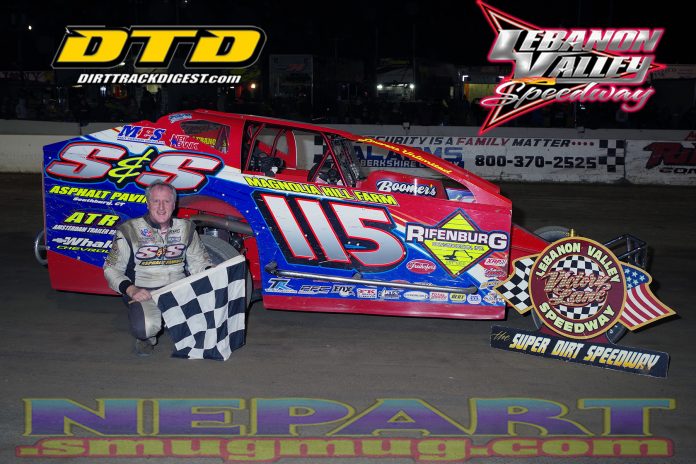 WEST LEBANON, NY – Saturday night saw the Modifieds run double features in order to make up the race postponed due to lighting issues on May 6. Trouble here affected the rest of the night.

Denny Soltis started on pole, but quickly lost the advantage to Kyle Hoffman. Meanwhile, Brett Hearn started in fourth and wasted no time pressuring Hoffman’s Cyclone for the lead. On lap 6, Hearn took the lead and began to open up the advantage.

Kolby Schroder suffered a right front suspension issue and stopped entering turn 1 to bring out the yellow on lap 10. After the restart, all heck broke loose. Eddie Marshall, who was running third, went wide exiting turn 4 and hit the wall at the crossover. The hit shot Marshall back out into traffic, creating a melee that wrapped up ten cars. Everyone was ok, but four cars were eliminated for the rest of the night as a result.

A series of additional cautions partially tied into the aforementioned crash kept the field together, but once a sustained green-flag run began, Hearn pulled away.

A late caution due to a crash for Hoffman on the backstretch resulted in a Green-White-Checker, but Hearn would not be denied his first Lebanon Valley win of the year. J.R. Heffner was second, followed by Kenny Tremont Jr., Keith Flach and L.J. Lombardo.


The second feature saw Soltis start on pole and led handily early on. Unlike the first feature, the primary stars of the class were further back. Tremont started ninth and quickly made his way towards the front. Heffner and Hearn were 14th and 15th at the start and took longer to get in the hunt.

On lap 11, Tremont took second from Paul Gilardi and ultimately made quick work of Soltis to take the lead a couple of laps later. The race’s sole caution flew just after halfway when Matt Pupello slowed on course.

Once the race went back to green, Tremont pulled out to a big lead as the battles continued further back. Elmo Reckner continued his great recent form with a run up to second in the closing laps, but no one could do anything with the Sand Lake Slingshot. Tremont pulled away to take his 128th career Big Block win at Lebanon Valley.

Afterwards, Tremont was very pleased with his equipment.

“In the second race, the car was perfect,” Tremont said. “It was as good as I’ve had a car here in years. What I really hope is that we can repeat this.”

Reckner was second, followed by Keith Flach. Hearn and Heffner rounded out the top five.

In the Small Block Modifieds, Chad Pierce started from the pole and led early. Tremont had speed, but made a crucial error when he got in the car. He nicked the fuel release lever in the car so that the car wasn’t getting enough fuel to the engine. He would eventually stop on track and draw a yellow on lap 3.

Once the green came back out, Tremont (with the fuel lever in the proper position) charged through the field in a hurry. However, with no more cautions, he could only get so close to the front. At the front, Pierce spent part of the race battling with second-place starter Timothy Davis. However, Pierce was able to hold off Davis and eventually pulled away to take the win.

Davis held on for second, followed by Heffner. Pittsfield’s Brett Haas was fourth, while Tremont was able to get to fifth.

The Pro Stock feature was arguably the most exciting race of the evening. Rick Duzlak took the lead from pole sitter Tom Dean and pulled away from the pack. By the halfway point, Duzlak had more than a straightaway on the pack when Dean spun out of third to bring out the yellow.

Rob Yetman came up to second and spent much of the second half of the race battling hard with Duzlak. The two drivers spent multiple laps side-by-side for the lead, but Duzlak held him off. On the final lap, Duzlak and Yetman had to split the lapped cars of Jon Routhier and Jay Corbin, but Duzlak just beat Yetman to the line to take the win. Chuck Towslee was third, followed by Steven LaRochelle and Jason Meltz.

In Sportsman, Lem Atkins took the lead away from Bobby DeLeon on the first lap and held on strong early on. It was not a great night for the top contenders as John Virgilio spun early and Jeff Watson hit the wall in turn 3. Both would finish, but further back than normal.

Chris Lynch was able to move up from the tenth starting spot and pass Atkins for the lead on lap 6. From there, Lynch held off a charging Michael Sabia to take his second career Sportsman win at Lebanon Valley. Sabia was second, followed by Robby Knipe, Kevin Arnold and DeLeon.