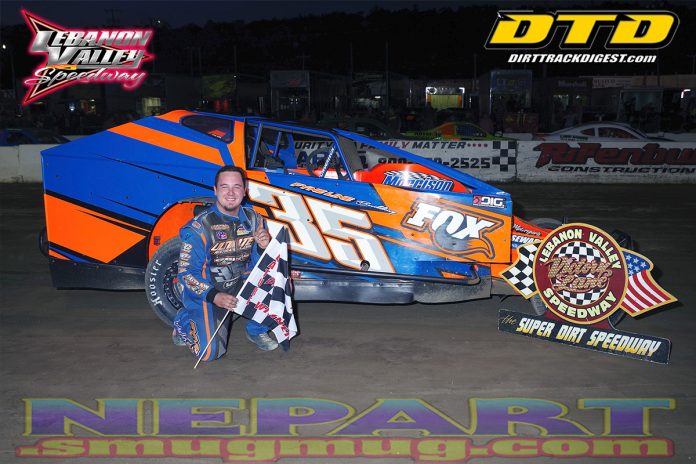 WEST LEBANON, NY – Saturday night brought warm weather and no precipitation to Lebanon Valley. The time was nigh for some good racing and the fans got it on Saturday night, along with a first-time winner.

Mike Keeler, who has dealt with a number of mechanical issues this season, started from the pole. On this night, Keeler did not have mechanical woes and led early.

A series of incidents kept the field close early on. First, Kyle Sheldon spun in turn 3 to bring out the caution on lap 3. On the restart, Ken McGuire spun and hit the wall in turn 1. McGuire and Sheldon were able to continue. The next restart was aborted due to additional contact.

The next restart saw contact between Paul Gilardi and Sheldon in turn 2 that resulted in another yellow. However, before that yellow was thrown, Danbury’s L.J. Lombardo was able to slip past Keeler for the lead.

Back in the pack, Brett Hearn had some issues in his heat race and started back in 18th. From there, Hearn quickly moved up the order, methodically picking off driver after driver. His primary rivals in the championship were stuck further down the order.

J.R. Heffner was on the move as well, slowing advancing from 12th. Heffner got to third, but could not make all that much progress on Lombardo. Keeler hitting the wall brought out a caution with three laps to go, creating a new race.

On the restart, Heffner got past Kyle Armstrong for second and ran down Lombardo as fast as I could. On the final lap, the two went side-by-side in turns 3 and 4, but Lombardo out-dragged Heffner to earn his first Lebanon Valley win.

“I’m grateful that we didn’t start on the pole and that we didn’t just take off with it. We actually had to make some moves to get to it,” Lombardo said. “[Winning at Lebanon Valley] is a dream come true.”

The Small Block Modified feature was clean for the most part. Sean Mandel started from the pole and led early. Jason Herrington, the “Flyin’ Farmer,” gave chase. It took only a few laps for the Brunswick native to snatch the lead. Once there, the gregarious Herrington pulled away to a big lead.

Further back, Tremont and Heffner were on the move. Tremont’s Small Block was one of the ten fastest cars on the premises Saturday night and it showed in spades. Tremont quickly rose from the 14th starting spot to seventh in six laps. A couple laps later, he was in the top five. Heffner was close behind.

On lap 14, Tremont took second from Mandel and was staring down a huge gap to Herrington. That gap disappeared in a hurry as Tremont had at minimum, a half-second a lap on Herrington. With four laps to go, Tremont was able to get past Herrington for the lead.

A caution due to a spin for Brandon Pitcher in turn 4 closed up the pack for a three-lap sprint. However, no one could prevent Tremont from taking his second Small Block win in a row.

On the final restart, Heffner was able to get past Herrington for his second second-place finish of the night. Herrington was third. Frank Hoard III was fourth, while Demetrios Drellos was fifth.

In Pro Stock, Tom Dean started on pole with multi-time champion Jay Corbin alongside. It has been a tough start to the 2017 season for Corbin, who has shown speed but had issues. Saturday night was more of the same.

Corbin took the lead from Dean on lap 2 and seemed to have some good pace. Unfortunately, the bad luck struck again. Corbin cut a tire exiting turn 2 on lap 7 and spun trying to get into the pits to bring out a caution. He would eventually finish 17th.

Corbin’s spin put Jay Casey in the lead with Chuck Towslee close in tow. The two fought hard for the lead. The battle was fierce. Towslee was able to get past Jay Casey, but Jay Casey wasn’t done. He jacked up the rear end of Towslee’s No. 23 entering turn 3, then went to the inside. More contact was made. Unfortunately, this contact ultimately broke his right front corner, ending his night.

Jay’s son, Jason Casey took over second as a result and tried to get to Towslee, but he could do nothing with him. Towslee held on to take his first win of the year.