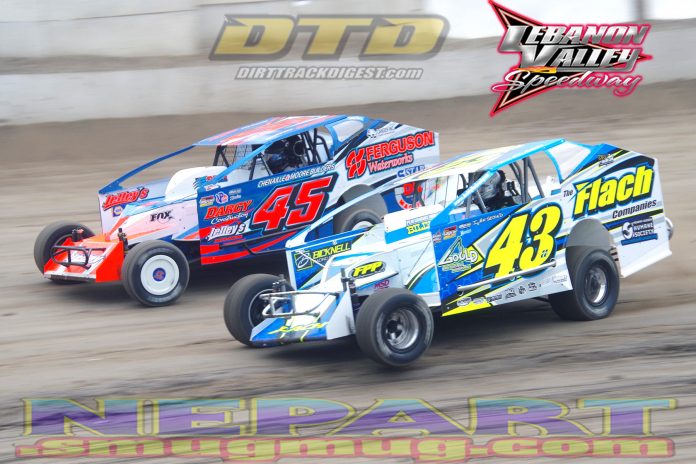 WEST LEBANON, NY – Saturday night brought some sketchy weather to Lebanon Valley Speedway. Rains came and stopped the program during the third Pro Stock heat. After the track was packed back in, the full card was completed.

The rain resulted in a very quick racing surface that usually makes it quite difficult to pass. No one bothered to inform Keith Flach of that.

Likely the biggest moment of the feature occurred on the very first lap. Paul Gilardi had a brief issue in turn 2. Elmo Reckner had to stomp on the brakes to avoid Gilardi and got hit from behind by Brett Hearn. Reckner spun while Hearn drove off with a bent right front corner.

Both drivers would continue after repairs. Hearn pulled out of the pits right after the restart, but got saved by an immediate caution when Mike King and Olden Dwyer got hooked together in turn 4. He would eventually finish tenth. Reckner ended up 20th.

Mike Keeler started from the pole and led early on. Kyle Armstrong, back after suffering injuries in a road accident, was hot on Keeler’s heels. L.J. Lombardo was not far behind.


On lap 14, Armstrong made his move to the inside of Keeler. The two Connecticut racers battled side-by-side for two laps before Armstrong assumed the advantage.

While the Armstrong-Keeler battle was going on, Flach was on a charge. Starting 17th, Flach glued his No. 43 to the cushion and drove up through the field in a hurry. He was already in the top 10 by lap 6 and in the top five by lap 17.

Flach was so fast in the outside groove that no one could really offer up a fight. Flach took second with six laps to go from Lombardo and ran Armstrong down in about a minute. With three laps to go, Flach took the lead and pulled away to take his first of the year.

Even though he looked amazing out there, Flach really didn’t see it.

“It didn’t seem quite like that,” Flach said after the race. “With traffic out there, we were making some passes. It felt good. I thought we were slightly better and we found the right lane.”

In the Small Block Modifieds, the feature was caution-free for the second week of the race. Ray Hall Jr. started from the pole and spent much of the race trying to maintain a gap on Brian Sandstedt.

Further back, points leader Kenny Tremont Jr. had a terrible heat race and was forced to start in 17th. From there, he slowly worked his way towards the front along with Brett Haas and J.R. Heffner.

However, with a fast race track and no cautions, progress was difficult at best. While Hall and Sandstedt turned quick laps without traffic, the points leaders had to fight and claw.

Hall led flag-to-flag to take his first Small Block Modified feature win. Sandstedt was close behind, followed by Brian Peterson. Heffner, who had the fastest lap of the race, was fourth. Timothy Davis was fifth.

The DIRTcar Pro Stock Series made their one and only visit to Lebanon Valley Saturday night. That meant appearance points for Lebanon Valley’s regulars, different rules and a higher car count.

Steven LaRochelle drew the pole after winning his heat race. He explained that the extra 200 pounds he had to carry made his car feel like a dog, but he was still very fast.

Once the race started, he was able to open a small gap up over Roch Aubin. Unfortunately for those competing, the race was a bit of a start-and-stop affair. There were nine cautions in the 30-lap feature. Most of these were for stopped cars, but there was a good amount of contact as well.

Rob Yetman, who won Friday night at Albany-Saratoga, quickly moved up to second and set his sights on LaRochelle. Once there, Yetman noticed a loose shock on LaRochelle’s No. 178. Despite the loose shock, Yetman simply could not get alongside the youngster. LaRochelle led flag-to-flag to take his first career Pro Stock win.

Behind LaRochelle and Yetman was Jason Casey in third. Robbie Speed finished fourth and Jon Routhier was fifth.