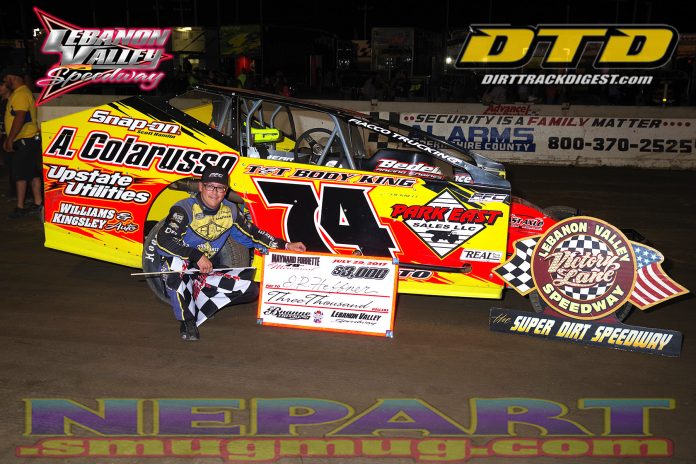 WEST LEBANON, NY – Saturday night was another opportunity to score some pay dirt at Lebanon Valley in the Maynard Forrette Memorial. With the track prepped for sprint car action, the course was fast and smooth. That doesn’t mean that bumping wasn’t out of the question.

Niverville’s John Ruchel started from the pole, but quickly lost his advantage to the Cyclone chassis of Kyle Hoffman. Hoffman was able to hold the advantage early on.

Saturday night was not a very good night for Kyle Sheldon. Sheldon spun in turn 1 to bring out the caution on lap 3. Shortly after the restart, Sheldon spun again to bring out another yellow after contact from Mike King. Sheldon would eventually finish a lap down in 13th.

On the first restart, Matt Pupello was able to take the lead away from Hoffman. Once up front, Pupello opened up a decent lead in what was his best run of 2017 to this point.

Then, the action picked up. An incident in turn 1 involving Denny Soltis and Brandon Pitcher brought out another caution. On the restart, J.R. Heffner was able to get past Hoffman for second. Shortly afterwards, L.J. Lombardo went hard into the turn 3 wall to bring out another yellow. King and Wayne Jelley were also involved.


Heffner, who had been shut out of Victory Lane so far in 2017, was chomping at the bit to restart. He jumped Pupello at least once, forcing a re-rack.

Once the race finally got back underway, Heffner ran Pupello hard in turns 1 and 2. There was some contact in turn 2 between the two drivers as Heffner was able to get past and take the lead.

Once out front, Heffner was able to pull away from the rest of the pack easily. Meanwhile, points leader Brett Hearn tried to charge from his 13th starting spot, but the going was tough. He got into the top five, but could not progress much more.

Heffner pulled away from the field and stormed to his first win of the season. Pupello was not happy afterwards and confronted Heffner after the race.

Heffner explained afterwards quite simply that it was time to go.

“Nah. You gotta get going when its time to go,” Heffner said. “[Our car] was a handful tonight, but it handled much better once we got out into the clean air.

“We got into the No. 42[P] a little bit [on the restart],” Heffner continued. “I didn’t mean for that, but I was trying to get that lead. You don’t want to hit the leader, or have any contact at all.”

Eddie Marshall took advantage of lapped traffic to get past Pupello on the final lap to take second. Hoffman finished fourth, holding off a tough charge from Hearn.

In Pro Stock, a DIRTcar Pro Stock Series race at Cornwall Motor Speedway in Ontario meant that the race was run for appearance points only. Despite that fact, it was still a great duel.

Nick Hilt started from the pole and quickly outdistanced Tom Dean to open up a small gap on the pack. That gap was short-lived as Nick Arnold stalled exiting turn 2 to bring out the only yellow in the race.

Once the green came back out, it was still Hilt up front. However, Jason Meltz was the man on the move. Starting seventh, Meltz moved forward in his No. 51 to put himself in position to battle for the lead.

It took only a few laps to Meltz to get to Hilt, but getting past Hilt proved to be very difficult. The two drivers fought side-by-side for about five laps for the lead. Meltz would lead one lap, then Hilt would be able to get him back. However, on lap 10, Meltz was finally able to make the pass stick.

Unfortunately for Meltz, all that battling allowed Chuck Towslee into the picture. Towslee took over second from Hilt on lap 12 and chased down Meltz. After a brief battle, Towslee took the lead away with three laps to go. From there, Towslee pulled away to take his third win of 2017.

Towslee believes that his team has really hit upon something.

“The car was handling good,” Towslee said after the race. “I think we’ve got some things figured out. PFC hooked me up with some new [brake] pads, which definitely helped. I’m liking the way the car is feeling.”

A disappointed Meltz ended up in second, followed by Hilt. Steven LaRochelle was fourth and Rick Duzlak was fifth.

In the 4-Cylinder class, Chris Vandeputte won the race overall and the Dual-Cam class in his Ford Escort. Chris White finished third and won the Single-Cam class.