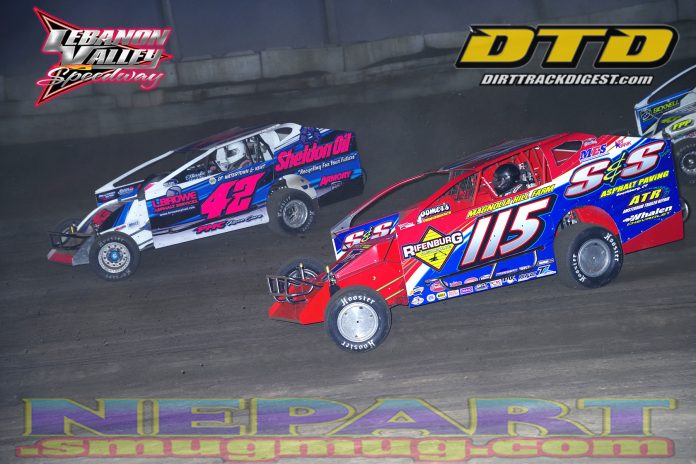 WEST LEBANON, NY – As a result of rain on Aug. 12, the Modified and Pro Stock classes both had double features Saturday night at Lebanon Valley. Both races ended with drivers in need of pay dirt picking up important wins.

Modified feature No. 1 saw John Ruchel lead early from the pole. Kolby Schroder moved up from the third starting spot and proceeded to give chase.

Following a caution due to a Mike Keeler spin, Kenny Tremont Jr. was the man on the move. Tremont quickly moved up from the ninth starting spot to fourth, then pressured the front runners.

Tremont made quick work of Schroder, who faded quickly due to handling woes. On lap 14, he took second from Wayne Jelley. Ruchel fell in less than a lap. Shortly afterwards, a yellow flew for Kyle Sheldon cutting a tire.

Tremont pulled away from the pack once the green came out. Only a late yellow for Rob Pitcher blowing an engine made the race interesting. Regardless, a good restart allowed Tremont to take his 130th career big block win. Jelley was second, followed by Brett Hearn, Matt Pupello and Keith Flach.


Feature No. 2 saw Paul Gilardi start on pole and put a small gap on Schroder. Further back, the main contenders had a heck of a time trying to move up the order.

Things changed significantly when Denny Soltis blew a tire and brought out the yellow on lap 14. Everyone bunched up and it was like a brand-new race.

On the restart, Schroder was able to get past Gilardi for the lead. Hearn entered the picture, making a number of passes. Tremont was further back, but still on the move.

Hearn had the fastest car most of the evening and put that speed to use. With a few laps to go, Hearn tracked down Schroder for the lead. A fierce battle erupted. However, Schroder was able to use the high line to hold off the multi-time champion to take his first win of the year.

“We just had to keep our momentum going,” Schroder said in the pits. “I knew that if I stayed up high and kept running my line, I could pull on him on the straightaway.

“Anytime you can beat Brett Hearn for a win feels good,” Schroder continued. “He’s the best in the business hands down.”

Behind Schroder and Hearn was Eddie Marshall in third. Gilardi finished fourth, followed by Tremont.

In the Small Block Modifieds, Kenny Aanonsen Jr. started from the pole and quickly lost his advantage to Ryan Charland. Charland had a pretty quick car that was good enough to finish seventh, but it was no match for Demetrios Drellos.

Drellos, who started sixth, quickly moved up to second and dispatched of Charland for the lead on lap 3. From there, Drellos ran off into the distance.

The real battle was for second between Brett Haas and Tremont. Haas gave Tremont plenty of room in the battle, but the Sand Lake Slingshot couldn’t get past. Haas admitted to bouncing off the rev limiter on the backstretch. He could not go any faster.

For Drellos, he pulled away to take his second win of the year. Haas was second, followed by Tremont, Frank Harper and J.R. Heffner.

Sportsman saw a rough and tumble beginning of the race with multiple incidents and one instance in which Lem Atkins ran over the right rear of Nikki Ouellette. Chris Curtis was able to get the lead away from pole sitter Zeb Catlin early, but Rob Maxon clearly had the best car.

Maxon moved up from sixth to snatch the lead away from Curtis on lap 11. From there, Maxon was gone. The No. 96 pulled out a big lead and won easily over Curtis, Alan Houghtaling, Lynch and John Virgilio.

Pro Stock Feature No. 1 saw Tom Dean start on pole and lead early. On the first lap, Steven LaRochelle spun in turn 4 to bring out a yellow.

Chuck Towslee got an incredible restart and was able to immediately put himself in the discussion for the lead. Jason Meltz took the lead briefly from Dean, but Towslee was able to get past both drivers.

From there, Towslee opened up a big gap on the field. A late yellow resulted in a three-lap dash, but Towslee held on to take the checkers over Meltz, Jon Routhier, Rob Yetman and Nick Hilt.

The second feature saw Rick Dempsey take the lead from Dean on the first lap. Cautions kept the field close, but it ultimately came down to Dempsey vs. Towslee. Towslee took the lead on lap 15, but the two continued to battle. Eventually, Dempsey charged a little too hard into turn 3, made contact with Towslee and spun out.

Once the green came back, Towslee charged to his second win of the night. Rich Crane was second followed by Yetman, Rick Duzlak and Ed Bishop.

However, both of Towslee’s victories are still unofficial as of press time

In Pure Stock, Al Relyea, Larry Perez and Ed Hatch each took wins. However, the third feature is unofficial due to a protest levied against Hatch.