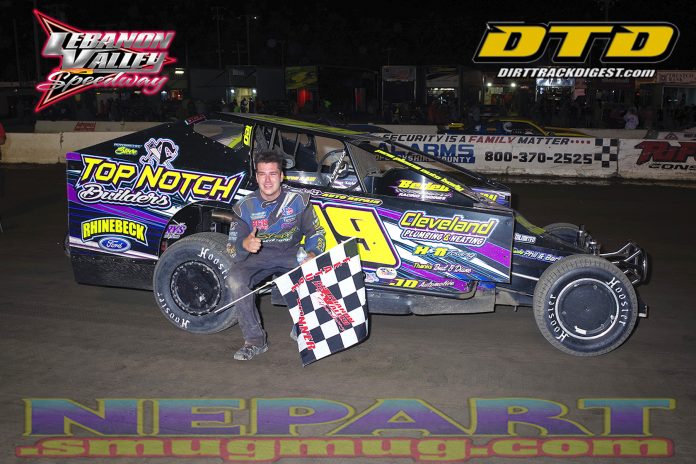 WEST LEBANON, NY- Rarely do you see the raw, genuine gut wrenching emotion that poured out not only in victory lane but in his post race interview. Kolby Schroder at 27, just became a man.

This isn’t a slight against the young speed merchant. He just raced against a man who has 901 career big-block Modified victories and held his ground to pick up his third career win at Lebanon Valley. Tears of joy, relief and all the other things you can think were streaming down the face of the Hyde Park, N.Y., resident.

“Happiness lies in the joy of achievement and the thrill of creative effort” so said Franklin Roosevelt. Its a fitting quote being that Schroder resides in Hyde Park, N.Y., where the FDR library is.


Paul Gilardi led the field down for the start of the regularly scheduled big-block feature event. Gilardi set of blistering early race pace trying to play the game of run out front and hide.

The first 14 laps were run under green with Gilardi setting the early pace with Schroder staying within shouting distance in second. With the caution coming out on lap 14, Gilardi’s time at the lead was just about over.

As the field went back to work on lap 14, Schroder was right on the loud pedal letting Gilardi know he was right there. Just one lap later, Schroder took the lead exiting turn two. Schroder wasn’t just going to be allowed to run away and hide. Not if Brett Hearn, Andy Bachetti and the rest of the field had anything to do with it.

Bachetti was up to fourth by lap 14, along with Wayne Jelly in fifth and Brett Hearn in sixth.

Just four laps later, Hearn was up to 4th while Bachetti was 3rd.

As Hearn hit the stripe on lap 22 he took control of second spot. For the next eight laps, Hearn reeled in and went toe to toe with the young big-block pilot. But in the end, Hearn just couldn’t get past Schroder allowing Kolby to pick up his first win of the year and just his third win ever at the Valley. Rounding out the top five were Eddie Marshall, Gilardi and Kenny Tremont.

In a raw and emotional, tear filled post race interview surrounded by his family and crew and as fellow drivers came over to shake his hand and offer their congratulations, Schroder had this to say about his win on the night.

“Its been a long time since we’ve gotten to victory lane. I won my seventh big-block race. Your kind of on the fast track and your not thinking about how much goes into winning one of these races. Crew guys away from their families, not being around my girlfriend due to working on the car every night of the week and sponsors believing in you because we don’t have the money to be competing with these guys on our own. To come through for them is really special.”

When asked about his late race adventure against Hearn, Schroder went on to add, “I saw Hearn there and I knew I had to hit my marks. I got good horsepower and everything it takes to win. I just said to myself don’t make any mistakes and hit my marks.

“I want to thank Top Notch Builders, Steve Daniels who gave me my big break to run a big-block and for being here every week.  Munson Satellite, which is a relatively new sponsor to us, and Cleveland Plumbing and Heating who has been with me since I was seven when I raced go karts.”

Schroder summed up his year by saying, “We haven’t had a night go our way all year. I had a right front go away in the first feature. We made some adjustments and here we are, winners.”

Schroder isn’t short on being thankful to his parents for their time and financial commitment to make it all happen. “Its my mom and dad Jim and Linda who have been believing in me. I’ve always wanted to go fast. I watched my dad work on Dickie Larkins’ car from the stands. I always thought these guys were superheros.”

In 358 action, Demetrios Drellos won in convincing fashion over Brett Haas and Kenny Tremont. It was Drellos’s 2nd win of 2017 in small-block action.

The Finish Line Chaplain: How We Forget – DTD Exclusive 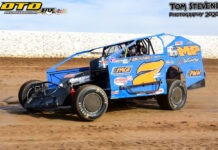