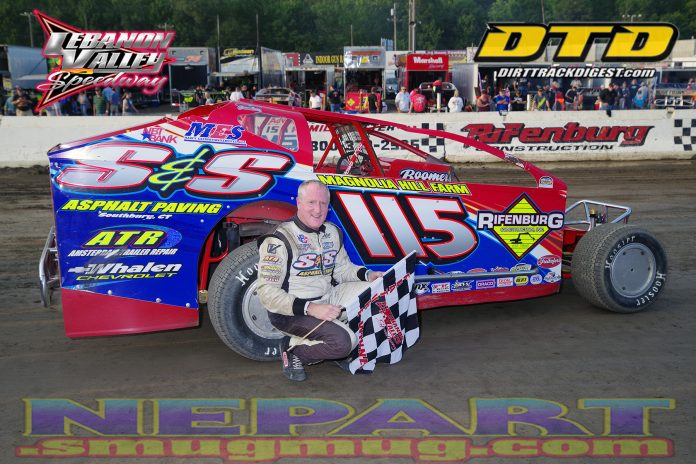 WEST LEBANON, NY – At 56, “Professor” Tremont shows the field he’s still capable of winning. Tremont picked up his 130th career big-block Modified feature win at Lebanon Valley Speedway. Coming into the night, Tremont was more than 110 points out of the point title even with two prior wins on the season. He sat fifth in points entering the night.

It was a week ago when torrential rains deluged the speedway forcing the big-block Modified feature to be held over to this week. In the make up feature, John Ruchel lead the field to the green with Kolby Schroder not wasting anytime applying early race pressure for the lead.

With just three laps into the 30-lap affair, the first caution waved for Mike King who had an incident in turn four. When the field went back to work it was still Ruchel leading the field with Schroder still in tow. Just three laps later, Wayne Jelly, utilizing Kevin Enders big-block power under the hood, would overtake Schroder for second and set his sights on John Ruchel who was racing the race of his life in the lead.

Coming from back in the field was the all time Modified feature winner Tremont. He was up to fourth by lap nine, and third one lap later.


As the race hit halfway, Wayne Jelly had reeled in Ruchel and Tremont was now well on his way to the front running third. Tremont would pass Jelly and Ruchel for the lead on lap 15. Just one lap later, the caution would come out and the fairy tale ending John Ruchel wanted would come to an end with severe overheating problems.

Tremont set a torrid pace for the second half of the event and was never challenged for the lead. Jelly finished second and Brett Hearn fought his way from downtown with a top three finish.

“I kind of like it dry and slick and slippery we got the car hooked up really tight and for a moment I thought it was too tight early but then the car really took off I was really pleased with it.” said Tremont of his win.

Tremont summed up his season at the Valley as “fair.”

“We’ve had some motor issues and got in accident so its been a fair season with the big block,” said Tremont.

Jelly was happy with his second place finish for the most part.

“We got a new Kevin Enders motor and its really turned are whole program around. Kevin’s got me in the game, the crew is doing its job. I just gotta do a better job. I left the door open and I was going to rotate up and come down across the seven Kenny being the veteran that he is snuck in there and I couldn’t come down my hats off to him on that move.  I didn’t know if anyone was on me the seven was holding me up and I couldn’t get around him. I felt that if I could have gotten out there to the lead Kenny wouldn’t have caught me. In the end I just got to do a better job of driving the car”.

By day, Tremont is a Professor of Automotive Technology at Hudson Valley Community College…

Ruchel led about ½ the race. That’s of little consolation to the 30-year veteran of a variety of forms of racing.

“We overheated and it got up to nearly 250 degrees. I think I had the race of my life going there. We’ve had overheating issues for the last two weeks. We need to reach out to the engine builder and the guy who I got the radiator from. Its a brand new car and its been a season of little things. We are working on a notebook for next year. We don’t know whats causing the overheating. It was a childhood dream of mine to be in this class.”…

JR Heffner had terminal engine woes with his big-block after dropping out of the first feature. A thoroughly disgusted Heffner was surly in his post race interview opting for “it blew up” before asking his crew members where he started in the 358 heat race.