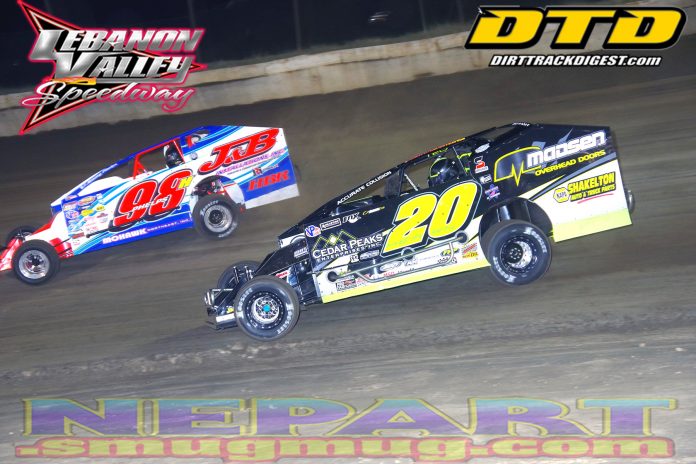 WEST LEBANON, NY – All it took for Brett Hearn to end his Super DIRTcar Series winless streak was a trip home.  The Sussex, N.J., dominated the Mr. Dirt Track USA feature at the Lebanon Valley Speedway for his 121st career series win and his first since August, 23, 2015 at the Cornwall Motor Speedway.

Hearn’s victory came in one of the highest paying series races of the season as the veteran driver pocketed $17,500 for his performance in the 101-lap main-event.  Hearn’s No. 20 started the race from the inside of the fourth row.  From there here made short work of the field in front of him taking the lead early and fending off all challengers as he took the win while ending Matt Sheppard’s five race series winning streak.

“We’ve been getting criticized for not winning a series race the last year and half so I guess if you are going to break out of a slump you might as well win the one that pays the most money,” said Hearn with a smile in victory lane.  “This will change the balance sheet for this summer pretty much.  Thanks to Howard (Commander) for giving us this $17,500 race to shoot for.  It makes being a regular here all worthwhile when you win the big one.”

Eddie Marshall redrew the pole position for the start of the race and quickly established himself at the front of the field as the green flag was dropped on the main-event.  Marshall survived an opening lap challenge from another track regular Keith Flach.  Flach looked low but Marshall’s line through middle allowed him to keep the top spot in the order.


Hearn, who started seventh, picked up two spots on the opening circuit as he watched the field get in line in front of him.  He used the next few laps to work over Jimmy Phelps before taking over fourth on lap four.  From there Hearn settled into a rhythm keeping the top three in his sights.

The first of three caution flags came on the 14th lap.  As Chad Jeseo battled with Larry Wight for eighth he got out of the groove in turns three and four catching the wall.  His car hit with the rear before the front end was sucked in as well causing him to spin with a damaged car at the top of the fourth corner.

The green flag fell on lap 19 with Hearn making an impressive move through turns one and two.  Hearn got to third as the field entered the first corner and by the time they hit the back straightaway he was out in front with the lead.  Hearn used daring three-wide crossover move between Marshall and Flach to put himself in the lead.

“I wanted to get past the four (Andy Bachetti) and I went into one and the 43 (Flach) went low and I got a good run on the outside,” cited Hearn.  “Eddie (Marshall) kind of slid up a little bit and the lane opened right up.  He came out sideways and lost the traction a little bit.  I had a good run from the top and that was all I needed.”

From there Hearn ran a steady line on the top side of the speedway.  Hearn kept his ride straight as he entered the corners doing all he could to make sure to not damage the Hoosier Tire on the right rear to make sure he was going to have enough late in the race.  Although he was taking care of his equipment, Hearn was still able to put distance between himself and the now second place running Marshall.

The second yellow of the event came on lap 30 as Tyler Dippel exploded the left rear tire on his No. 1.  This forced him to slow and stop on the bottom of the speedway in the second corner.  The pause in the action led to another double-file restart.

The race resumed at the 34 lap mark with Hearn showing no signs of slowing down.  Hearn utilized the outside lane for the restart allowing him to pull away from everyone looking to wrestle the position from him including the early leader Marshall.

Hearn stayed comfortably in front with traffic coming into play as the race reached the halfway mark.  He was patient in traffic taking advantage of the openings presented to him.  This patience gave Marshall some hope as the shortened the gap between himself and Hearn.

With one quarter of the race remaining it was all Hearn.  As he raced away Stewart Friesen began his assault on Marshall as he moved up the back bumper of the No. 98 searching for an opening.  Friesen first tried the low lane around the high-banked half-mile before trying the outside as well.  Marshall was able to keep him at bay.

Matt Papello watched as his hopes for a top 10 finish were dashed on lap 89.  Pupello spun on the bottom of turn two coming to a rest on the inner portion of the racing surface.  The field was afforded one final shot at Hearn.

As he had done on the previous restart, Hearn was up to the task when the green flag waved.  He shot out on Marshall and Friesen at the green.  The pair had nothing for Hearn has he led the final 12 laps of the feature event to earn his 903rd career feature win.

“It’s totally nerve racking I’m telling you,” mentioned Hearn.  “After the restarts you are feeling vibrations, then I’m thinking I’m running out of gas as the motor is stumbling.  We had other issues after the heat race with some oil issues.  It’s crazy, just a lot of anxiety.”

Marshall, of Richfield, Conn., had to settle for second after starting the race from the pole.  At one point it looked like he had something for Hearn as he closed in on him in traffic.  Unfortunately he came up one spot short to finish second.

“He was really running,” stated Marshall about Hearn.  “We kind of got tight in the middle of the race and I was laboring with that.  The longer it went the tighter it got. I knew if I was dead on I wasn’t going to go back by him too easy.  He was the class of the field.  He came back to us a little bit.  I think he was saving his tires.”

Marshall wasn’t expecting to see Hearn drive by him on the restart.  He expected a challenge from Flach at the time only to see Hearn shoot by underneath him.  He knew it was going to be tough challenge to overcome from that point.

“I was kind of surprised it was him,” commented Marshall.  “I thought it was Keith (Flach) down there.  When I saw that it was him I knew it was a big problem.  He was super strong.  I can’t be ashamed to run second the way he was running that’s for sure.  We were good, just not good enough.”

Friesen, a former Mr. Dirt Track USA winner, was the first non-regular at the speedway in the finishing order.  The Sprakers, N.Y., pilot had a solid night coming from tenth to take the checkers in the final spot on the podium.

“To be the first outsider, I love coming here, love racing here and to have a top three with those guys is good,” said Friesen.  “We were close there with Eddie (Marshall) but Brett (Hearn) was pretty much lights out.  We are happy for the Halmar (International) team.  We kind of righted the ship a little bit on the series here.  We’ve been working really hard in the shop the last couple weeks.  I think we are on to something, we got some grip.  I’m looking forward to see how that works out on Monday at Weedsport (Speedway).”

Lebanon Valley Speedway regular Kenny Tremont was steady the entire distance to earn himself the fourth position at the checkered flag.  Flach crossed the line in fifth only to be disqualified in post-race technical inspection for coming up light on the scales.  This gave the position to Mike Mahaney.  Mahaney was impressive on Thursday driving all the way from his 30th starting spot up to sixth before the disqualification of Flach.  Mahaney found a line on the bottom which allowed him to get by several drivers in the final 15 laps of the feature.

Hearn was the fastest qualifier on the night for the 64th time in his career with a lap of 19.474.  Heat race wins were taken by Flach, Hearn, Jimmy Phelps and Sheppard.  A pair of consolations were run with Anthony Perrego and Billy Whittaker securing wins.  Kyle Sheldon was the recipient of the KSE Hard Charger award after advancing from 31st to 22nd.  Matt Pupello and Sheppard were eligible for the DIG Safely 811 bonus for drawing the eighth and 12th starting spots respectively.  The Speedy First Aid Hard Luck Award went to Flach after his disqualification for coming up light on the scales.

The Super DIRTcar Series next hits the track on Monday, September 4, at the Weedsport Speedway in the Labor Day Double Play featuring the big-block Modfieds of the series plus a 360 Sprint Car open.  The winner on Monday night will take home $7,500 for their efforts.  For more information visit the track’s website at www.weedsportspeedway.com.