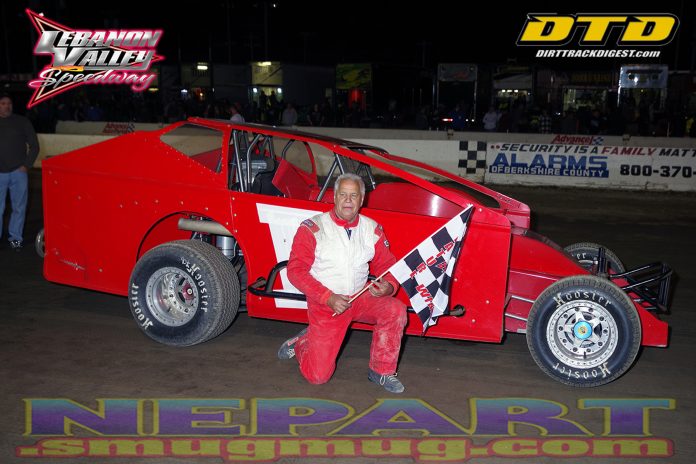 WEST LEBANON, NY – Saturday night was the final night of racing for the Modified and Pro Stock classes at Lebanon Valley. The championships had already been clinched, but that didn’t stop everyone from racing hard.

Denny Soltis, by virtue of winning his heat race, started from the overall pole with Niverville’s John Ruchel alongside. With cool conditions at night, Soltis was able to get a lot of bit and pull out to a decent margin over Ruchel.

Further back, it was rather difficult for drivers to advance up the order early on. J.R. Heffner, Eddie Marshall and Kenny Tremont Jr. spent the early portion of the feature just trying to get into the top 10. Champion-elect Brett Hearn was the exception to the rule. Hearn was tenth by lap 5 and seventh by lap 10.

As the race continued on, Hearn, Marshall and Keith Flach battled hard to move up the order. That allowed Soltis and Ruchel to get further and further away.

With six laps to go, Hearn was able to take third from Kyle Sheldon and set off in search of Soltis. However, it was way too late as the veteran campaigner took his first victory at Lebanon Valley since 2002. At 74, Soltis is the oldest driver to ever win a feature on the high banks. He has also won features in five different decades.

Afterwards, Soltis was overjoyed with his luck.

“Early in the night, [my car] wasn’t too good. I was actually pretty depressed,” Soltis said in the pits. “We made some changes…and finally got it where we needed to have it. The motor ran good, got lucky with no cautions. Pretty decent track with a lot of bite in it. We got lucky.”

By no means is Soltis done racing. He has already indicated that he will be back next year for another full season.

Soltis’ margin of victory was 3.877 seconds over Ruchel, who claimed his best career finish. Hearn was third, followed by Sheldon and Kyle Armstrong.

In the Small Block Modifieds, Brian Sandstedt started from the pole and was able to hold a steady lead over Kim LaVoy. Further back, J.R. Heffner was the man on the move. Starting 14th, Heffner quickly moved up into the top 10. By lap 11, he was fifth and knocking on Jason Herrington’s rear bumper for fourth.

However, Heffner’s charge more or less stalled there as the field got more and more stretched out. Meanwhile, LaVoy was consistently turning in faster lap times and slowly began to reel in Sandstedt.

Ultimately, Sandstedt and LaVoy were left alone as Frank Harper fell back into the clutches of Jason Herrington. Herrington managed to take third away with five laps to go, but no one could prevent Sandstedt from taking his first win in five years.

LaVoy was second, followed by Herrington. Heffner was fourth, while Brett Haas was fifth.

In Sportsman, Peter Carlotto led from the pole, but Whitey Slavin was right there from the start. Slavin desperately needed points to close in on Michael Sabia for the title.

For much of the race, the two PMC chassis racers drove away from the field. However, Carlotto’s handling seemed to go away late in the race. That allowed Slavin to get to the inside on lap 15 and take away the lead.

From there, Slavin pulled away to take his first win of the season. Carlotto was second, followed by Kevin Ward, Sabia and Virgilio.

Pro Stock saw Scott Govertsen start from the pole and lead early. Rick Dempsey pressured Govertsen quite a bit for the lead, but could not quite get alongside.

Dempsey continued to pressure Govertsen until he suddenly dropped off the pace on lap 9 and stopped on track to bring out a yellow. Dempsey tried to continue after repairs, but eventually pulled in and was credited with 18th. Steven LaRochelle took over second as a result.

Even though he’d already clinched the championship, Rob Yetman still wanted to snatch one more win. However, getting through the field was relatively difficult. On lap 11, Yetman had contact with Tom Dean on the frontstretch. While Yetman’s car wasn’t hurt all that bad, Dean’s hood flew up and blocked his vision, causing another yellow.

After the restart, Govertsen’s No. 117 began to fade. That put a big smile on LaRochelle’s face. The Dalton, Mass. native immediately put the pressure on Govertsen and snatched the lead away on lap 13.

From there, LaRochelle pulled away to take his second win of the season (the first to count for Lebanon Valley points). Nick Hilt finished in second, followed by Jason Meltz, Yetman and Jon Routhier. Govertsen eventually finished seventh.