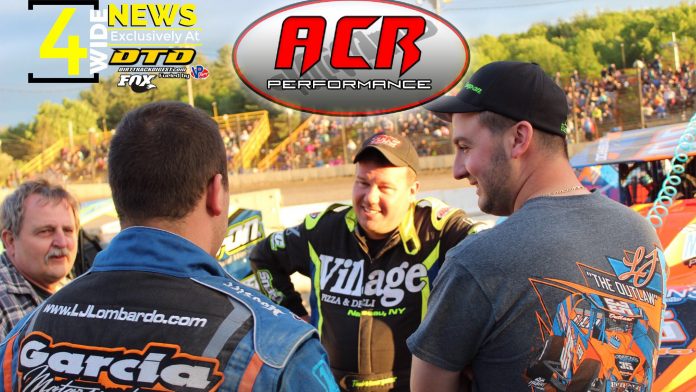 Ryan Hill/4WIDE – Robbie Albreada has been around racing his entire life, Working his way up the ranks of Andy Bachetti’s modified crew to Crew Chief, and later taking on the same roll for modified drivers LJ Lombardo and Frank Harper, Albreada now adds the title business owner to his resume’.

This winter Albreada officially launched ACR Performance.  ACR Performance will be servicing shocks, springs and aiding drivers with  overall set up for their cars.  Albreada started doing shock work on the side two years ago after doing Bachetti’s shocks for years while with his team.  This winter ACR purchased their own shock dyno with the help of ‘17 Glen RIdge Modified Champion Chris Curtis and his father.  Curtis is one of Albreada’s customers and after winning the championship on his shocks they stepped into help with the purchase of the dyno, which created Albreada Curtis Racing.

For the 25 year old Torrington, CT native now living in Averill Park, NY the business is a reflection of his passion for racing and an avenue for him to share his knowledge with drivers of every level.

“ I would say the main goal of the company is help out some of the guys and gals that may not have the most money or best equipment, but still want some help with their shocks, springs and car setup.  I am not just in it for the money, i find a lot of satisfaction in helping drivers that might not be the Hearns or Bachetti’s of the world go faster and actually have the opportunity to beat those caliber of drivers on any given Friday or Saturday night.”

Robbie’s father has been a long time Andy Bachetti sponsor so Albreada was hands on with racing since childhood. “I basically grew up at Andy’s race shop”, Albreada said. “My senior year of college i took on the crew chief position full time when Steve went to Hearn’s team.  Eventually I had to find a full time job, and started selling cars from log time family friend Matt Quinn, and now I have worked my way up to Business Manager at Toyota of Clifton Park.  I left Andy’s team on good terms, there wasn’t any hard feelings it was time for a job with benefits etc.  After having done Andy’s shocks for years I started doing some on the side and Pete Chuckta from PMC Fabrication allowed me to use his shock dyno for the last few years in order to help the not only the drivers I work with, but also drivers that drive PMC cars.”


After parting way with the Bachetti team and making the move to NY Albreada found himself helping Frank Harper on his small block modified car at Lebanon Valley.  Robbie’s sister would eventually start dating big block modified driver LJ Lombardo, and Robbie would take on the task of crew chiefing both cars weekly at the valley of speed.

LJ Lombardo is excited about the formation of ACR Performance :  “I’m extremely excited for ACR Performance to be kicked off. Robbie has been doing a phenomenal job with my entire team and his service is second to none. His dedication to this sport is stronger than I’ve ever seen before. I don’t just say this because he’s my crew chief and my best friend but I knew how dedicated he was years ago. Frank Harper and myself are blessed to have him apart of our teams and we both understand that he helps his clients as well as us. He always makes it a point to watch each feature to see how the cars are running with ACR shocks on them. He’s great with input also, he doesn’t just listen to a driver but he explains what he sees the car doing as well. One family that truly needs to be recognized is the Curtis family. They believe in Robbie just like I do. I see huge things happening in 2018 for ACR Performance and I’m truly grateful to be apart of it!