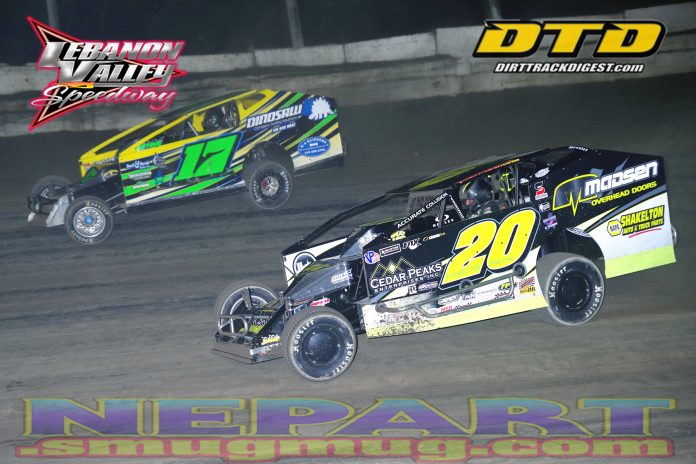 WEST LEBANON, NY – Promoters Howard Commander and Lyle DeVore announced today a new Lebanon Valley Auto Racing Corp. (comprised of Lebanon Valley Speedway and Albany-Saratoga Speedway/LVAR) policy regarding points and handicapping for their 2018 racing season. The new policy will be utilized when a conflict occurs with a DIRTcar NE Series date and a regular race night at either speedway.

In December (2017) when DIRTcar NE announced their tentative schedule for the 2018 racing season it included several Series race dates that would conflict with a regular Friday or Saturday point’s night program at other DIRTcar sanctioned tracks.

After review and discussion LVAR felt those drivers who wish to compete on the DIRTcar NE Series tour would be at a disadvantage in an attempt to run for their local track championship.

“We want to support all our local drivers who choose to travel to a Series event and represent our speedways at these competitive events,” stated Commander. “In addition, we feel our new policy may help to encourage other drivers to also become involved in the DIRTcar Series and continue the tradition of showcasing how strong our drivers are at every track they run.”

The new LVAR policy will mean that on a conflict night, during the regular point season, “show up” points will be awarded all drivers competing on that particular night for that particular DIRTcar class. “That’s not a change from what we have done to support DIRTcar Series events in the past,” stated DeVore. “What will be the significant change will be in the handicapping process.”


That change will be that on a conflict night the handicapping (money won) column will show zero dollars won for all competitors in that class. Previously, any driver who competed in a Series race at another track was credited as though he had won feature event, potentially negatively impacting their starting position in heat races the next event.

“Heat race starting positions at both tracks,” said DeVore, “…have been based on a driver’s average earnings for the prior three (3) races. By showing zero dollars on a given conflict night it means that all drivers in that class are being treated equally for handicapping purposes, having the same zero impact as “show up” points. Mathematically, it’s as though the conflict night never happened.”

DeVore continued, “In the past we have gone back to the prior three regular events to determine handicapping spots at the next event and are currently discussing if there are any alternatives to using money won for this part of the equation. We will update our teams before the start of the season if there are any further changes made to the handicapping process.”

“DIRTcar has left it to the individual tracks impacted to determine how they want to deal with the conflict. We want our drivers who commit to us weekly throughout the season, and each has done so for many years, to know that we support their racing efforts,” said Commander. “We felt this to be the most equitable way to do just that.”

For the two speedways there are several race nights in which this policy will be implemented for Big Block Modifieds beginning with Saturday, April 28, when the DIRTcar NE Big Block Modified Series will be running at Fulton Speedway (Fulton, NY).

“It’s the responsibility of the driver to notify us if they plan to travel to a Series event,” stated Commander. “We’re pleased to be able to work with our teams to help ensure they will not only be able to compete at a Series race but at the same time be able to run for one of our track championships. In addition, we don’t want anyone to not have the opportunity to run for a Series end-of-year championship and point fund.

LVRA requires drivers planning to run a conflicting DIRTcar Series event notify either Commander for Lebanon Valley or DeVore for Albany-Saratoga three days prior to the race night in order to benefit from the new point/handicapping procedure.

For further information drivers and teams should contact Lyle DeVore at lyle@albany-saratogaspeedway.com