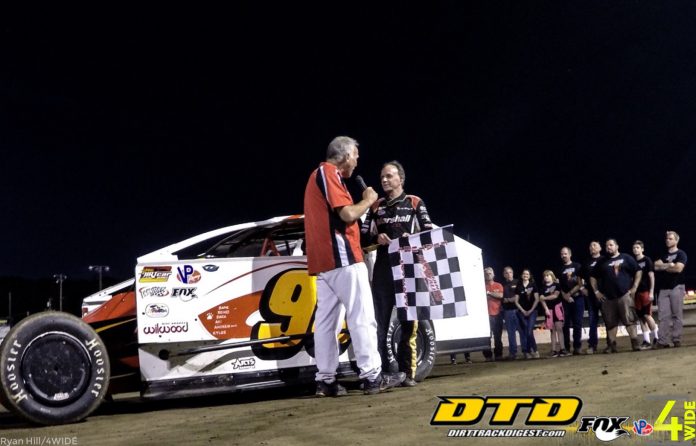 A familiar name was announced in victory lane Saturday night at Lebanon Valley Speedway when the dust settled from the 30-lap big-block Modified feature.  Eddie Marshall quenched a four year winless drought with a dominating performance on The High Banks.

Saturday’s victory comes one week after a wreck in the early laps of last Saturday’s feature ended the 98 team’s night early and set up a long week of working to get the Marshall Oil Co #98 Teo Pro Car ready to hit the Lebanon Valley High Banks this week.

“The car felt great,” Marhsall said.  “It has certainly been a long time since we have won so it was alot of fun to get back to victory lane.  We had a little work to do after last weekend .The crew worked really hard and the guys down at Teo did a great job for us so it was really a good team effort.”

Once the mighty Modifieds began their assault on the valley of speed Marshall began his climb to the front, chasing down pole sitter Elmo Reckner who also retired early the prior week, but was fast out of the box this week.

Once Eddie took control of the lead around lap 15 he set sail and was set sail on his way to his 29th career victory.  Heading into the night Eddie was tied for 10th place on the all time wins list with Dave Leckonby, but as he crossed the line Saturday night Marshall now sits alone in 10th.

Lebanon Valley Speedway is never an easy win for anybody, and in his 35th season Marshall knows that every win is special.

“Some nights are your night. We unloaded off the trailer pretty good and had speed all night. We just fined tuned some things and that was it, but got a couple breaks in the race. Usually here it is quite difficult to win and you typically need a few breaks to go your way to get sprung free a little bit which we had tonight” 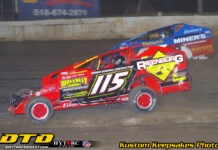