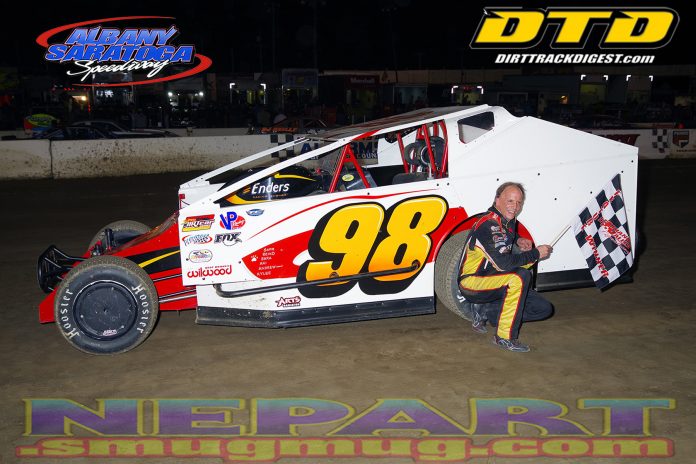 WEST LEBANON, NY – Eddie Marshall entered Saturday night with a long winless streak and a repaired car after a big crash. When the night ended, he walked out of Lebanon Valley a winner.

Elmo Reckner started from the pole and led convincingly over the rest of the pack. However, a spin for Mike Keeler and contact from Josh Marcus brought out the yellow on lap 7 and brought the field back together.

Further back, Brett Hearn had a tough time in a stacked heat race. Finishing sixth meant that he failed to make the handicapping. Once feature time came along, he was fast. Hearn started 16th and charged to the front.

After a second yellow due to L.J. Lombardo cutting a right front tire, Marshall went to work on Steve Hough for second. The two veterans swapped the position multiple times before Marshall was able to make it stick. Once in second, Marshall quickly ran down Reckner. It did not take long for the Marshall Oil Co. No. 98 to snatch the lead away.

Hough quickly followed Marshall past Reckner in order to regain second. Unfortunately for Hough, he could not do anything with Marshall. Further back, Hearn was continuing his charge. On lap 18, he took third from Reckner and worked to run down Hough.

While Hearn was able to get past Hough for second with three laps to go, it was too late as Marshall held on to take his first Modified win since 2014.

“We need [the win]. It’s been a long time,” Marshall said in the pits. “The car exceptional, handling-wise. That was the difference for us as compared to the other night. We’ve had the power all along, just needed the handling.”

Hearn was second, followed by Hough and J.R. Heffner. Brian Berger was fifth.

In the Small Block Modified feature, it was the Davis show early on. Ricky Davis started from pole while Timothy Davis gave chase. After a couple of laps of battling, Timothy was able to dispatch Ricky for the lead.

Kenny Tremont Jr. finished 14th in the Modified feature and was somewhat disappointed with his car. His Small Block Modified experience was the reverse. Tremont started 13th and quickly rose up the order. By lap 6, he was already up to fourth.

It did not take long for Tremont to scythe his way through the Davises and take the lead. From there, Tremont was off to the races and no one could hang with him as he took an easy victory.

$2,000 for the winner was up for grabs in the Andrew Sherman Memorial for Sportsman drivers Saturday night. John Virgilio started from pole and quickly staked his claim to the lead.

Further back, there were plenty of issues further back. Nikki Ouellette ran as high as second before impacting the wall. Later on, defending race winner Chris Lynch spun in turn 1, collecting Rob Maxon and Kevin Ward.

With the attrition in play, no one could touch Virgilio, who led flag-to-flag to take a swell victory. Michael Sabia finished second, followed by Whitey Slavin and Peter Carlotto. Chris Curtis finished fifth.

The Pro Stock feature contained plenty of action. Tom O’Connor started from the pole and led early on. Steven LaRochelle quickly moved up to second and put the pressure on O’Connor.

Then, the incidents started. The first caution came out due to a crash on the backstretch involving Nick Arnold, Joe LaFlamme and Dave Stickles. Shortly after the restart, two separate spins involving Nick Reilly and Scott Kilmer brought out another yellow. Both drivers were able to continue.

LaRochelle was able to get a good run on O’Connor and snatched the lead away on lap 4. Jon Routhier followed past into second.

LaRochelle was never able to truly get away due to the incidents. Ed Bishop spun in turn 1 and collected Stickles. Doug Olds hit the wall in turn 2. Finally, LaFlamme was taken out late in the race, ending his night with significant damage.

The race came down to a battle between LaRochelle and Routhier. With a couple of laps to go, the leaders encountered Stickles, who was being lapped. LaRochelle made the incorrect decision in regards to lane choice that gave Routhier a chance at him on the final lap.

Despite the bad move, LaRochelle was able to hold off Routhier by half a car length for his first win of the year. Routhier was second, followed by Jason Casey, Rob Yetman and Jason Meltz.