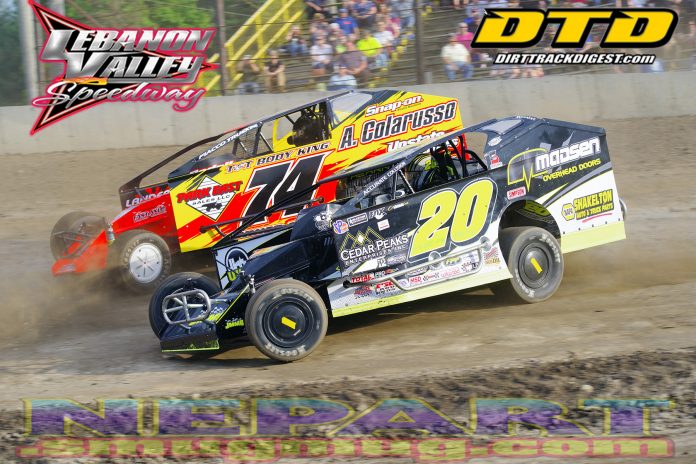 WEST LEBANON,NY – Saturday night marked the J.C. Flach Memorial at Lebanon Valley Speedway. The race is in honor of the selfless Modified racer who died at the age of 29 in 2012 from injuries suffered at his house. The race was held on the sixth anniversary of his only career Modified victory.

Saturday night saw the Modified class race in Flach’s memory. Olden Dwyer started from pole, but second-place starter Mike Keeler was hot on his heels. On lap 3, Keeler was able to snatch the lead away. Just after that occurred, Steve Hough and Mike King spun in turn 4 to bring out the first yellow of the race.

Immediately after the restart, Dwyer and Kyle Sheldon collided and hit the wall in turn 4 to bring out another yellow. Dwyer was eliminated in the crash, while Sheldon pitted for repairs and continued. He would finish 13th.

A third caution on lap 5 due to a crash for Dave McFeeters kept the field close together. It also allowed drivers such as Brett Hearn, Keith Flach and Kenny Tremont Jr. to gain spots and stay close.

Hearn, who started 15th, was already in the top five by lap 6 and only continued his charge. Brian Berger had put himself into contention along with Ronnie Johnson, but Hearn dispatched them to move into second. Only Elmo Reckner stood in Hearn’s way, but Hearn got past Reckner for the lead coming to halfway.

“I had a great, great race car tonight. It was a team effort from Madsen Motorsports,” Hearn said in Victory Lane. “We’ve been consistent all year coming from deep in the pack and scoring top-four [finishes]. I knew if I kept doing that, the wins would come.”

Flach was able to finish second in his brother’s memorial race, followed by Johnson. Reckner was fourth, while Tremont was fifth.

The Small Block Modified feature was likely the most competitive of the night. Alan Houghtaling started from pole next to Dillon Steuer. This would be a race to forget for Steuer. On lap 2, Steuer got in the back of Chad Pierce, spinning out the No. 83. Steuer was judged responsible and was sent to the rear. Just after the restart, Steuer had contact with Ryan Charland, spinning Charland out as well to bring out another yellow.

After an incident involving Frank Harper, Brian Sandstedt and Brian Peterson brought out the third yellow on lap 6, an epic duel began. Houghtaling, J.R. Heffner, Jason Herrington, Andy Bachetti, Kenny Tremont Jr. and Brett Haas staged an incredible back-and-forth battle for the top spots. The action was fast and furious as Heffner charged through from the 11th starting spot to battle at the front.

On lap 10, Heffner was able to snatch the lead from Houghtaling, but not before having to go three-wide multiple times. Tremont followed past into second.

Heffner was able to hold on from there to win his second feature of the year. Tremont was second, followed by Harrington, Haas and Bachetti.

The Pro Stock feature saw a lot of action, but had trouble getting started. Second-place starter Ed Bishop was leaking fluid at the green flag, which forced a quick yellow. On the restart, June 2nd winner Steven LaRochelle spun and hit the wall in turn 1. LaRochelle drove the No. 178 back to the pits, but it was curtains for his race.

Rob Yetman has had some uncharacteristic struggles recently, which gave him the fifth starting spot. It did not take long for Yetman to get to the front. A grand total of four laps to be exact.

Pole sitter Joe LaFlamme was able to stay right up in the hunt until he hit the wall in turn 4 to bring out another yellow. He was able to continue, bringing his Dale Earnhardt-inspired No. 60 home in 18th.

In the second half of the feature, Rick Dempsey closed up right on Yetman’s tail and gave him a legitimate race for the lead. Despite a legitimate scare when the duo ran up on the slower Nick Hilt on the backstretch, they managed to keep it clean to the finish.

Yetman was able to hold off Dempsey to take his second win of 2018. Dempsey was second, followed by Jason Casey, Jay Casey and Rich Crane.

Note: There are in fact two Jay Caseys in this race. The fourth-place finisher is from Massachusetts, while the seventh-place finish is from Canaan, Ct. and is the father of Jason Casey.