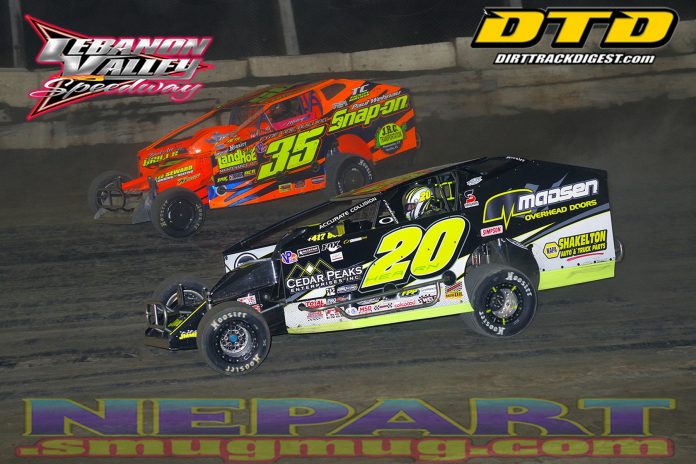 CONCORD, NC – This year the stakes are higher than ever as the winner’s share of the Mr. Dirt Track USA 100 has ballooned to $25,000 dollars, and as if that isn’t enough, the Mr. Dirt Track USA title also comes with a guaranteed start in the Granddaddy of all Big-Block Features during NAPA Super DIRT Week XLVII. Series competitors will descend on the West Lebanon, NY race track after a couple of weeks off from the tour. With the Championship point standings tight at the top, drivers will be eager to put their stamp on the final leg of the season.

Matt Sheppard has a narrow lead over challengers Erick Rudolph, Max McLaughlin, Jimmy Phelps, and a charging Danny Johnson. Sheppard has claimed five Series wins in 2018, but he appeared mortal in the last few contests. Erick Rudolph has only one win, but has been consistent throughout the year, grabbing podiums and top-five finishes.

52 Super DIRTcar Series races have been completed at Lebanon Valley Speedway, a high-speed 5/8-mile paperclip with high banks in the corners. One name has been synonymous with Lebanon Valley Speedway, and that’s Brett Hearn. He’s captured 15 Series wins since his first in 1981. Hearn also holds the track record, which he set in 2016 with a 19.236-second lap. At last year’s Mr. Dirt Track USA, Brett The Jet Hearn, used home field advantage to break his winless streak that had persisted since 2015. Hearn took home a $17,500 check and regained his winning confidence.

Joining the Series on the card are Sportsman Modifieds, Pro Stocks, and Pure Stocks. General Admission is only $24, with indoor box seating for $35. Be sure to come out early to catch Hot Laps and Time Trials.