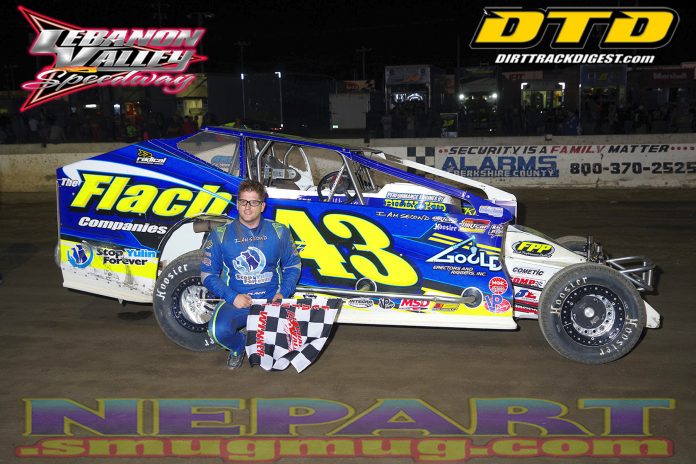 WEST LEBANON, NY – Saturday night brought dry weather and fierce racing as the Modified class had their final night of regular points. Brett Hearn entered the night with a nine-point lead over Ronnie Johnson. A podium would get him the title no matter what, but it didn’t turn out to be necessary.

Paul Gilardi started on pole and led early in a start-and-stop feature. L.J. Lombardo’s night ended almost immediately with mechanical issues. Mike King didn’t fare much better as a cut tire put in the pits. He would retire shortly afterwards.

The man with the fastest car early on was Eddie Marshall. It took only three laps for him to get up to second from sixth. He then proceeded to stalk Gilardi for the next few laps before snatching the advantage on Lap 9.

Giving chase to Marshall was Kenny Tremont Jr., who followed Marshall past Gilardi into second on Lap 10. Further back, Hearn was quickly making his way up the order with Johnson right behind him.

Ultimately, the title was decided when Johnson cut a right rear tire on Lap 13, bringing out a yellow. Johnson would get a new tire and continue, but his title chances were over. He would finish 11th.


The second half of the race saw a four-car pack break away from the field. Marshall, Keith Flach, Tremont and Hearn pulled away to settle things among themselves. Marshall seemed to have the pace for victory, but lapped traffic slowed his pace and allowed Flach to run him down.

On the final lap, Marshall was balked by slower traffic. In addition, Bobby Hackel, IV blew a right rear tire. That was enough for Flach to get alongside and out-drag Marshall to the line for the win.

“Our car was pretty good tonight,” Flach said afterwards. “We were able to maneuver in traffic a little bit better…than we have in the last couple of weeks. You’re better off being the second guy in lapped traffic towards the end than the leader. Ended up panning out that the outside was open and got a decent run [off of Turn 4].”

Marshall was three-hundredths of a second back in second. Tremont was third, while Hearn’s fourth-place was enough to take the championship. Kolby Schroder was fifth.

In the Small Block Modifieds, attrition was the name of the game. 23 cars started the race, but only 13 finished.

Brandon Lane led the field to green and showed great pace early on. However, he was involved in an early crash in Turn 2 along with Brian Sandstedt, Jason Herrington, Frank Harper and Alan Houghtaling. That gave the lead to 16-year old Dillon Steuer, who showed a lot of pace Saturday night.

Points leader Tremont started way back in 17th, but used the cautions to put himself right into contention. It only took seven laps for Tremont to get all the way to second.

Meanwhile, the trouble continued. Brett Haas had a mechanical failure and fell off the pace directly in front of J.R. Heffner. Heffner had nowhere to go and ran into Haas, spinning both cars out. Another crash eliminated Kim LaVoy. Finally, in the scariest incident of the night, Lorne Browe flipped his No. 14 in Turn 2. Everyone walked away from these incidents.

The second half of the race was caution-free, allowing Steuer and Tremont to settle things among themselves. Steuer was strong, but got loose late. Tremont was able to capitalize on Steuer going too high in Turn 2 to take the lead with five laps to go. From there, Tremont held to take his fifth win of the year.

Steuer finished second, but was quite disappointed with the result. Andy Bachetti was third, followed by the damaged car of Jason Herrington. Ricky Davis was fifth.

The King of Dirt Pro Stock Series rolled into Lebanon Valley Saturday night for 30 laps of action. The result was a pretty clean race.

By virtue of the redraw, the Caseys locked out the front row with Jason’s No. 324 on the pole. Early on, there were some issues. Following an early yellow for a slow car, a stack-up in Turn 4 after Don Collins nearly wrecked caused Doug Olds and Tom O’Connor to have contact and spin. Both drivers were able to continue.

Jason Casey had struggled early in the evening with a tight race car and noted that he was looking to make changes. Then, the track came to him as the night wound on. As a result, no changes were made to his Pontiac. By race time, it was perfect.

After the restart, Jason Casey was part of a five-car breakaway along with Jason Meltz, Chuck Towslee, Rob Yetman and Jay Casey. Jason Meltz tried to get a run on the No. 324, but instead fell into the clutches of Towslee and Yetman. The battling allowed Jason Casey to get away.

Breaking free of the pack allowed Jason Casey to run his own race. That allowed him to drive as fast as he could, ultimately more than necessary. Jason led flag-to-flag to take the win. His margin of victory was 6.834 seconds over Jason Meltz. Yetman was third, followed by Towslee and Jay Casey.

In Pure Stock, Gary O’Brien, Jeff Meltz Jr. and John Devine each took victories. Jeff Meltz Jr. then won the Boomer’s Performance Purestock Classic at the end of the night.

Note No. 1: Keith Flach drove in place of Olden Dwyer.

Note No. 2: There were three Sportsman entries driven by Rob Maxon, Nikki Ouellette and Michael Wagner Fitzgerald that competed in the race. They were not scored. Fitzgerald broke early, while Maxon and Ouellette came across the line in 11th and 12th on-track, respectively.