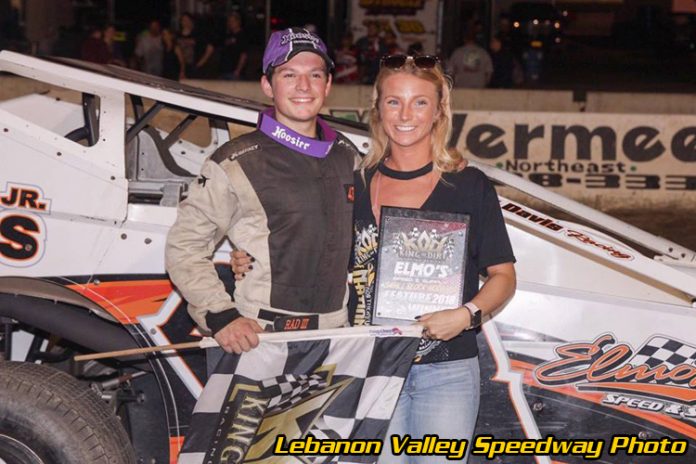 By virtue of the post-heat redraw, Ricky Davis earned the pole position in his MAC Tools No. 43. Orange County Fair Speedway regular Allison Ricci was along and haunted Davis for much of the race. That said, Ricci wasn’t the only one in the hunt.

Ronnie Johnson started fourth and made short work of Demetrios Drellos on the start to move up to third. Despite a great deal of speed, Johnson couldn’t contend with a slightly higher line than normal and clean air for Davis.

Despite that, a number of cautions kept the field close. Early on, Matt Pupello spun in Turn 4 to bring out a yellow. Last week’s winner L.J. Lombardo was second fastest in time trials, but an issue with a wheel brought him to pit road on Lap 14. He would eventually finish 11th. Shortly after the restart, Brandon Pitcher spun out in Turn 4 to bring out another yellow.

While Davis, Ricci and Johnson pulled, there was a big duel for fourth between Brett Haas, Drellos and Kenny Tremont Jr. The racing was hard and clean, but Haas managed to hold on.


In the closing laps, Ricci began to close in on Davis and looked to really have something for the young Vermonter. However, Ricci went a little too hard into Turns 1 and 2 and got too high. That was all Davis needed in order to take his first career win.

“[Our car] was very good tonight,” Davis said in the pits. “We’ve worked very hard this year with the help of Dave Prime Jr. and Bryan Burns with us as sponsors. We’ve been fast the past couple of weeks. Just been trying to get the right opportunity. We got the opportunity tonight, got lucky in the redraw and…we made it happen.”

Ricci was just able to hold off a charging Johnson for second. Haas was fourth, followed by Drellos. Bobby Varin finished eighth and claimed the King of Dirt 358 Modified Series championship.

In the Sportsman class, there was a veritable pick’ em at the top of the point standings. Whitey Slavin entered the final night of the season with a one-point lead over Chris Curtis. Peter Carlotto and Rob Maxon were also in the hunt.

Ted Teal started from the pole and led early. Meanwhile, fellow front row starter Karl Barnes ran into immediate problems. Barnes dropped back at the start, then went into the wall in Turn 3 to bring out the first yellow. Barnes was unfortunately done for the evening.

The championship battle was supposed to be a heads-up duel, but never turned out that way. On Lap 2, Curtis had contact with another driver and hit the wall exiting Turn 4. The contact hurt Curtis’ car and eventually forced him to slow. A caution allowed him to make a pit stop and continue.

Incidents for Vinny Visconti, Zach Lauster and Colin Clow kept the field fairly close through the halfway point. In addition, Rob Maxon moved himself up to second and was in position to compete for the win.

Once the race went back to green, Virgilio made sure that the race for the win would not be competitive. Virgilio was able to pull away to take his second win of 2018.

Maxon was second and moved himself up to second in points while Slavin came home in third. The third-place finish was more than enough to allow Slavin to defend his Sportsman championship by 11 points. Tim Hartman Jr. charged from the 13th starting spot to finish fourth while Teal was third.