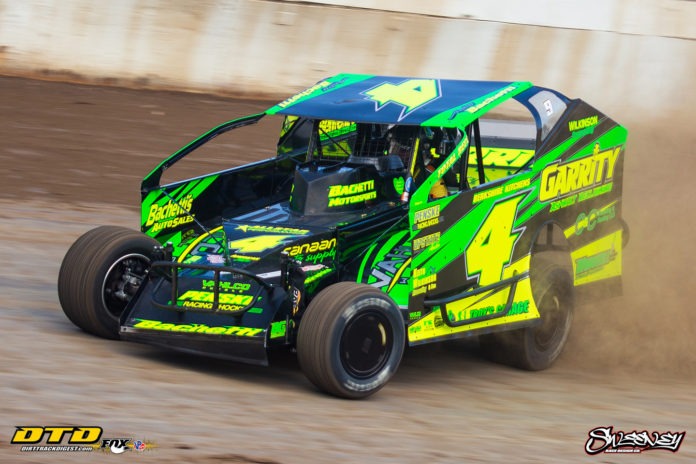 WEST LEBANON, NY – Andy Bachetti first passed 11 cars, then got by Ronnie Johnson just after halfway en route to the Big-Block Modified victory in the second week of action at Lebanon Valley Speedway.

Johnson took command over Olden Dwyer at the start of the 30-lap main, with Keith Flach chasing in third. Johnson didn’t want to hang around and play with Dwyer and Flach, quickly putting some distance between himself and the battle for second. A lap seven yellow for a slowing Bobby Hackel, who blew two motors in last week’s opener, erased Johnson’s two-second gap.

Prior to the yellow, Bachetti had charged from twelfth to fourth, over a car a lap. The pace remained matched on the restart, as Bachetti instantly disposed of Flach and went after Dwyer. With 11 laps in, Bachetti snagged second and was ready to face off with Johnson.

Both drivers opted for the bottom in turns one and two, with Johnson a lane up in three and four. Bachetti took a few swings down low in three and four, drawing even at halfway. The next time around, Bachetti stuck the pass and was scores leader come lap 16.

Once out front, Bachetti turned on cruise control and motored away. Eddie Marshall was making headway from ninth, taking fourth from Flach by lap 20. With ten to go, all Johnson and Dwyer could do was watch Bachetti drive off.

With minimal lapped traffic and generally clear track, Bachetti had a flawless final few laps en route to his first Lebanon Valley Speedway win of the year. Johnson came home second, while Marshall got Dwyer for third in the final laps, while Flach nabbed the last spot in the top five.

“It’s a tough crowd here, so to feel that good and pass that many fast cars to win is a big deal,” Bachetti said. “Running good in the Big Block is what we’re here for, I’m confident with the package we have and hope we can keep it rolling here. A lot of people here can win any given week, so to pass a lot of them and get a win was really fun.”