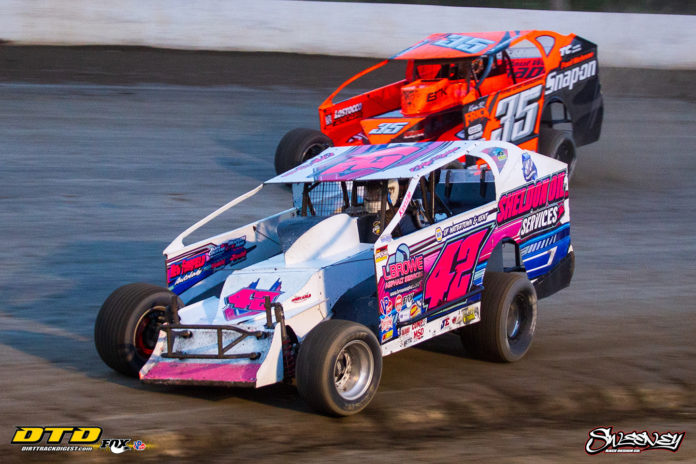 WEST LEBANON, NY – Kyle Sheldon wasted little time in the 30 lap Big Block Modified main event jumping to the lead early and never relinquishing it throughout the entire feature to pocket the $5,000 payday at the Lebanon Valley Speedway.

It wasn’t always smooth sailing for the 42 machine of Sheldon as he had to fight off a hard charging Rob Pitcher in the late stages of the race, but Sheldon was able to use the top side of the speedway to his advantage and stay out front.

In victory lane Sheldon was extremely happy with the performance of his car “I feel like I haven’t seen ya in 4 years. It feels so good to be back here.”

“Just to come here and be competitive against these guys is awesome” said Sheldon in victory lane.


In the 358 Modified feature it was Brett Haas who picked up the win in the 24 lap affair in dominating fashion. Haas took the lead from early race leader Brandon Lane on the 7th circuit and never looked back, cruising to his first win of the season on the high banks. Guy Sheldon finished in the runner up spot, with Timothy Davis third. Ray Hall Jr. and Jason Harrington rounded out the top five.

Haas was excited in victory lane after having some terrible luck a few weeks ago, “One word, redemption… We gave one up two weeks ago and I don’t think we’ve worked this hard in our lives after we blew both motors in the same night a few weeks ago.”