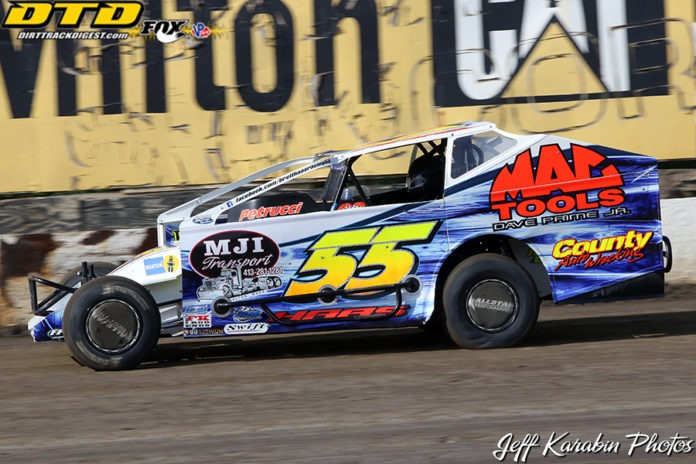 WEST LEBANON, NY – Brett Haas picked up a win in the small block modified division last week and he backed that win up with a win this week in the Big Block Modified 30 lap main event on Saturday night at the Lebanon Valley Speedway.

Mike King and Haas led the field of Modifieds to the green flag with Haas jumping out to the early lead and asserting himself in the front of the field.

Behind Haas though, the battle was on as Wayne Jelley made his way to third past Mike King on the 2nd lap with JR Heffner up to 4th and Peter Britten 5th.

By lap 7 Wayne Jelley made his way by Kyle Armstrong to take over the 2nd position and set his sights on the Brett Haas 55 machine, who had built up a nearly half straightaway lead.

On the 16th circuit Haas hit lapped traffic which allowed the Wayne Jelley 45 to close in, however Haas was able to hold Jelley at bay.


In a race that went green to checkers without a yellow flag, by lap 25 Haas was mired in heavy lapped traffic, which allowed Jelley to close the gap even further, to within only a few car lengths.  Coming down to take the white flag Jelley had his best shot at Haas and looked low in turns 3 and 4 but he could only get as close as the Haas left rear quarter panel, and Haas was able to pull away and go on to collect his first career Big Block Modified feature win.

Unable to hide his emotion behind his facemask, an emotional Brett Haas couldn’t believe he had gotten his first Big Block win.  “From when I came over watching my father race playing in the sand with matchbox cars to winning at the biggest stage at Lebanon Valley.  It’s just so many years, 26 years to get here, its just unbelievable.  To say this is a dream come true is a total understatement.”