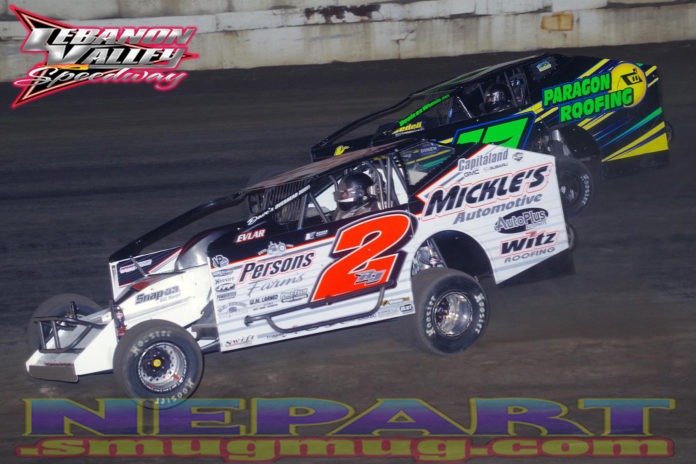 WEST LEBANON, NY – Saturday night brought some more action to Lebanon Valley Speedway. The racing has been popular on the internet recently and fans were treated to a mostly clean night at the track.

Mike King claimed the pole for the feature and managed to lead early. Fellow front-row starter Ronnie Johnson was right there early on and put the pressure. On Lap 4, Johnson was able to make the pass and take the lead from King.

Kenny Tremont Jr.’s night came to an end on Lap 5 when his car came to a stop in Turn 3, bringing out the only yellow of the race. The 19th-place finish hurt him significantly in the points.

Points leader Andy Bachetti started sixth and quickly moved up the order. On the restart from Tremont’s issues, he was able to get second from King. From there, Bachetti ran down Johnson and tried to make a move on him. Unlike a number of races lately, he was not able to get it done.

Ultimately, no one had anything for Johnson, who took his first win of the season.

“As far as [Bachetti’s] been this year, it was a little nerve-wracking having him back there,” Johnson said afterwards. “We had a good setup tonight, the car worked really well and we’re happy.”

Johnson’s victory moved him up to sixth in points, just three out of the top five. Bachetti finished second and expanded his lead to 33 points over Eddie Marshall. Wayne Jelley finished a somewhat distant third, followed by Kyle Armstrong and Keith Flach.

The Sportsman feature was another clean affair. Keith Johannessen started from pole in a car that has struggled at times. On this night, Johannessen described his car as “perfect.” He was able to lead with ease early on.

However, the fastest man on the track was Ryan Larkin. Larkin returned to Lebanon Valley to race after an absence of nearly a decade late last year. On this night, he was able to snag the lead from Johannessen on Lap 6.

From there, Larkin was off to the races. He slowly but surely pulled away from Johannessen and everyone else. Larkin remarked afterwards that he had no idea that he had as large of a lead as he did.

Larkin continued to pull away to win the caution-free Sportsman feature by over seven seconds. Johannessen finished a career-best second. Nearly 10 seconds off the lead at the finish was Robbie Colburn, who made a late pass of Peter Carlotto to take third. John Virgilio finished fifth.

The Pro Stock class had the annual Ol’ Buzzard 30, a 30-lap feature held in memory of the late Jimmy Langenback. Langenback was a smooth driver who raced his opponents fairly. The race ended up being fairly similar to a Langenback race.

By virtue of a redraw, points leader Chad Jeseo ended up with the pole with Steven LaRochelle alongside. The two ultimately ran away from the rest of the field and settled things among themselves.

The race ended up going caution free. The only incident actually occurred at the start of the race when Nick Hilt’s hood flew off. Since it landed between the outside wall and the catchfence, no caution was thrown. A similar incident occurred during the heat races when Johnny Rivers’ hood blew off on the backstretch and hit the billboards.

LaRochelle pressured Jeseo to the best of his ability. On Lap 7, he was able to get fully alongside the multiple-time Pro Stock champion. Jeseo was able to fend off the Dalton native and pulled out a small gap.

Further back, a small group of drivers fought hard over third. Rick Duzlak had it at first, but both Jay and Jason Casey were there to give chase, along with Tony Markou and Scott Towslee. Eventually, Towslee was dropped and fell back to the third group before retiring.

Jason Casey was able to get past Duzlak for third with 12 laps to go, but could make no ground on the leaders. Jeseo pulled away to take a big win and $1054. LaRochelle was second, then Jason Casey, Duzlak and Jay Casey.