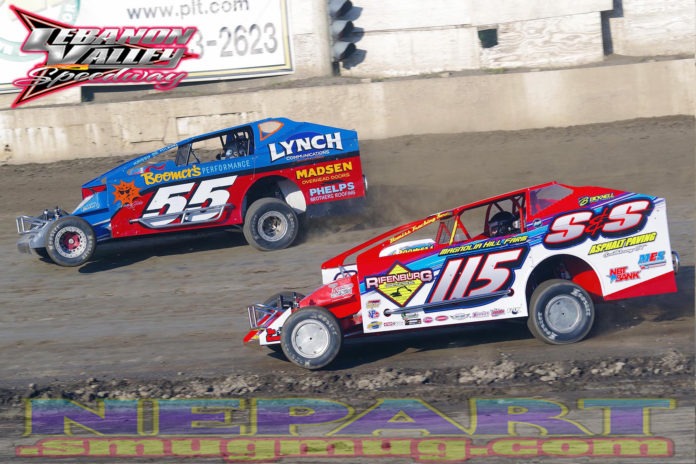 WEST LEBANON, NY – Prior to the start of the evening, Lebanon Valley Speedway officials announced that the Aug. 22 races would be the final races of the 2020 season. The lack of revenue due to not being allowed to have fans in the grandstands has hurt the track significantly. As a result, the pressure was on with only two races left for all the classes.

Mike King led the field to green, but trouble broke out immediately when Kyle Armstrong and Brett Haas had contact in Turn 1. This broke the front end of Haas’ car and spun him out. He was then hit by Denny Soltis to bring out the yellow. Haas and Soltis were ok, but done for the night. On the restart, Eddie Marshall, Kolby Schroder and Wayne Jelley came together. All three continued, but Jelley ended up 12 laps down at the finish.

King was able to hold off the pack early on as a small train developed. Olden Dwyer was second, followed by J.R. Heffner, Keith Flach and Kenny Tremont Jr. This held on until Ken McGuire had a catastrophic failure on Lap 13 to bring out the yellow.

On the restart, Tremont’s No. 115 came to life. He was able to move all the way up to second on the restart and immediately put the pressure on King. Two laps later, Tremont dispatched of King and took the lead. From there, Tremont didn’t look back as he drove away to claim his 139th career Big Block victory at Lebanon Valley, extending his own record.

“When we started the feature, we ran fifth…and I thought this was all we could do,” Tremont said. “Then, we got the yellow flag and got to cool the tires down. On that restart, it took right off. That was the key.”

The Small Block Modified Feature saw Brandon Lane start from the pole and lead early. Ryan Charland moved up from the second row and managed to snatch the lead away on Lap 6.

Charland was able to hold off the pack until a caution came out on Lap 11 due to a crash involving Lane and Frank Harper. This brought out a red flag to make some wall repairs.

Following the restart, Charland had Bachetti right on his tail. To his credit, Charland held off Bachetti as long as he could before the Sheffield, Mass.-native took the lead on Lap 16. From there, Bachetti pulled away to take his second win of the year.

Haas enters the final race with a one-point lead over Davis and eight over Bachetti.

In Sportsman, Bob Fachini Jr. started from the pole, but Nikki Ouellette was able to swoop into the lead from the second row. Shortly afterwards, Rob Maxon and Nathan Johnson hooked together and spun in Turn 2. At the same time, Bobby Chalmers hit the wall to bring out a yellow.

John Virgilio entered the night with a comfortable point lead, but spun in Turn 4 on Lap 13. He was able to come back to 10th, but lost ground in the standings.

Joey Coppola tried to run down Ouellette late, but could not prevent her from taking her first career Sportsman victory. Coppola was second, then John Stowell, Robbie Knipe and Ryan Larkin.

Pro Stock teams had a rough night. On the first lap of the feature, Rick Duzlak spun and hit the wall hard exiting Turn 2 while Daniel Sanchez (racing in place of Johnny Rivers), Doug Olds and Dave Demorest were also involved. Duzlak was ok, but needed a little time before exiting his No. 29. Another crash involving Sanchez, Shawn Perez, Tom Dean, Steve LaRochelle and others slowed the action.

Phil Arnold briefly ended up with the lead, then quickly lost that advantage to Tony Markou. Arnold would later get caught up in a crash with LaRochelle, Tom Dean and Chad Jeseo. This crash prevented Jeseo from locking up the Pro Stock title.

Once the dust settled, Markou was still in the lead with Jason Casey chasing. The younger of the Caseys tried many times to get to Markou’s inside, but he could not prevent Markou from taking his first career Pro Stock win. Jason Casey was second, then Nick Hilt, Jay Casey and Scott Towslee.

**- Johnny Rivers is listed in the results, but he did not compete Saturday night. Daniel Sanchez drove Rivers’ car as a substitute driver. As per track rules, Sanchez is able to earn points for Rivers.