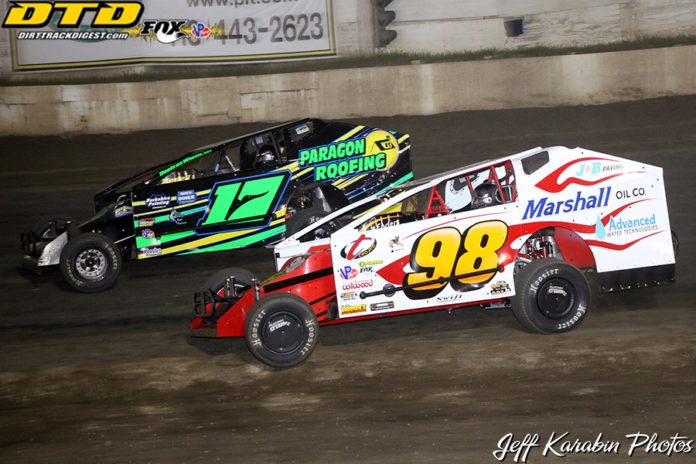 WEST LEBANON, NY – Saturday night was the final night of points racing at Lebanon Valley Speedway for the 2020 season. There were plenty of points battles to be had on the high banks.

In the Modifieds, Andy Bachetti entered Saturday with a 28-point lead over Kenny Tremont Jr. Staying out of trouble was imperative. It found him.

Denny Soltis started from the pole and ran well early. Rob Pitcher started on the inside of the front row and immediately put the pressure on the veteran racer. Soltis was able to use the outside line to hold off Pitcher’s charge. On Lap 7, Pitcher was able to get the lead from Soltis exiting Turn 4. Wayne Jelley and J.R. Heffner followed past into second and third.

Once out front, Pitcher began to pull away from Jelley. Meanwhile, Soltis was challenged for fourth by Brett Haas. Haas battled until an unusual right rear tire explosion resulted in a crash that also involved Marc Johnson and Kolby Schroder to bring out the first yellow. Schroder and Haas were done while Johnson was able to continued and finish eighth.

Bachetti ran into trouble on Lap 20 when he had contact with Eddie Marshall, cutting his left rear tire. With the benefit of a yellow, Bachetti was able to change his tire and get back out. He would finish 11th. With Kenny Tremont Jr. having issues, that was enough to claim the title.


Despite dealing with a glowing right rear brake rotor for the entire race and tires going away, Pitcher held on over the final 10 laps to take the victory.

“We had a really good car tonight,” Pitcher said afterwards. “We made a bunch of changes before the feature. I didn’t really know what was going to happen, but we ended up with a fast race car, so it all worked out.”

Mark Flach Jr. made a late charge to finish second, followed by Jelley. Keith Flach was fourth, while Marshall was fifth.

The Small Block Modified class had the closest championship battle of the night as five drivers were within 13 points. Brandon Lane started from the pole and had his best run of the season, holding off the field through the first half of the race.

The man on the move was Jason Herrington, the longest shot of the championship contenders. He started seventh and methodically made his way up the order, moving past Chris Curtis into second on Lap 10.

Meanwhile, Haas was leading the points by just one over Timothy Davis entering the race. He had a heck of a time moving up the order and spent much of the race in seventh or eighth. Davis was able to stay in front of Haas while the Pittsfield native did battle with Bachetti.

Harrington ran down Lane and took the lead on Lap 15. From there, Herrington pulled away to take the victory.

Lane held on for a career-best second. Olden Dwyer was third, while Davis crossed the line in fourth. That would have been good enough for the title, but he failed to make weight. The disqualification moved Curtis up to fourth and Haas fifth. That gave Haas the title by one point over Herrington.

The Sportsman class saw Angelo DiCarlo start on pole and lead early. After an early caution, Nathan Johnson was able to get past DiCarlo and take the lead.

DiCarlo ran well until he was eliminated in a multi-car crash in Turn 4 with Gary O’Brien. Nikki Ouellette, Jacob Perry, Matt Burke and Keith Johannessen were also collected. Johannessen’s night only got worse from there as he crashed out of the race on the following restart.

Nathan Johnson was able to hold off a late charge from Pat Jones to take his first career Valley Sportsman win. Joey Coppola was third, then Ryan Larkin and John Virgilio. Virgilio’s fifth-place finish was enough to give him his third Sportsman title.

Pro Stock saw Chad Jeseo clinch the title by signing in at the track. The feature itself had its moments.

By luck of the draw, Jason Casey started from the pole and managed to control the race. His father, Jay Casey, took second on the start. The plan was to pull away.

That went away when Tom Dean and Shawn Perez collided on Lap 4 and went into the inside wall to bring out the yellow. Dean ended up on top of the inside wall as a result.

On the restart, Scott Towslee was able to get past Jay Casey for second, but he could do nothing with Jason Casey’s No. 324. The younger Casey held on to take the victory over Towslee, Jay Casey, Ed Bishop and Doug Olds.

In Pure Stock, Brian Walsh, Dom Denue and Clifford Booth each claimed wins. John Devine finished fifth in Feature No. 2, which was enough to give him the title. In the 4-Cylinder class, James Street won overall and in Dual-Cam while second-place finisher Brandon Ely won the Dual-Cam championship. Gary Malloy Sr. finished a season sweep in Single-Cam.