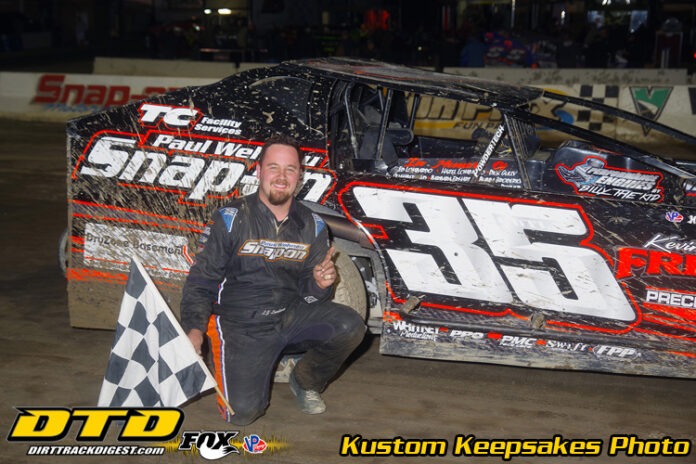 WEST LEBANON, NY – For 2021, L.J. Lombardo is racing full-time, splitting his time between full-time schedules at both Lebanon Valley and Albany-Saratoga, along with substantial Super DIRTcar Series and Short Track Super Series. The extra time working on his cars came in handy Saturday night.

Olden Dwyer started from the pole after winning his heat and ran well early on. Meanwhile, after an early caution, Mark Flach Jr. was able to move up into second.

The field bunched up on lap 5 after Timothy Davis cut a tire to bring out a yellow. On the restart, Flach was able to get past Dwyer for the lead, bringing J.R. Heffner along for the ride. Flach’s time at the front was very short-lived as Heffner took the lead away on the next lap.

Once out front, Heffner pulled out to a big lead on the field. Meanwhile, Lombardo was on the move as well, snatching second on lap 9. He didn’t seem to have much for Heffner, but engine issues struck the Valatie native on lap 13, ending Heffner’s night.

With Heffner out, Lombardo inherited a substantial lead with Dwyer in second. He was able to pull away from the pack. Marc Johnson entered the picture in the closing laps, but could do nothing to prevent Lombardo from winning.


“I think [J.R.’s car] fired better than mine [off the corner], but we were reeling him back in on long runs,” Lombardo said after the race. “That long, long green flag run when he broke and I led the rest of the race? Had that stayed green with me in second, we would have had a good race for the win. I think we had a good enough car to get to him, but getting to him and getting past are two different things.”

Johnson passed Dwyer with four laps to go for second. Eddie Marshall was fourth, while Andy Bachetti was fifth.

In Small Block Modified competition, Dwyer was on pole here as well. On the opening lap of the race, Ryan Larkin and Adam Gage both spun out in turn 2 to bring out a yellow. Opening night winner Bachetti also got a piece of the incident and was forced to pit for repairs. He would continue at the rear of the field.

Meanwhile, Bachetti was slowly making his way back up the order after his pit stop. By lap 10, he was seventh. A couple of laps later, he was in the top five.

Herrington was cruising until a collision between Kim LaVoy and Ryan Larkin brought out a yellow with three laps to go. By that point, Bachetti was up to third. On the restart, Bachetti made short work of Joey Coppola for second, but could not prevent Herrington from taking the win. Bachetti was second, then Coppola, Ray Hall Jr. and Brian Sandstedt.

A quick spin for Doug Olds brought out the caution for the first time on lap 5. This brought everyone back together, to the benefit of Chad Jeseo, who had started 10th and was slowly advancing.

On the restart, Stickles and Perez came together exiting turn 2 while fighting for second. Perez ended up hitting the wall hard, ending his night. The scramble resulted in Dean regaining second-place, but with Jeseo on his tail. It did not take long for Jeseo to dispatch Dean for second and set his sights on Hilt.

Much like opening night, Hilt went a little too high in turn 1 on lap 16. That was all Jeseo needed to get the lead. Once there, he held to take his second straight win. Hilt was second, then Dean, Zach Seyerlein and Towslee.