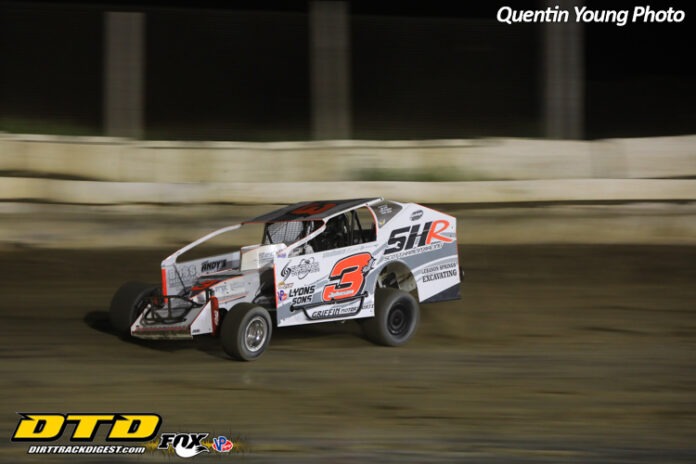 WEST LEBANON, NY – Saturday night was a warm one at Lebanon Valley, but the action was hot on the track. Marc Johnson ran down Brian Berger and took the lead in turn 3 coming to the white flag. From there, he held on to take his first victory at Lebanon Valley.

“It’s been a long time coming and what a way to do it,” Johnson said after the race. “To do it from 11th and racing with the King, Tremont. Man, what a race in that lapped traffic. It had to be entertaining.”

Timothy Davis started from the pole and ran well early on. Brian Berger, who was celebrating his 50th birthday, quickly moved up to second and began to pressure Davis for the point.

On lap 4, a crash broke out in turn 4 involving Mark Flach Jr., Kyle Sheldon, J.R. Heffner and L.J. Lombardo to bring out the race’s only caution. Mark Flach Jr. and Lombardo were done for the night, while Heffner and Sheldon were able to continue.

Berger was able to make short work of Davis on the restart and quickly began to pull away from the rest of the field. Further back, Kenny Tremont Jr. made a steady progression forward from eighth to third. Eddie Marshall started 16th and got to fifth by lap 10.

Johnson started 11th and more or less followed Tremont up the order. When Tremont took second from Bobby Hackel, IV on lap 14, he immediately followed past. Berger pulled out to a good lead, but it shrank as he got into lapped traffic.

Tremont was able to run down Berger in the closing laps, but could never make the run for the lead. On lap 28, Tremont slipped, which allowed Johnson to get past for second. A lap later, Johnson made the move for the win.

Johnson won by a half-second over Berger. Tremont ended up third, followed by Marshall and Keith Flach.

A crash on the frontstretch involving Bryan McGuire, Brian Sandstedt, Kim LaVoy and Joey Coppola brought out the yellow and bunched everyone back up. On the restart, Harper got Herrington back for second but slowed themselves up. That allowed Andy Bachetti to get up to the leaders and sweep all of them to take the lead.

A late caution wiped out a big lead for Bachetti. Ultimately, he had to hold off Herrington to take his second win of the year. Harper was third, then Dwyer and Coppola.

The Sportsman class made up their feature from May 8 Saturday night. Here, Coppola started from the pole and led early. Meanwhile, contact between Kevin Ward and Chris Lynch caused a chain reaction crash that brought out the early yellow.

Early in the race, Rob Maxon was Coppola’s primary challenger at the front. However, John Virgilio was quickly moving up the order. Having started 13th, Virgilio avoided the chain reaction and got into the top five by halfway.

A caution due to Whitey Slavin hitting the wall put everyone back together. Following a wave-off, Virgilio was able to get past Maxon for second and set off to get Coppola.

Here, Coppola’s nerves showed. He anchored himself to the inside line instead of searching around for grip. Virgilio took advantage of the additional grip available towards the outside and ran down Coppola on the final lap.

Coming to the checkered flag, Virgilio was able to get to the outside of Coppola and just beat him to the line by .017 of a second to take his second win of the year. Coppola was forced to settle for second, while Maxon was third. Walter Hammond Jr. was fourth, while Jeff Watson was fifth.

The Pro Stock feature saw Nick Hilt start from the pole and get in front of Shawn Perez to establish a small lead. As the race continued to run, Scott Towslee moved up into contention. He was able to get past Perez on lap 6 for second and tried to run down Hilt.

Further back, Jason Meltz was running well, slowly but surely moving up from the seventh starting spot. With five laps to go, Meltz got to Towslee and was able to slip past for second.

Towslee wanted to get the spot back, but ran a little too hard into turns 3 and 4 and spun out. He was then hit by Dave Stickles to bring out the yellow.

On the restart, Johnny Rivers and Zach Seyerlein locked wheels in turn 4 and crashed, bringing out a second yellow to set up a Green-White-Checker. On the GWC, Hilt was able to hold on to take his first win of the year. Meltz was second, followed by Chad Jeseo, Perez and Jay Fitzgerald.

*- J.R. Heffner drove in the Small Block Modified feature in place of Ray Hall Jr. as a substitute driver. He will earn points for Hall.

*- Scott Govertsen drove in the Pro Stock feature in place of Tom Dean as a substitute driver.