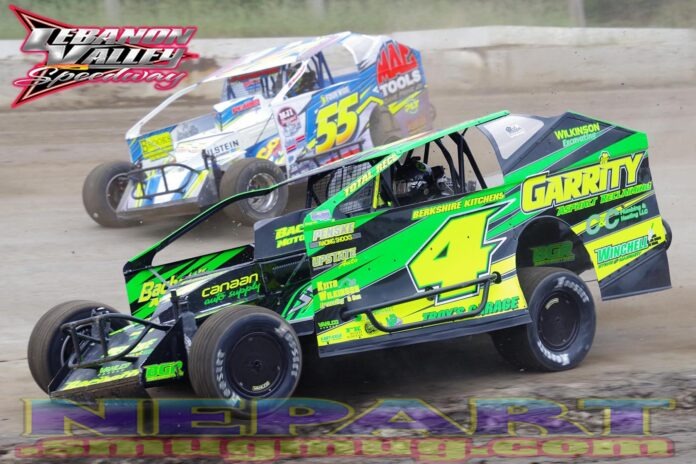 WEST LEBANON, NY – Saturday night was a very busy night as not only were both the Modified and Pro Stock classes running double features, but Lebanon Valley Speedway was also memorializing three greats of the past, Mark Fleury, Peanut Pierce and Russ Blake.

The first Modified feature, a makeup from July 3, proved to be an expensive one. On the first lap, Bobby Hackel, IV smacked the wall in turn 3, which created a chain reaction that involved John Ruchel, Josh Marcus, Paul Gilardi and Chase Dowling. Another incident saw Mike King and Eddie Marshall go into the wall in turn 1.

However, it was the third restart that really caused problems. Dan Humes and Olden Dwyer had contact exiting turn 2, causing Dwyer to spin. The wreck happened near the front of the field and the sun being in the driver’s eyes worked together to create a 13-car crash on the backstretch. That resulted in a long red flag. Thankfully, no one was injured. Tire issues caused two additional cautions later on.

Prior to the big wreck, Kyle Armstrong had snatched the lead from pole-sitter Humes. Once the race finally got a long run under green, Armstrong was able to open up a decent advantage.

However, in the closing laps, L.J. Lombardo ran Armstrong down. The two drivers battled for a few laps before Lombardo took the lead with a lap and a half to go. From there, Lombardo pulled away to take his third win of the year. Armstrong was second, then Kolby Schroder, Kenny Tremont Jr. and Marc Johnson.


The regular feature was the Mark Fleury Memorial, 30 laps in honor of the 19-time race winner. Here, Mike King started from the pole and lead nearly the entire first half of the race. Brian Berger and Eddie Marshall were right on his tail.

On lap 13, Lombardo and Schroder collided in turn 1 and spun to bring out the yellow, closing up the field. On the restart, Berger was able to move past King to take the lead entering turn 3. Meanwhile, Andy Bachetti started in 15th and was quickly making his way up the order. A slip on lap 19 allowed Bachetti to move into third.

The race came down to a three-lap shootout. Bachetti was able to sweep around Marshall for second on the restart, then went to the outside of Berger and took the lead in turn 4. From there, Bachetti held on for his fourth win of the year. Berger was second, then Brett Haas, Marshall and Sheldon.

The feature ultimately came down to a duel between Bachetti and Jason Herrington. Herrington had the faster car, but Bachetti was blocking him from making the move to the inside. Herrington would get right up on his rear end, but could not make the pass as Bachetti took the victory over Herrington, Frank Harper, Ryan Charland and Chris Curtis.

Sportsman teams had the Russ Blake Memorial Saturday night. Here, Karl Barnes started on the pole and led early in his new chassis despite a series of on-track incidents. However, the man on the move was Chris Lynch. Lynch, who started eighth, quickly moved up the order and took the lead on lap 8.

From there, Lynch was able to open up a gap between himself and Kevin Ward that could not be touched as he took his third win of the year. Ward was second, then Walter Hammond Jr., John Virgilio and Walter Hammond Jr.

Pro Stock teams also had double features to contend with. In the first race, Dave Stickles started from pole and had Tom Dean to contend with for much of the race. Further back, Chad Jeseo was slowly moving forward from the ninth starting spot.

Jeseo took second from Dean on lap 13 and slowly but surely, closed in on Stickles. In the final laps, Jeseo got to Stickles, but could not prevent the Valatie, N.Y. racer from taking his first Pro Stock win. Jeseo was second, then Steven LaRochelle, Dean and Nick Hilt Jr.

Feature No. 2 saw Shawn Perez lead from the pole early on with Dean pressuring and LaRochelle right behind. On lap 8, Perez slipped in turn 4. This allowed Dean and LaRochelle to get alongside. Dean was able to lead lap 8 at the line, but LaRochelle was able to get past entering turn 1 to take the lead.

From there, both Jason Meltz and Jeseo attempted to get past LaRochelle, but LaRochelle held on to earn his first win in his new Camaro. Jeseo was second, then Jason Meltz, Dean and Hilt.