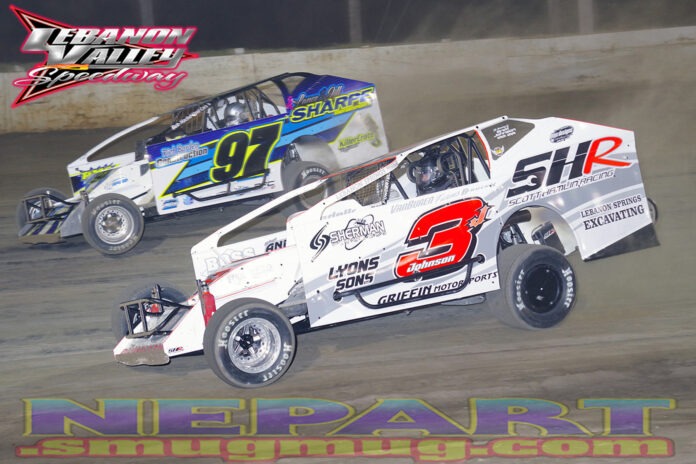 WEST LEBANON, NY – Saturday night saw the annual Rifenburg Construction Night at Lebanon Valley Speedway. $5000 was on the line to the winner.

Josh Marcus started from pole in a feature that took a little time to get going. At the beginning of the second lap, Wayne Jelley spun his Butch Jelley tribute car in turn 2 and was hit by Dan Humes to bring out the yellow. Humes continued with significant right-side damage, while Jelley was done for the night.

On the restart, Bobby Hackel, IV was able to get past Marcus to take the lead. Shortly afterwards, John Ruchel spun exiting turn 4, collecting Humes and Kolby Schroder to bring out another yellow. Schroder was done for the night here.

Marcus’ chances at a good finish ended when he slid into the wall in turn 4 to bring out a yellow on lap 4. He was able to continue and finished a lap down in 14th.

The constant yellows allowed the big names to move up the order. Points leader Andy Bachetti was already up to sixth from 15th. Brett Haas was eighth, while Marc Johnson was second and L.J. Lombardo third.

On the restart from the fourth yellow, Lombardo was able to take second from Johnson. Then, the yellow flew for Timothy Davis doing a 360 in front of much of the field in turn 4. Here, Johnson noticed something.

“On the restarts, Hackel was playing some games, waiting a long time to fire,” Johnson explained afterwards. “He was setting himself up for the guy in third to put him in a bad position if he could drive right to the bottom. As soon as [the officials] told me I was third, I was really happy and more than happy to let Lombardo go up front. It worked out [from there].”

On the restart, he swept past Lombardo to get second back in turn 1. He then immediately snatched the lead from Hackel in turn 3.

Despite the sweeping move to the lead, he did not run away from the pack. Hackel and Lombardo kept pace, while Haas quickly moved up to fourth behind Eddie Marshall. Meanwhile, Bachetti’s charge was stunted.

Lombardo ended up a half-second back in second, followed by Haas. Marshall was fourth, then Bachetti.

The Sportsman class had 31 cars on hand Saturday night and a surprise early on. Dylan Gibson started from pole and ran very well at the front. Harold Robitaille’s car struggled to come up to speed at the start. Since Robitaille drew the fourth starting spot, this caused a stack up. Everyone avoided Robitaille, but Jeff Reis lost control of his car and nosed into the inside wall exiting turn 4 to bring out a yellow.

The stack-up on the inside line allowed a number of drivers, such as points leader John Virgilio, to make runs towards the front. Virgilio started in 13th, but was already up to third by lap 5. Virgilio was far from done there. He made short work of Matt Burke for second, then snatched the lead away from Gibson on lap 9.

A caution for Kevin Ames slowing on the backstretch bunched the pack back up with nine laps to go. When the race restarted, Rob Maxon took advantage to move up from fifth to eventually take second.

Incidents involving Reis, Nikki Ouellette and Peter Lorenzo slowed the pack once again and set up a five-lap shootout. However, nothing was going to prevent Virgilio from taking his third win of the year.

Pro Stock saw Zach Seyerlein start from the pole and outpace the pack early on. Jay Fitzgerald was able to get past Tom Dean for second.

Jason Meltz, who entered the night second in points, had a terrible evening. He had a mechanical failure in his heat race that pitched him into the wall in turn 2. The feature was no better as he dropped out early, finishing 14th.

For the first half of the feature, Seyerlein had to do battle with Fitzgerald. However, Seyerlein was eventually able to open up a comfortable gap over the rest of the pack. From there, Seyerlein was able to hold on to claim the victory in a caution-free feature.

Fitzgerald held on for second, while Chad Jeseo was third. Dean was fourth, while Johnny Rivers was fifth.

In Pure Stock, Janai St. Pierre, Colby Kokosa and Rob Partridge each earned victories. The scariest moment of the night occurred during the third Pure Stock feature when Partridge and Don Kennedy collided exiting turn 4. Kennedy went hard into the wall at the crossover gate. Kennedy was able to exit his car with assistance, but complained of back pain and pain in his knees afterwards. He was transported to the hospital for further treatment.

*- Jim Bemiss raced Saturday night in a substitute role in place of Brian Berger. Berger will earn the points for his finish.

*- Jim Bemiss raced Saturday night in a substitute role in place of Ed Arnold. Arnold will earn the points for his finish.