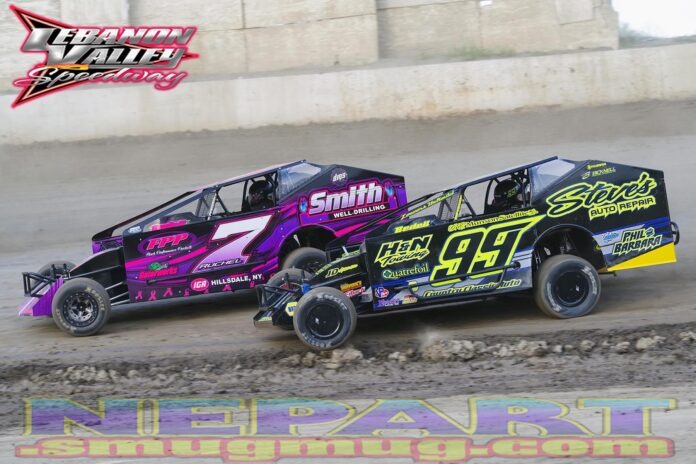 WEST LEBANON, NY – Saturday night at Lebanon Valley Speedway had the threat of rain. As a result, the racing card was a little faster than normal. That suited Kolby Schroder just fine.

John Ruchel won the pole by virtue of a second-place finish in his heat race. His time at the front in the feature only lasted a few seconds as Timothy Davis swept past entering turn 1. Bobby Hackel, IV followed past.

Once in the lead, Davis opened up a comfortable lead over the rest of the field. He wasn’t the cleanest as he jumped the cushion on lap 8 and nearly brushed the wall, but he had serious pace. Further back, the top points runners (Brett Haas, Andy Bachetti and Marc Johnson) were more or less trapped at the lowest reaches of the top 10.

Schroder started in fourth and stalked Hackel for the entire first third of the race. On lap 11, he was able to make the pass on Hackel for second, but couldn’t really make much ground on Davis.

That changed when the race reached the second half. Davis’ car began to fade, while Schroder’s came into its own. That allowed him to quickly run Davis down by lap 19. A battle for a lap and a half brokeout, but Davis could not prevent Schroder from taking the lead. Once out front, Schroder quickly began to pull away.

Schroder was looking good for victory until Mike King stalled on the apron of turn 1 to bring out the race’s only yellow. That bunched the pack up for a six-lap dash to the finish. For Schroder, it took about two laps for his car to come back in after the restart. Once it did, he was gone, running off to his first win since 2017.

Brian Berger passed Davis on the restart and held on for his third second-place finish of the year. Bachetti moved all the way up to third thanks to the yellow, followed by Davis and Hackel.

The Small Block Modified class had some of the biggest names in the class running into trouble. Michael Sabia started from the pole and led early, but the biggest moment here was when Bachetti and Joey Coppola collided on lap 2 and went into the wall in turn 3 to bring out the yellow.

Both Bachetti and Coppola were ok, but their nights were over. Finishes of 17th and 18th for two of the top three in the class will close the points up significantly.

Sabia had to contend with Brian Sandstedt early on for the lead. However, Sandstedt had a mechanical failure at halfway that put him out. Sandstedt’s retirement boosted Olden Dwyer into second. Dwyer was on fire at this point and ran down Sabia in a hurry.

With nine laps to go, Dwyer took the lead away from Sabia and proceeded to run away and hide. No one could do anything to prevent him from taking the victory.

Dwyer’s margin of victory was 5.985 seconds over Sabia. Frank Harper was third, then Chris Curtis and Ryan Charland.

Pro Stock teams raced in the special Ol’ Buzzard 30, a 30-lap feature held in memory of Jimmy Langenback. Unlike the most recent edition of the race, this was a very clean affair.

Shawn Perez started from the pole and was thrust into an immediate battle with fellow front row starter Doug Olds. After a couple of laps of running side-by-side, Olds was able to snatch the advantage. Once there, he began to pull away slowly, but surely.

Further back, Chad Jeseo was moving up from the ninth starting spot. In the first six laps, he moved himself up to fourth. Lap 9 saw Jeseo take third from Johnny Rivers.

Meanwhile, Olds stretched his advantage to three seconds over the pack as Jeseo began to work on Tom Dean for second. All of a sudden, trouble struck Olds’ No. 73. The car suddenly quit, forcing Olds to pull off the track and retire.

That made the battle between Jeseo and Dean the new fight for the lead. Jeseo took the lead right after the start-finish line on lap 15. Once in the lead, Jeseo slowly opened the gap on the field.

Jason Meltz was able to get past Dean on lap 22, but could do nothing to prevent Jeseo from taking his third win of the year. Jason Meltz was second, then Dean, Nick Hilt Jr. and Zach Seyerlein.

After the race, officials wanted to take a closer look at Jeseo’s engine and chose to pull it out for inspection at a third-party facility. As a result, the Ol’ Buzzard 30 results are unofficial.

*- This race was scheduled for 10 laps, but was shortened to six due to attrition.