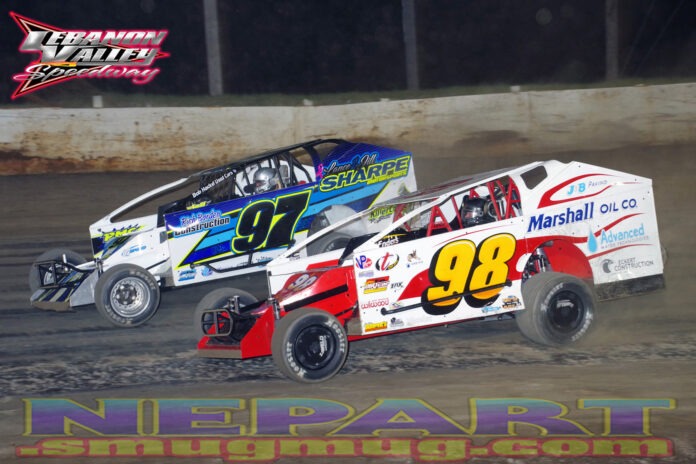 WEST LEBANON, NY – Recently, the Modified class at Lebanon Valley Speedway has seen a series of fan favorite break winless streaks. Saturday night was no exception as Eddie Marshall picked up his first win of the season in his Marshall Oil No. 98.

“At the drop of the green, the car was a little off,” Marshall said after the feature. “I was actually going backwards and laboring. However, the [car] changed as the race went on and got better. I knew when I saw Marc [Johnson] alongside on that restart, I knew I was going to have to work for it.”

Olden Dwyer started from the pole and led early. However, the first half of the feature was run in a start-stop fashion. First, Ryan Darcy shredded his right rear tire on the first lap to bring out a yellow. Darcy tried to get back out after replacing his tire, but retired shortly afterwards.

Chris Curtis ran well in his heat race Saturday, but his race didn’t last long as he slid into the wall on lap 3.

Marshall started in fourth and quickly moved up to third. He stalked Mike King for multiple laps before taking second on lap 9. Dwyer had a healthy advantage at the time.

On lap 12, John Ruchel and Brandon Lane collided exiting turn 4. Ruchel spun and hit the inside wall to bring out the third yellow. Ruchel was ok, but done for the night. The restart saw Bobby Hackel, IV break a jack shaft and stall on course to bring out another yellow.

The next attempt resulted in a big points swing. Andy Bachetti spun in turn 10 and was hit by Brian Berger. Berger was out for the night, but Bachetti was able to get back to the pits for repairs. He would end up finishing 10th. During this caution, Dwyer pulled into the pits with a mechanical failure that ended his night. As a result, Marshall was now in the lead with Marc Johnson hot on his tail.

On the restart, Brett Haas passed King for third. Much of the rest of the race from this point on was a three-man duel between Marshall, Johnson and Haas. Johnson ran Marshall down with six laps to go and tried to make a move to the inside in turn 3. However, he was blocked by a lapped car. From there, Marshall held on to take the win.

Johnson ended up second, closing his margin to Bachetti in the points to only 12. Haas was third, then L.J. Lombardo and Kolby Schroder.

The Small Block Modified feature saw Joey Coppola start from the pole and grab the advantage over Brian Sandstedt. Meanwhile, Frank Harper spun and backed into the wall in turn 2 on the first lap. He was able to continue, but ended up 10th.

Once the green was back out, Coppola was able to pull away from the rest of the field. By halfway, Coppola had more than four seconds over Sandstedt. Meanwhile, a train was building behind Sandstedt’s No. 12.

Michael Sabia took second on lap 15 and had a fast car, but Coppola had too big a lead for him to do much with it. Coppola held on to take his first Small Block victory by 4.375 seconds over Sabia, Bachetti, Sandstedt and Dwyer.

The Sportsman feature saw points leader John Virgilio have a terrible night. He managed to get involved in an incident on a false start at the beginning of the race. After repairs, he resumed, then spun to draw a caution on lap 5. More issues later on relegated him to a 19th-place finish, his worst of the year.

Sabia took the lead away from Dylan Gibson on a restart exiting turn 2 and attempted to pull away from the pack. The scariest incident of the night occurred on lap 12 when a number of cars came together. Kevin Ward ended up rolling his No. 98 multiple times. Ward walked away, but the red flag was displayed for cleanup.

Sabia was able to hold on over the last eight laps to claim the win. Whitey Slavin was second, then Chris Lynch, Peter Carlotto and Tim Hartman Jr.

In Pro Stock, Shawn Perez started from the pole and led early on until Steven LaRochelle overtook him on lap 9. Shortly afterwards, Perez stalled to bring out a yellow.

LaRochelle led until he went up the hill in turn 2 on lap 14. That allowed Nick Hilt Jr. to take the lead. Shortly afterwards, LaRochelle spun and hit the wall in turn 1, ending his night.

From there, Hilt held on to take his third win of the year. Chad Jeseo was second, then Jason Meltz, Zach Seyerlein and Dave Stickles.

*- Johnny Rivers finished ninth on-track in the Pro Stock feature, but was penalized one spot for illegally attempting to pass on the final restart prior to the start-finish line.