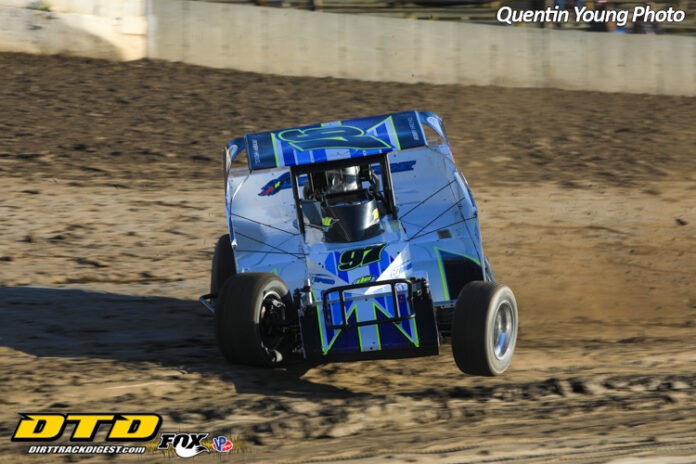 WEST LEBANON, NY – Wet weather that moved in right before warmups resulted in a 90-minute delay and a revised schedule. With heat races (for the most part) removed from the schedule, Bobby Hackel, IV took the lead early and held on for his first career Big Block win at Lebanon Valley.

“[This win] was all thanks to Lance & Jill [Sharpe] and Pete from PMC,” Hackel said afterwards. “Without them, I just wouldn’t be here at Lebanon Valley. I wanted to be back here for years, but I didn’t want to come back until I could do it right.”

Olden Dwyer started the Modified feature from the pole and led early. Hackel started fourth and quickly moved himself up to second in the first few laps of the feature.

Hackel then ran down Dwyer. A battle broke out, but Hackel took the lead on lap 7 exiting turn 4. Once out front, Hackel quickly pulled away from the field.

Further back, Andy Bachetti made some progress in moving up from the ninth starting spot, but it was slow going. He was still ahead of his closest challengers in points, Marc Johnson and Brett Haas, though.

Hackel expanded his lead over Dwyer up to over four seconds before John Ruchel had mechanical issues and stalled on the frontstretch to bring out the race’s sole caution on lap 21. During this yellow, Dwyer retired with mechanical issues, the second week in a row that trouble ended his night in a top five position.

Kyle Sheldon inherited second, but Kyle Armstrong was able to get past on the restart. L.J. Lombardo was able to swoop past both drivers to take second with four laps to go, but no one could keep Hackel from taking the win.

Lombardo was 1.295 seconds back in second at the finish, followed by Armstrong, Bachetti and Haas. With his fourth-place finish, Bachetti merely needs to show up for Mr. Dirt Track U.S.A to claim the Modified championship.

The Small Block Modified feature ended up being a race of attrition. Frank Harper started from the pole and led early. However, trouble was the name of the game. A chain reaction in turn 4 resulted in Sean Mandel spinning to bring out an early. On the restart, Dwyer spun his No. 88JR in turn 1, collecting Jason Herrington, John Lutes Jr. and Brian Sandstedt. Lutes and Sandstedt were out on the spot, while Herrington ended up retiring later on.

The main threat to Harper in this race was Ryan Charland, who took second from Alan Houghtaling on lap 7. However, Charland suffered a tire failure on lap 16, which brought out the final yellow. He would continue, but finished two laps down.

Harper held on over the final third of the race to take the win. Bachetti was second, then Houghtaling, Joey Coppola and Brian Peterson. Only seven cars finished.

The Sportsman feature was quite simply, a wreckfest. Kevin Ames started from the pole and led in his best race of 2021. However, the trouble came quickly. Ryan Heath spun early after contact with Hunter Ordway to bring out the yellow.

A couple of laps after the restart, Robbie Colburn spun in turn 4. His car appeared to dig into the track and entered a barrel roll. Nikki Ouellette, Peter Carlotto, Walter J. Hammond and others were collected. Everyone was ok, but the race was briefly red-flagged.

Following another quick yellow, two separate spins for Ordway and Keith Patnode brought out the fourth yellow. The restart brought a fifth yellow for a crash in turn 2 involving Carlotto, Joey Scarborough and others. After this, track officials instituted single-file restarts.

Through all of this craziness, Tim Hartman Jr. drove up from the 17th starting spot into the top three. On lap 8, he was able to drive past Ames to take the lead. A couple of more yellows resulted in the race being shortened, but Hartman held on to take the win over Rob Maxon, John Virgilio, Whitey Slavin and Walter Hammond Jr.

Pro Stock saw Shawn Perez start from the pole in his No. 09 and run very well at the front. However, the man on the move was Steven LaRochelle. LaRochelle started seventh and quickly moved to the front. It took a mere four laps for LaRochelle to move into second and get to Perez’s bumper.

It did not take long for LaRochelle to take the lead and begin to pull away from the field. It looked like it was going to be an easy win, but shortly after halfway, the exhaust shield fell off of the No. 178, taking part of the exhaust with it.

LaRochelle described this as “horsepower going out the window” after the race. The leaky exhaust cost him power and brought him back to the field. Chad Jeseo took second with five laps to go and nearly got to LaRochelle. However, Jeseo ran out of time as LaRochelle took his third win of the year. Jeseo was second, then Perez, Nick Hilt Jr. and Tom Dean.

*- The Sportsman feature was shortened from 20 laps to 15 due to a series of crashes making the race take more than 45 minutes to complete.