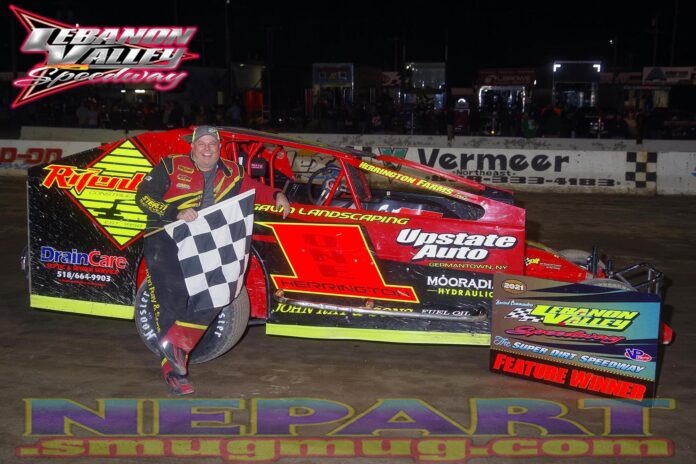 WEST LEBANON, NY – The final night of the season saw most of the championships already decided, but there was still a good amount of competitive action. Jason Herrington showed that you shouldn’t give up for any reason in the Small Block Modified feature.

“I was actually settling for third,” Herrington said afterwards. “I thought ‘We ain’t bad and we haven’t smashed [anything up].’ Then, [Ryan Charland] and [Chris] Curtis got together and I said ‘I might be able to capitalize on this.’ That’s exactly what happened.”

Curtis started from the pole in his No. 35 and led early. For Alan Houghtaling, his 2021 season came to an end on the first lap when he went into the wall in turn 4, then crossed the track in front of traffic. This collected Ray Hall Jr., Kevin Petrucci and Montgomery Tremont. Petrucci was able to continue, while Hall’s car failed right after the restart.

Tremont tried to continue after a couple of laps in the pits, but his car came to a halt on the frontstretch to draw another yellow. He was done for the night from there. Another restart saw Frank Harper get tagged and spin into the inside wall on the frontstretch.

All of these shenanigans played into the hands of Andy Bachetti, who quickly moved up from the 14th starting spot to take third from Jason Herrington on lap 7. Normally, this would mean that Bachetti would thrash Curtis and Ryan Charland, take the lead and run away with it. Not so fast.

Herrington got a second wind and retook third three laps later. From there, he was actually able to pull away from Bachetti and attempted to run down Curtis and Charland by himself.

In the closing laps, Charland began pressuring Curtis for the lead. The two drivers ran side-by-side for a couple of laps, which allowed Herrington to catch up. A failed move for the lead by Charland led to Herrington taking second on lap 22. With a little more than a lap to go, Herrington made the pass for the lead and held on to win.

Curtis crossed the line in second, but was later disqualified for the team’s hauler pulling out of the infield during the Sportsman feature. As a result, Charland is credited with second, then Bachetti, Kim LaVoy and Joey Coppola.

35 cars started the Sportsman feature, resulting in a stop-and-go feature. The trouble started early as Bob Fachini spun in turn 1, triggering a stackup that wrapped up Keith Johannessen, Joey Scarborough, Harold Robitaille and others.

Another crash broke out a lap after the restart involving Jeff Reis, Walter Hammond Jr., Karl Barnes and others exiting turn 4. The track was briefly blocked here.

On the restart, Matt Burke took the lead away from pole sitter Peter Lorenzo. Michael Sabia, who had moved up from the 10th starting spot to third on the first couple of starts, followed into second. It was only a couple more laps before Sabia took the lead for himself.

The trouble kept on coming from there. First, Jared Powell spun to bring out a yellow. Then, Jeff Gallup was run over from back, triggering another stackup. Another crash in turn 2 involving Keith Patnode, Kevin Ames and Dave Fachini resulted in single-file restarts being declared for the remainder of the race.

2021 Sportsman champion John Virgilio moved up to second on lap 7 and tried to do battle in between yellows, but even he didn’t seem to have much for Sabia. The race ultimately came down to a one-lap shootout after a spin for Jimmy VanZandt, but no one could keep Sabia from taking his second win of the year. Walter J. Hammond was second, then Sabia, Whitey Slavin and Rob Maxon.

Dave Stickles started from the pole and ran very well from the start. Zach Seyerlein started fifth and immediately rose to the occasion, moving up to second.

Seyerlein and Stickles battled for the lead for much of the race, but Stickles was able to hold him off. With four laps to go, Seyerlein was finally able to make a move for the lead stick. Shortly afterwards, Dominique Hilt spun in turn 4 to bring out the race’s sole caution.

Seyerlein was able to hold back the pack during the final three laps to take the win. Stickles was second, followed by Nick Hilt Jr., Zach Sorrentino and Brian Keough.