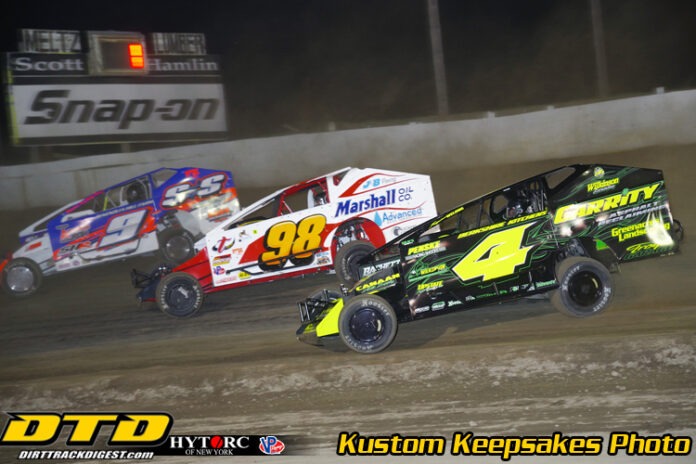 WEST LEBANON, NY – Saturday night saw a chilly night at Lebanon Valley marked by a slick track surface and a biting wind. Despite that, Marc Johnson was able to deal with the conditions to take his first win for Kevin Starchek.

“[The car] was really good tonight,” Johnson said after the race. “We started off the night struggling with our spring package. We ended up taking some loads out of it [for the conditions] and ended up making out pretty good.”

Kyle Sheldon was hot on Gilardi’s heels and fought for second while Johnson was driving away. After multiple laps running side-by-side, Sheldon took second-place away on lap 9.

Johnson was able to push his lead over five seconds before the race’s only yellow flew on lap 16 when Brian Berger slowed to a stop on the frontstretch after losing oil pressure.

That bunched the field back up. On the restart, Haas was able to get back past Bachetti and began a charge towards the front. Meanwhile, Bobby Hackel, IV was able to get by Gilardi for third.

However, no one could do anything with Johnson. Johnson was able to pull away once again and was not challenged en route to victory.

Johnson’s margin of victory was nearly six seconds over Sheldon. Hackel was third, then Haas and Keith Flach.

The Small Block Modified class held their season opener Saturday night and it was essentially a two-man race. L.J. Lombardo struggled in the Modified featuring, finishing 11th. Changes were made to his Small Block car to compensate.

By virtue of winning his heat race, Lombardo had the pole with Jason Herrington alongside. When the green came out, the two drivers ran off and hid from the rest of the field.

Herrington was always close to Lombardo’s bumper bar, while Joey Coppola was third. The rest of the field dropped away quickly. The lead duo approached the rear of the field to commence lapping before halfway. By lap 18, there were only nine cars on the lead lap.

Harrington was closing in on Lombardo in the final laps when he had to lap Kim LaVoy and Brian Sandstedt. At the same time, Bill August slapped the wall in turn 4 and slowed to a stop on the frontstretch to bring out the race’s only caution.

This set up a one-lap shootout for the win. Lombardo was able to get a good start and opened a small gap to take the win. Herrington was second, then Ryan Larkin, Andy Bachetti and Lorne Browe.

In Sportsman, Keith Johannessen started on the pole and led early on. The field was stacked up a little when Peter Lorenzo hit the wall in turn 2 on the first lap, but no yellow was thrown.

Three-time and defending Sportsman champion John Virgilio started third and immediately dispatched of Ryan Heath for second. He then began to pressure Johannessen for the lead. Johannessen was able to hold back Virgilio’s charge for a few laps, but Virgilio snatched the lead on lap 6.

Behind Virgilio, Tim Hartman Jr. quickly progressed forward and was up to third by the time Virgilio took the lead. A couple of laps later, Hartman scored second and set off in search of Virgilio.

Virgilio had a lead of over three seconds with five laps to go before Hartman began to reel him in. However, Hartman would run out of time as Virgilio took his first win of the year.

Hartman ended up second, then Whitey Slavin, Johannessen and Chris Lynch. In the first Limited Sportsman race, Jacob Perry took the lead from Dylan Grogan on lap 5 and held on for the victory.

The Pro Stock race saw Chris Stalker start on pole, but he ran into trouble on the first lap. Stalker’s No. 177 appeared to lose power in turn 2 in front of the field. In the process of moving down the track, he was hit by Zach Sorrentino to bring out the yellow. Stalker was done for the night, while Sorrentino continued following repairs.

Shawn Perez took the lead in the wake of Stalker’s issues, but he quickly ended up in a battle with Chad Jeseo. Jeseo was able to get the lead on lap 3 and was able to drive away to score the victory.

Zach Seyerlein made a late pass on Steven LaRochelle to finish second. Sorrentino was fourth, while Perez was fifth.