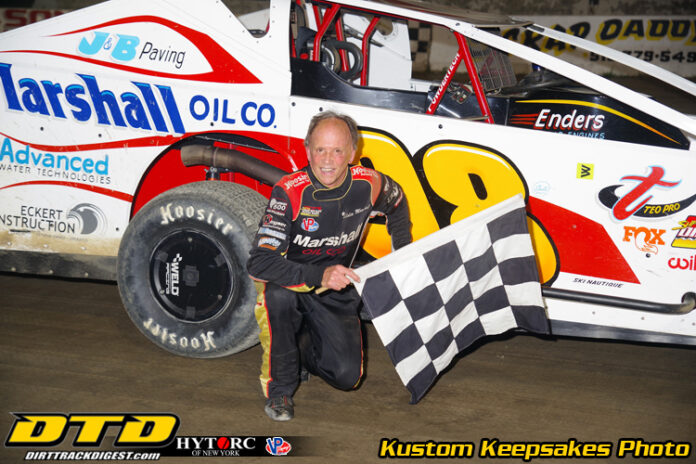 WEST LEBANON, NY – Eddie Marshall was forced to miss the race on May 8th after testing positive for COVID-19. After suffering from mild symptoms of the virus, Marshall recovered enough to make a return to the track Saturday night. He was able to take the lead on the first lap and lead all 30 to take the Modified victory. However, just getting to the start was an accomplishment.

“The transmission was leaking bad [during hot laps],” Marshall said afterwards. “We had to change it, but our spare was not really compatible with what we run now. The guys worked really hard and I didn’t think it was going to happen. People from other crews jumped in and we were quite fortunate to get out on the track.”

Wayne Jelley started the feature from the pole, but washed up the track in turn 2. This allowed Marshall to sweep by into the lead with Brian Berger in tow.

Once out front, the two drivers began to pull away from the pack. Marshall put a second and change on Berger at first, but Berger was able to keep pace. Then, trouble struck. The brakes began to go on Berger’s car, costing him nearly a second a lap.

By lap 10, Berger was forced to pull in with a complete loss of braking ability. That moved Kyle Sheldon up to second, five seconds behind. Further back, Kolby Schroder was third and Kenny Tremont Jr. fourth.

Schroder was able to match Marshall’s pace as they began to encounter lapped traffic, but he could not make any significant inroads on the Richfield, Conn. Native. With eight laps to go, Sheldon’s No. 42 slowed on the frontstretch with his own mechanical issues.

From here, Marshall was able to hold steady to take his first win of the year. Schroder was 4.797 seconds back in second, followed by Tremont. Andy Bachetti was fourth, while L.J. Lombardo was fifth.

In the Small Block Modifieds, Alan Houghtaling started from the pole and led early. Joey Coppola qualified eighth, but ran into trouble early as he hit the wall in turn 4 on the first lap. His car then slowed on the backstretch to bring out a yellow.

A spin for Ryan Larkin brought out a caution on lap 5, setting up a series of false restarts. After Houghtaling failed to restart in the delineated restart box twice, he copped a one row penalty as a result.

Peter Carlotto claimed the lead as a result over Kevin Petrucci in one of Petrucci’s finest runs. However, Carlotto’s time at the front was short-lived as a driveline issue ended his night.

Petrucci ended up in the lead with Jason Herrington in tow. The “Flyin’ Farmer” did his best to stick it to Petrucci, but Petrucci held him off. Lorne Browe was in third until he crashed on lap 15 to bring out a yellow.

On the restart, Andy Bachetti was able to sweep past Herrington for second. A lap and change later, he was in the lead. From there, Bachetti pulled away for the win. Petrucci finished a career-best second, then Herrington, L.J. Lombardo and a recovered Coppola.

The Sportsman teams competed in the 10th Annual Andrew Sherman Memorial. $2000 was on the line for the winner. By virtue of winning his heat race, Jeff Watson started from the pole. Unfortunately, this race took a little bit of time to get going.

First, Alan Houghtaling hit the wall on the frontstretch to bring the yellow out at the end of the first lap. Shortly after the restart, Dave Baranowski Jr. crashed out in turn 2.

The real problems came on the restart. Watson was trying to slowly bring the field to green, but there was a fair amount of impatience. A collision took place that caught up a number of drivers. Only Kevin Ward, who was third prior to the incident, was eliminated, but a number of cars were damaged.

Tim Hartman Jr. was the beneficiary of the chain reaction and took the lead with John Virgilio right behind. The remainder of the race ended up being a battle between Hartman and the three-time and defending champion. Virgilio could make inroads at times, but Hartman held on to take the $2000 home to Niskayuna.

The Pro Stock class saw Chris Stalker start on the pole, but sputter in turn 2 on the first lap. This allowed Shawn Perez to get past to take the lead.

Zach Seyerlein ran down Perez and took over on lap 6. After Perez stopped on track to bring out a caution, contact between Seyerlein and Steven LaRochelle resulted in a flat tire for Seyerlein.

Ultimately, Chad Jeseo took the lead with five laps to go and held on for the win. LaRochelle was second, then Johnny Rivers, Zach Sorrentino and Nick Hilt Jr. In Street Stock, Dave Streibel Jr. took the victory.

*- Shane Powell drove in Frank Harper’s place as a substitute driver. Harper earns the points that Powell accumulated from his 17th-place finish.