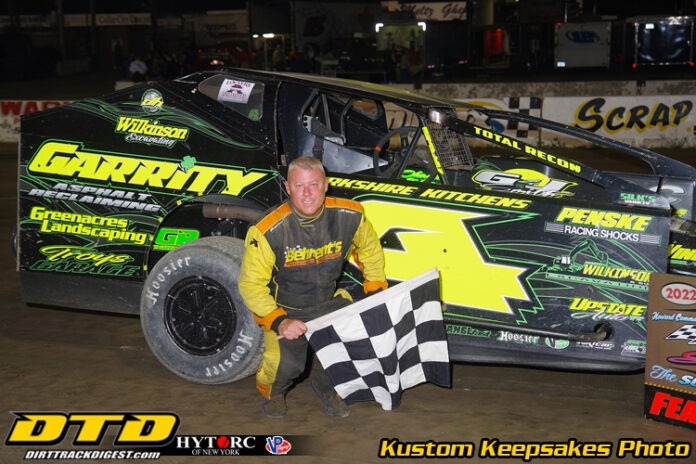 WEST LEBANON, NY –On a hot night at Lebanon Valley Speedway, Andy Bachetti came from 15th on the grid and swept past Brian Berger with 11 laps to go to win his third Modified feature of the year. He now has 101 open-wheel victories at Lebanon Valley, the third driver all-time to reach the century mark.

“To come here and run with the elite group that’s in that realm [Kenny Tremont Jr. and Brett Hearn], it’s an awesome feat,” Bachetti said afterwards. “I’m so happy for my sponsors and everybody who has gotten me to this point from the start. Couldn’t have done it without them.”

Brandon Lane started on pole on his No. 33 with Berger alongside. On the first lap, Brian Berger was able to slip past exiting turn 2 to take the lead. Berger had a strong car and was able to open up a small advantage before Josh Marcus cut his right rear tire to bring out a yellow. Marcus was able to continue, but cut another tire a little later and retired.

A second caution flew shortly after the restart after Kyle Sheldon and Timothy Davis came together in turn 2. By this time, Bachetti had already moved up from 15th to seventh.

As the race continued on, Bachetti slowly but surely continued to move forward. By lap 10, Bachetti was fifth. He was fourth by halfway.

Berger had a healthy advantage over Kyle Armstrong before a caution came out for fluid on-track on lap 17. Another yellow for Paul Gilardi set up the big restart with 11 to go. Bachetti restarted third, then swept around both Berger and Armstrong on the outside for the lead. Once there, he pulled away to take the win.

Berger was 4.274 seconds back in second, then Armstrong. Brett Haas was fourth, while Eddie Marshall was fifth.

In the Small Block Modifieds, a crash between Dylan Gibson and Ryan Larkin brought out an early caution. After the restart, pole sitter Alan Houghtaling settled into a groove at the front of the field with Kim LaVoy giving chase.

Andy Bachetti started 12th and made a quick move forward with L.J. Lombardo following him up through the field. By lap 11, Bachetti was up to third. A couple of laps later, he was second and gaining on Houghtaling by up to a half a second a lap.

The pass came with a little less than three laps to go for the lead. Shortly afterwards, Jason Herrington crashed in turn 1 after contact from Larkin to bring out a yellow. On the final restart, Bachetti ran away to take the Modified-Small Block Modified sweep. Lombardo was second, then Houghtaling, Peter Carlotto and Ryan Charland.

The Sportsman feature saw Shane Powell and Keith Johannessen start on the front row, then collide in turn 2 on the first lap. This resulted in a crash that collected Kevin Ward and Tim Hartman Jr. Ward was eliminated on the spot, while everyone else was able to continue.

Robbie Knipe grabbed the lead as a result of the incident with Peter Lorenzo giving chase. Whitey Slavin was also moving forward from his eighth starting spot. Slavin was able to get past Lorenzo was second quickly, then went to work on Knipe.

A late yellow after Lorenzo’s car stalled resulted in a four-lap shootout. Slavin was able to hold on to take his second win of the year. John Virgilio was second, then Jeff Gallup, Knipe and Hartman.

In Limited Sportsman, Brady Cordova took the lead away from Frank Twing Jr. on lap 2 and drove away to win his second straight feature. Cordova was 5.776 seconds ahead of Phil Arnold at the finish. Karl Barnes was third, then Twing and Kevin Ames.

Pro Stock teams raced 25 laps in honor of the late Robert “Fluff” Hagen, a friendly presence in the pits over the years. Hagen would have liked this race at the front. Steven LaRochelle took the lead from pole sitter Johnny Rivers on the first lap with Chad Jeseo in tow. The next eight laps saw the two drivers run side-by-side for the lead. Very little contact was made, if any.

Following a spin for Chris Stalker on lap 10, things got more physical. The Team Repo teammates Rivers and Shawn Perez collided and spun in turn 4 to bring out another yellow on turn 12. A lap after the restart, Jason Casey was spun out in turn 4, causing a multi-car crash that resulted in a red flag.

The remaining 12 laps saw the LaRochelle-Jeseo duel continue. Jeseo did all he could, but he simply could not get past as LaRochelle led all 25 laps to take home a total of $4100. Jeseo was second, then Nick Hilt Jr., Perez and Jay Casey.

In Street Stock competition, Gary O’Brien sponsored the 15-lap feature himself as a way to help celebrate the birthdays of his twin daughters. As a result, the race was referenced as the O’Brien Twins Feature.

The race itself turned out to be a bit of family affair as Evan Denue started from the pole and led his brother Dom through much of the feature. Behind the Denues, Jeff Meltz Sr. was the only driver that was able to challenge the leaders early.

The race was all but clean until Scott Morris slowed on lap 11 with a mechanical issue on the frontstretch. Morris ultimately lost a wheel in turn 1, which brought out the yellow on lap 12.

With only three laps to go, everyone went as hard as they could. Chaos resulted from it.

Shortly after the restart, Shawn Perez Jr. and Dave Streibel Jr. collided in turn 4 and spun to bring out another yellow.

With two laps to go, Evan Denue went wide in turn 2 and appeared to lose the lead to Chris Stalker. However, another crash broke out exiting the turn that saw Streibel get into the wall hard, then roll his Buick over. Dom Denue was also collected and saw his night come to an end. The red flag was flown. Since a lap was not completed, Evan Denue got the lead back.

Finally, another crash broke out in turn 4 involving Perez Jr., Meltz, Jim Dellea and Brian Walsh to bring out the fourth yellow.

This set up a one-lap shootout. Evan Denue was able to get the jump on Stalker and held on for the win. Katarina Foster finished a career-best third, then Ryan Brown and Dellea.

*- Dylan Gibson drove in substitution for Olden Dwyer, who is out after testing positive for COVID-19. The points earned by Gibson will go to Dwyer.

*- Brett Haas drove in substitution for Olden Dwyer, who is out after testing positive for COVID-19. The points earned by Haas will go to Dwyer.

*- Steve Burbank drove in substitution for Gary O’Brien, who was out in order to celebrate his twin daughters’ birthday, hence the name of the race. The points earned by Burbank will go to O’Brien.