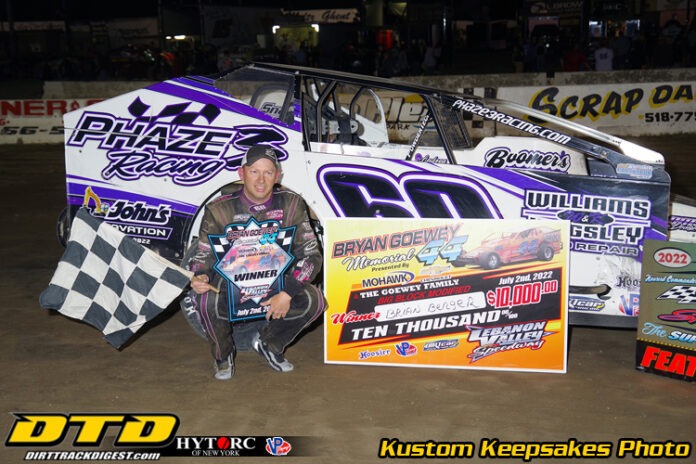 WEST LEBANON, NY – Brian Berger was able to get past John Virgilio on lap 7 Saturday night. From there, Berger was able to hold on to win the inaugural Bryan Goewey Memorial and the $10,000 winner’s share in an attrition-filled feature.

“The car was tremendous. It was the best it’s been all year on a tough track,” Berger said afterwards. “I’m just lucky to have missed the wreck on the first lap. I saw it and dove to the bottom. Sad that a lot of race cars were torn up.”

By way of the redraw, Ryan Darcy earned the pole position for a feature that had a hard time getting started. On the original start, Kyle Sheldon spun in turn 2 and collected Timothy Davis. Davis looked like he was done, but he would ultimately finish 11th.

It was on the restart where heck broke loose. Darcy and L.J. Lombardo had contact exiting turn 2. Darcy hit the wall and broke the right front suspension. The car bounced around and eventually rolled over in front of the whole field. He was hit first by Brett Haas, then pirouetted on his roof, creating a multi-car pileup that also sent Kolby Schroder end over end in one of the biggest Modified crashes in recent years at Lebanon Valley. Luckily, all the drivers involved were ok, but the field was depleted.

Lombardo was judged to be responsible for the crash and was penalized by track officials. As a result, John Virgilio, making his debut in the J.R. Heffner No. 74, ended up in the lead with Berger second.

When Berger took the lead on lap 7, Keith Flach followed him past into second, setting up a similar scenario to Berger’s most recent win. However, Marc Johnson snatched second away on a restart on lap 13.

Points leader Andy Bachetti wasn’t damaged too seriously in the pile-up, but could have had his night ruined by a cut tire with 16 laps to go. He was able to get it changed and continue. He would finish sixth.

The race would come down to Berger and Johnson. Johnson would get close enough to make a move for the lead with less than 10 laps to go, but Berger able to hold him off for the win. Berger ended up .577 seconds ahead of Johnson. Flach was third, then Lombardo and Eddie Marshall. Only 11 of the 26 starters finished.

Sportsman teams were racing in honor of George Marcus, a multiple time champion in the Sportsman ranks back in the late 1980s and 1990s. On the initial start, a collision in turn 2 involving Ray Hall Jr., Karl Barnes, Butchie Irwin, Kevin Ames and Chris Lynch brought out a yellow. Everyone was able to continue, although Slavin had some left rear damage.

Shortly afterwards, Bob Fachini was forced to retire after hitting the wall in turn 2. Kevin Ames and Jeff Reis also had issues to bring out another yellow.

Keith Johannessen started on the pole and ran well in his No. 4ny. Further back, Slavin recovered from his brush on the first lap to snatch second from Kevin Ward on lap 3. From there, Slavin ran down Johannessen and the two drivers had a substantial battle for the lead.

On lap 8, the two drivers made contact in turn 3. Slavin ended up with the lead, while Johannessen slid up the track and dropped all the way back to fifth. It is a move that Slavin noted after the race that he was not proud of.

From there, Slavin was able to pull away from the pack to earn his third win of the year. He ended up 3.898 seconds ahead of Ward at the finish. Tim Hartman Jr. was third, then Lynch and Johannessen. Karl Barnes finished 15th and won the Limited Sportsman Class.

On lap 5, Bruno Richard spun out in turn 2 and collected Tom Dean to bring out a yellow. On the restart, Nick Hilt Jr. was able to get past to take the lead. Points leader Chad Jeseo started seventh and slowly made his way forward.

Jeseo got to Hilt around halfway and a fierce battle emerged. The two ran side-by-side for four laps before Jeseo was able to clear Hilt. From there, Jeseo held on to take his fifth win in a row and seventh of the year. Hilt was second, then Steven LaRochelle, Richard and Sorrentino.