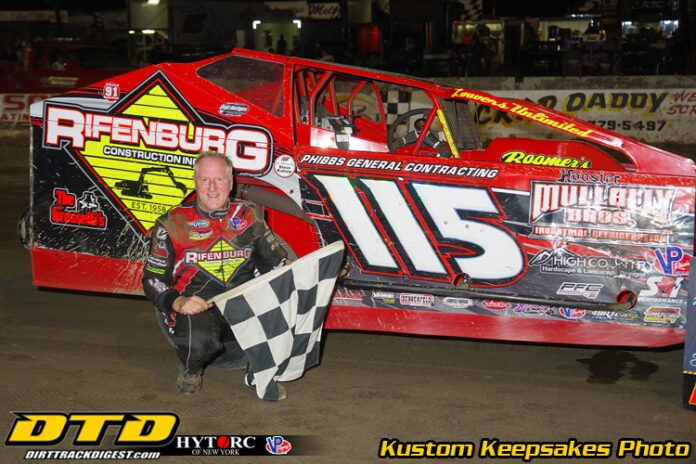 WEST LEBANON, NY – Kenny Tremont Jr. was able to take the lead away from Mike King on lap 10 Saturday night. He was then able to hold off a late charge from Andy Bachetti to take his first Modified win of the year and extend his record number of Big Block wins at Lebanon Valley to 141. It was not easy, though.

“[The car] felt lousy in the heats [and] lousy in [hot laps],” Tremont said after the race. “We kind of made a Hail Mary adjustment and it seemed to help. I wouldn’t say that it was perfect, but it was much better than we had.”

Brandon Lane started from the pole, but almost immediately lost the lead to King. Lane would ultimately not factor in the feature, where he would eventually finish a lap down in 13th.

A caution came out on lap 4 when Kenny Aanonsen Jr. spun and hit the wall in turn 3. He was able to get himself back going, but discovered something broken on his No. 42a. He pulled into the pits, but did not return.

Tremont started in fourth and was able to get past Kyle Armstrong for second on lap 6. He then challenged King for the lead. The two opened up a small gap on the rest of the pack.

Eventually, Tremont made the pass for the lead and began to pull away from everyone else. Meanwhile, Andy Bachetti was slowly making his way forward. He had started in 10th and took third on lap 12. Two laps later, he was in second, but nearly four seconds back of Tremont. From there, he methodically cut into Tremont’s lead, but it wasn’t going to be enough.

A caution with six laps to go for L.J. Lombardo closed the pack back up and gave Bachetti a chance to nail Tremont on the restart. Bachetti did attempt his move to the inside, but Tremont was able to stave off the challenge. From there, he held on for the win.

Bachetti was second and extended his points lead. Kyle Sheldon was third, then Brett Haas and King.

In the Small Block Modifieds, it was quite simply Alan Houghtaling’s night. He earned the pole for the feature after winning his heat. Once the green flag dropped, he was able to run away quickly. By lap 9, he was 3.84 seconds ahead of Ryan Charland.

Further back, Bachetti was once again the class of the field. However, he finished sixth in his heat race and was buried in 13th at the start. He slowly made his way forward through the field, getting to fifth by lap 14.

By that point, Houghtaling’s lead was 5.81 seconds. Given the lack of mirrors in the cars, drivers cannot perceive this, but Houghtaling was under no pressure.

Houghtaling kept up the pressure until he caught the rear of the field in the closing laps. He then backed off, but still took the win by 3.653 seconds. Bachetti passed Charland with a lap and change to go to finish second. Lorne Browe was fourth, while Kevin Petrucci was fifth.

The Sportsman feature saw Bob Fachini start from the pole, but Peter Lorenzo quickly got himself to the point on lap 3 with Keith Johannessen following. Problem is, Ryan Heath had an issue at the start and Johannessen switched lanes prior to the start-finish line. This is a no-no.

When Jim VanZandt crashed in turn 4 to bring out the yellow, Johannessen was assessed a penalty for the start violation that dropped him to fifth. VanZandt was done for the night.

The drivers on the move early in the race were the top in the points, Tim Hartman Jr. and Whitey Slavin. The Johannessen penalty had put Slavin into second, but Hartman took that away on lap 6. A lap later, he was able to get past Lorenzo for the lead.

Hartman and Slavin ultimately pulled away from the field to settle things between themselves. However, the two cars were more or less equal. Hartman having a slight head start on Slavin was all he needed in order to take his third win of the year.

The Pro Stock class saw Rick Duzlak start from pole in his No. 29 with Dave Stickles alongside. Duzlak was able to open a small gap on Stickles early on before he settled into a rhythm.

Further back, points leader Chad Jeseo started 11th and made his way forward. He was up to third when the race’s only yellow flew when Zach Seyerlein cut his right front tire. Seyerlein would take on a new tire and finish ninth.

On the restart, Jeseo was able to take second from Stickles and take the battle directly to Duzlak. The two drivers raced side-by-side for a couple laps before Jeseo cleared Duzlak on lap 16.

Normally, that’s curtains. Not on Saturday night as Duzlak battled back on the outside. The two battled side-by-side all the way to the finish. Duzlak was just barely able to hold off Jeseo for his first win of the year.

The margin was a mere .012 seconds between the two. Stickles was third, then Tom Dean and Nick Hilt Jr. Dave Streibel Jr. won the Street Stock Feature.