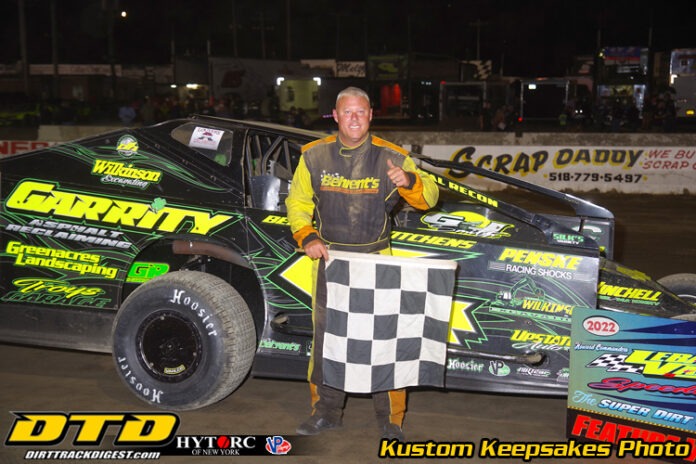 “[Getting the double’s] pretty hard to do here at Lebanon Valley,” Bachetti said after the races. “I’ve got great race cars, great sponsors and great people around me. It’s a testament of digging hard and working hard with everything that these guys do.”

Timothy Davis started from the pole and fended up fierce runs early on from Keith Flach. Behind him, Brett Haas moved up to third on the start and began to pressure Flach after he fell off of Davis’ rear end.

Haas took the second spot on lap 7 and set off to do battle with Davis. Meanwhile, Bachetti started seventh and slowly moved up the order.

Bachetti moved up to third after a fierce battle between Flach and Dwyer ended with Flach nearly hitting the wall in turn 4.

Haas eventually caught Davis and battled hard for the lead. Brett intended to use the inside line, but slower traffic blocked him from doing so. This allowed Bachetti to enter into the fray. He took second spot from Haas, then stalked Davis.

On lap 24, he was able to make the pass stick in turn 2. From there, Bachetti pulled away to take his fourth win of the year. Haas was second, then Davis, Dwyer and Eddie Marshall.

In Small Block Modified competition, Olden Dwyer started from the pole after winning his heat race, then quickly tried to open a gap over Peter Carlotto. Further back, Bachetti lined up 13th on the grid and had to methodically move his way forward.

Dwyer had a lead of 1.5 seconds before Carlotto was able to reel him in a little bit at a time. Meanwhile, Bachetti had gotten himself up to fifth by lap 9. By halfway, he was third, but quite a way behind the leaders despite a faster car.

Last week’s winner Brian Sandstedt slowing on the frontstretch with a steering issue. This brought out the race’s only yellow.

The restart determined the outcome of the race. Bachetti restarted third, then blasted around the outside of both Dwyer and Carlotto to take the lead. Behind the leaders, Alan Houghtaling had a mechanical failure, which stacked the field up. This allowed Bachetti to truly stretch his legs.

Bachetti proceeded to run away from the pack to take the win. Bachetti was 5.328 seconds ahead of L.J. Lombardo at the finish. Dwyer was third, then Ryan Larkin and Jason Herrington.

Sportsman drivers competed in the Inaugural Rod Fifield Memorial, a 25-lap feature that was postponed from last month. Keith Johannessen started from the pole and ran very well early. Robbie Knipe gave chase, while Whitey Slavin moved up to third.

A spin for Ryan Heath in turn 1 brought out the race’s first yellow with eight laps complete, closing everyone up. On the restart, Slavin was able to get by Knipe for second. A lap later, he was able to get past Johannessen and take the lead just before a spin for Bob Fachini brought out another yellow.

Shortly after the restart, Chris Lynch got up to second and started to pressure Slavin. However, that pressure was short-lived as the Connecticut racer began to drop off of Slavin’s car.

A crash for Alex Palmer-Sawyer in turn 4 brought out the final yellow with nine laps to go. That brought Tim Hartman Jr. into the hunt. Hartman was able to get past Lynch on lap 18 for second, then set out to get Slavin. However, Slavin was able to shake off the pressure and pull away to take his fourth win of the year.

Slavin won by 2.591 seconds over Hartman and Lynch. Butchie Irwin was fourth, while Peter Lorenzo was fifth.

In Pro Stock, Tom Dean started from the pole and opened up a small gap over Chris Stalker. Further back, Steven LaRochelle and Chad Jeseo were progressing up the order.

LaRochelle was able to get up to second on lap 9. Shortly afterwards, Zach Seyerlein spun in turn 2 after a tap from Stalker to bring out the race’s only yellow.

Dean finished second after spending most of the second half of the feature fighting off Jeseo. Nick Hilt Jr. was fourth, while Stalker was fifth.

In Street Stock competition, Chris Stalker took his fourth win of the year. He also won the Street Stock Dash.

*- Scott Towslee drove in place of Zach Sorrentino as a substitute driver. Sorrentino will collect the points that Towslee earned for finishing 10th.

*- Janai St. Pierre drove in place of Dom Denue as a substitute driver. Dom Denue will collect the points that St. Pierre earned for finishing 15th.