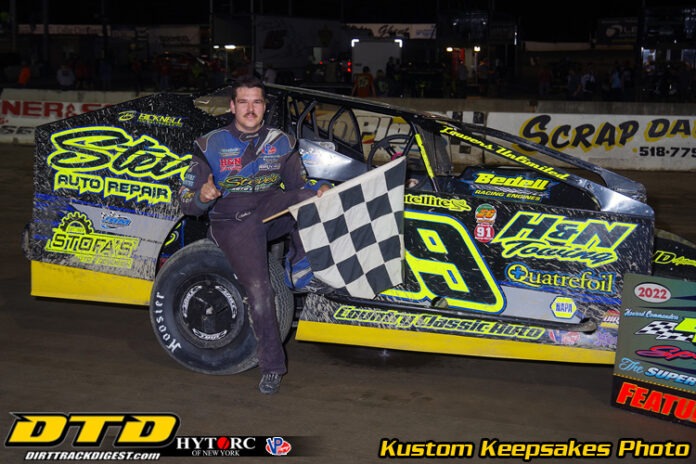 WEST LEBANON, NY – After missing the last two Modified features due to a combination of COVID-19 and a family emergency, Kolby Schroder recovered to lead flag-to-flag to win his first Modified feature of the year Saturday night.

“[The car] was really good tonight,” Schroder said after the race.  “It really helps to start on the front row, but there were so many restarts that the fast guys were able to come up and get right on you.  I think we proved that we had a really fast race car.”

By virtue of winning his heat race, Schroder claimed the pole position.  Once the green flag flew, he immediately opened up a sizable lead.  L.J. Lombardo was able to move up to second quickly.

Further back, Brett Haas was on a mission.  He entered the night 24 points behind Andy Bachetti and needed to make some hay.  He quickly moved up to sixth in the first five laps and continued his forward progress.  Bachetti struggled early on and didn’t make much progress.

Keith Flach was running fourth when he blew his right rear tire on lap 11 to bring out the first yellow.  He was unable to get his car restarted after stopping, which resulted in a tow.  Ultimately, he was unable to continue.

Shortly after the restart, John Virgilio smacked the wall in turn 3 to bring out another yellow.  Here, Bachetti pitted from outside the top 10 for a new left rear tire.  That proved to be what the doctor ordered.

Haas had moved up to second right before the yellow.  Here, he started putting the pressure on Schroder for the lead.  He tried to get to Schroder’s inside, but couldn’t quite do so.  After a couple of laps, Schroder was able to open a gap.

Brian Berger stalling on track with a gear failure with 12 laps to go gave Haas another chance.  Knowing that, Haas was a little quick on the trigger.  On the second attempt, Haas tried again to get to Schroder’s inside.  He was able to run side-by-side for a time, but Schroder was able to stave him off.

Behind them, Bachetti was making a charge into the top five after restarting in eighth.  He was able to knock off competitors one by one to greatly improve his situation.

Schroder was able to hold on for the victory by .577 seconds over Haas.  Bachetti was able to get past Marc Johnson on the final lap to finish third.  He has a 20-point over Haas entering the final full night of Modified points.  Eddie Marshall was fifth.

In Pro Stock, Dave Stickles led early in his No. 55 with Zach Seyerlein giving chase.  Points leader Chad Jeseo started seventh and moved him up into contention early on.

Following a caution due to Jason Meltz stalling in turn 3, Jeseo was able to take second from Seyerlein.  Shortly afterwards, Seyerlein would spin out exiting turn 2 and bring out a yellow.

On the restart, Nick Hilt Jr., who was running a setup that Jeseo’s team provided, snatched second place away from Jeseo.  He then went off to get the lead from Stickles.  Stickles ended up having a mechanical failure, which allowed Hilt to take the lead on lap 11.

The battle was on between Hilt and Jeseo, briefly interrupted by another spin for Seyerlein on lap 16.  With three laps to go, Hilt went a little too hard into turn 4.  That was all it took for Jeseo to take the lead and hold on for his ninth win of the year.

This advantage was neutralized by a caution due to Frank Twing Jr.’s spin with two laps to go.  Cordova was able to hold on for the win while a scramble behind resulted in Kevin Ames finishing second.  Cody O’Brien finished third, then Barnes and Dylan Grogan.

In Street Stock, Jeff Meltz Sr. was able to get the lead on the initial start from Franklin Smith right before Smith was wrapped up in a multi-car incident along with Katarina Foster and Brian Walsh.

Meltz spent much of the 15-lap race doing battle with Dom Denue.  Denue tried his hardest, but he could not prevent the 2021 Pure Stock champion from earning his first win of the year.  Denue was second, then Chris Stalker, Rob Partridge and Jim Dellea.  Earlier in the evening, Dellea won the Chatham Clothing Co. Street Stock Dash.