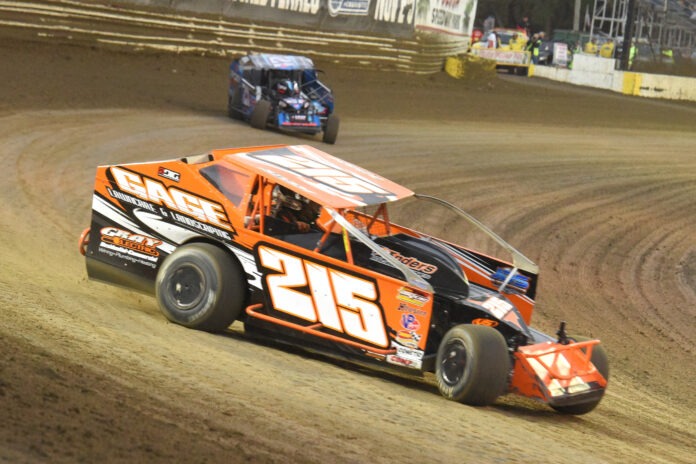 WEST LEBANON, NY –After a runner-up finish to Matt Sheppard during SummerFAST, Adam Pierson is seeing his early-season lessons pay off for a strong end to his rookie year.

Pierson comes from a long line of race car drivers. His father was a driver along with his grandfather and uncles. At the age of 16, his father put him behind the wheel of a race car, because as Pierson said, it was just “in his blood.”

That led to the East Corinth, VT native competing in several different divisions including Sportsman Modifieds, 358 Modifieds, USAC Midgets, D2 Midgets and Sprint cars before entering his rookie year with the Super DIRTcar Series this season.

When the opportunity to compete in a Big Block Modified presented itself, Pierson did not back down from the new challenge. When good friend and former Sportsman driver Adam Gage decided out of pure ambition to own a Small Block and a Big Block, Pierson had the car he needed to make the jump.  He signed on as a full-time Super DIRTcar Series driver for the 2022 season with Gage Motorsports.

Throughout the course of the season, he compiled a notebook of information on how he could improve his driving and the car, and what adjustments needed to be made. His diligence paid off during the inaugural SummerFAST when he claimed two 10th-place finishes, followed by a career-best second-place finish behind Series champion Matt Sheppard at Land of Legends Raceway.

“It felt really good to run second to him, and to just run up front with those guys, to stay up there and be competitive like that.” Pierson said. “That definitely was a confidence booster for us and the whole team. It feels pretty good. The track was in our favor a little bit too, so it was hard to pass. We still had to stay up there; we still had a good car. You can’t take that away from us, I guess. We’re running alright. We got a bunch of top-10s, we’ve made a bunch of redraws, we’re quick in the heat races. We’ve just got to put it all together and hopefully we’ll pick up a win maybe this year.”

Pierson stores his car and equipment in his personal garage, the same place he can be found educating himself on the mechanics of a Big Block with his father and son.

“The Big Block stuff has been new to me, new to my dad,” Pierson said. “With the coil stuff and all the suspension stuff now, I don’t know a lot, but we learn a lot every time. Once everything gets all put together, I think we can pick up a win. It just takes time. And you have to have luck. That’s a part of racing, too.”

With eight races remaining on the 2022 Super DIRTcar Series schedule, including the Mr. DIRT Track USA at Lebanon Valley Speedway this weekend (Saturday, Sept. 3), the 50th Running of NAPA Super DIRT Week (Oct. 3-9) and the championship determining World of Outlaws World Finals (Nov. 2-5) Pierson has a few certain goals he’s hoping to accomplish before closing out his rookie season.

“I think our goal is that if we can get in the top three again, maybe a top five in the last few races, I would be extremely happy,” Pierson said. “I think [car owner] Adam Gage would be happy.”

If you can’t make it to the tracks, you can watch every Super DIRTcar Series race, including the entire week of NAPA Super DIRT Week, live on DIRTVision – either online or by downloading the DIRTVision App.