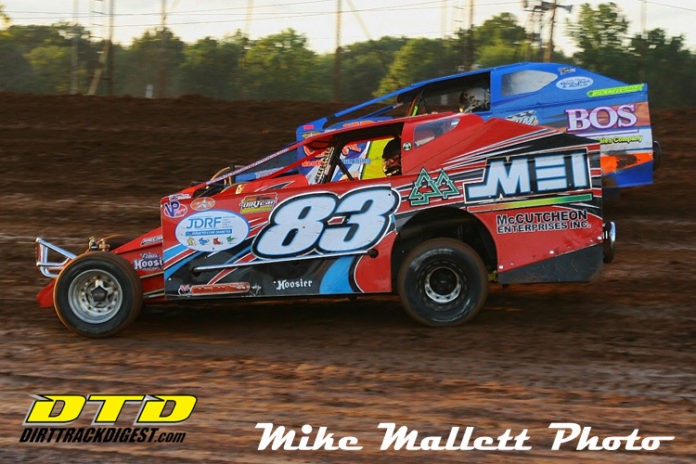 SARVER, PA – With the season opener of the Lernerville Speedway schedule fast approaching, there are changes afoot in the press box. It was announced Sunday evening that longtime Public Relations Director Eric Westendorf has stepped down from the position to focus his attention on the role of Track Announcer for the 2017 season. Having served both roles for the majority of the 2016 season after the untimely passing of beloved announcer Dow Carnahan, Westendorf will scale back his involvement at the race track to announcing duties and social media.

“It’s a decision I didn’t come to lightly,” Westendorf lamented. “Even before Dow passed away last spring, I had talked to Gary (Risch Jr.) about cutting back. We had our fourth son last season and my oldest is already 11. I need to spend more time being dad and less time being Big E! When I started 10 years, I never imagined it would blossom the way it did. I thought it would be a Friday Night gig, but it’s become this whole other world my family doesn’t really exist in. Announcing brings me back closer to what I had envisioned when I started; mostly Friday nights without hours upon hours of watching my kids over the screen of a laptop.”

Taking over Public Relations duties will be Gary Heeman of The Dirt Network. When asked about the choice of Heeman to replace him, Westendorf offered, “Gary came on board two seasons ago when I needed to scale back due to accepting a new job. He was already writing a weekly column called ‘The Story from Lernerville’ on their blogsite and I was looking for someone to write the weekly race report. It was the right fit at the right time. Gary and the crew at The Dirt Network provide a great mix of race reports, fan contests and social media interaction that I’ve worked so hard to achieve. He has really blended well into the press box and his writing brings a fresh new perspective on the action that has made Lernerville so popular. Carol Gamble put a lot of faith in me when I replaced her, so I’ll do the same with Gary. I have no doubts he’ll do an excellent job.”

Of his appointed, new PR Director Gary Heeman expressed, “We’ve have been very fortunate with the quality of the individuals that have assumed the duties of Public Relations Director here at Lernerville over the years and I am truly humbled and honored to be a part of that legacy,” Heeman said. “We’re blessed with a first class facility, tremendous ownership, an outstanding and passionate staff, and amazing drivers that put on a fantastic show week in and week out. It will be my pleasure to help spread the word about what we all experience every Friday night to the fans, sponsors, and racing community while keeping the standards set before me at a high level.”


Gary, along with head scorer Tyler Beichner and a crew that includes brothers Jerin and Trever Steele, Pat Miller, Josh Bayko and others at The Dirt Network have continued to expand their brand to cover racing throughout the United States. Gary’s specialty is Big Block Modifieds, but he has a wealth of knowledge of all divisions of dirt racing. In addition to his passion for racing, Gary also has a passion for hockey. As a reporter for US College Hockey Online and Pittsburgh Hockey Digest, Heeman covers Robert Morris University Men’s Hockey.

Effective immediately, Gary will assume PR duties to include press releases, website updates, quick results and race reports. Eric and Gary, along with Tyler Beichner, will share social media responsibilities as Lernerville will continue to push the envelope of social media engagement with the Finest Race Fans in the World!

Opening Night is less than three weeks away and three divisions of Fab4 Racing Fueled by Turner’s Premium Iced Teas will be in action. The Peoples Natural Gas DIRTcar Sprints, Diehl Automotive DIRTcar Northeast Big Block Modifieds and Millerstown Pic-A-Part DIRTcar/RUSH Pro Stocks will roll onto the Action Track on Friday, April 21 along with the RUSH Sportsman Modifieds to kick off the 2017 season. The Precise Racing Products DIRTcar Late Models will have the night in respect of Sharon Speedway’s Lucas Oil Late Model race. The Precise Late Models will rejoin their Fab4 cohort on Friday, April 28. Points, however, will start right away on April 21 for the Peoples Sprints, Diehl Mods and Pic-A-Part Pro Stocks.

But before Opening Night, we’ll light up the 4/10-mile Sarver Speedplant on Tuesday Night, April 18 from 6:00-9:00PM for the first of two Test & Tune Practice Sessions; the second is scheduled for Tuesday, April 25. Business really picks up in May with Tony Stewart’s All Star Circuit of Champions Sprints on the card for Friday, May 5, followed by a pair of Kenny Wallace Driving Experience Days at the track on Saturday-Sunday, May 6-7.

But all sites are set and calendars are circled for May 20 for the most anticipated event of the season as the Monsters are coming back to the Action Track! Yes, Monster Trucks are scheduled to invade Sarvertown on Saturday, May 20! For more information about the Monster Truck invasion and to view the entire 2017 schedule or to buy tickets for any event online, log on to www.Lernerville.com.