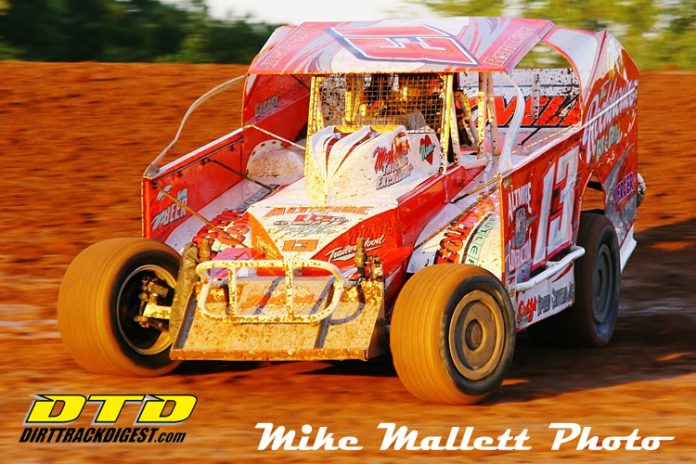 SARVER, PA – Fireworks will be in the air on Friday night at Lernerville Speedway as our annual Fireworks and Fan Appreciation night, presented by #1 Cochran Automotive takes center stage. It will also be Peoples Natural Gas and Sheet Metal Workers Night as well this Friday as the Fab Four Fueled by Turner’s Premium Iced Tea returns to The Action Track after a week off as we head towards our Midseason Championship Night on June 16.
Peoples Natural Gas DIRTcar Sprints

AJ Flick has yet to taste victory lane at Lernerville in 2017, but his time could be coming sooner rather than later. Flick currently leads the point standings heading into the weekend, five markers ahead of Dan Shetler who suffered his first finish outside of the top five the last time out.

Speaking of last time out, Gary Kreiss looked to be headed for Terry Bowser Excavating Victory Lane until he ran out of fuel with only a few laps to go as Dan Shetler inherited the lead and didn’t look back en route to his first victory of the season. Last year’s champion Jack Sodeman Jr. could be primed for his first Lernerville win of 2017 as well, following a performance at last Friday’s Arctic Cat All Star Sprint show that was impressive. After a rough start, Sodeman found himself in the C main and raced his way into the feature and was among the fastest cars of the night.
Precise Racing Products DIRTcar Late Models

It’s Dream 100 Weekend, so perhaps one or two of our weekly warriors may be in action at Eldora Speedway. And although we wish them success, a stout field of Late Models should be on hand. Michael Norris currently leads the point standings and has won two out of the three features thus far while former champion Alex Ferree stands 22 points back heading into the weekend.

Expect a few drivers who may be looking for seat time in preparation for the 11th Annual Firecracker 100 June 22-24 to be joining the action.

Mat Williamson holds a three to one lead over Brian Swartzlander in the feature win department, but holds only an eight point lead in the season standings heading into Friday night. Behind him, Jeremiah Shingledecker and Garrett Krummert have been among the fastest cars for most of the season and are both primed to take their first victories of the season.

The last time out for the Modifieds, Swartzlander managed to hold off Williamson who started at the rear of the field, in a thrilling finish that saw clean, hard racing from start to finish.
Millerstown Pic-A-Part DIRTcar/RUSH Pro Stocks

Corey McPherson appears to be on the right track towards another title in the early portion of the season, having found victory lane twice in four tries. However, Tyler Dietz appears ready to make McPherson’s job very difficult in 2017. Dietz has a victory under his belt in 2017 and lies just eight points back of McPherson in the season standings. Dietz has been consistent so far and has not finished worse than fourth this season. Behind them, Joey Zambotti appears to be turning flashes of brilliance into consistent performances this year, having wound up on the podium in three out of four main events so far.

Pits will be open at 5 PM on Friday night, grand stands at 5 PM with racing set to begin at 7:30 PM.

Grand stand admission is $14 for adults, $11 for seniors, $7 for students and children 10 and under are free of charge.

Come join us for an action packed night of racing and a thrilling firework display!