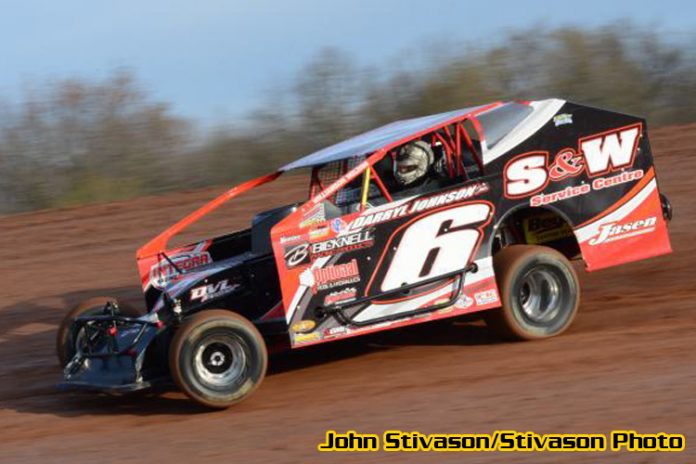 Sarver, PA – So far in the 2017 Lernerville season, this much is clear as the halfway point of the season approaches. Michael Norris, Mat Williamson and Corey McPherson continue to find ways to win, and they don’t show signs of slowing down anytime soon.  All three put on a show equal to the annual Fireworks display in terms of entertainment value as another Fab Four Friday Fueled by Turner’s Premium Iced Tea graced the clay on Friday night.

Norris came from the ninth starting spot to run down a hard charging Alex Ferree and Mike Pegher Jr. in Precise Racing Late Model action, while Mat Williamson eventually found a way around Rex King Jr following a furious battle for the lead in the Diehl Automotive Big Block Modifieds. Meanwhile, Corey McPherson also came from the 10th starting spot to wrest an almost certain victory away from Brett McDonald in the Millerstown Pic-A-Part DIRTcar/RUSH Sportsman.  And, in the Peoples Natural Gas Sprints, AJ Flick found a way to keep a stout field behind him en route to his first victory at The Action Track in 2017.

Todd Bachman and Gary Lyle brought the Late Model field to the green flag, but Alex Ferree made his intentions clear from the drop of it.  The former track champion bolted out to the early lead, making for the top of the speedway almost instantly where he gained immediate separation from the field.  Behind him, John Flinner and Mike Pegher Jr. were following similar paths to the front, especially Pegher who moved forward from his 13th starting spot and into the top three with less than five laps down.

Following a trio of cautions in the early going, Ferree found himself fending off stiff challenges from Pegher and Flinner for the majority of the race. Flinner found himself spinning in turn two at the seven lap mark, collecting Bachman in the process which ended the night for both competitors, though Flinner would make a short lived attempt to continue.

Once action resumed, Ferree and Pegher were looking to make it a two car battle for the win, but behind them lurked Norris who had been making steady progress towards the front. By the midpoint of the main event, Ferree had moved down into Pegher’s line while Norris passed Dan Angellicchio for the third spot.  And as lapped traffic emerged for Ferree, Pegher and Norris were able to inch close enough to make it a wide open, three car battle for the lead.

While Ferree and Pegher ran door to door, Norris was able to close in on the leaders until he was in a position to overtake Pegher with less than 10 laps to go. Then just a couple of laps later, Norris made his way around Ferree for the lead. The three cars ran close together as the laps wound down, with none conceding the outcome of the race.

But Norris was able to get away from the field in the final three laps, building a relatively comfortable margin with two laps to go, and he never looked back as he drove to his third win of the season.

“If you’re not trying to get faster you’re going to get beat,” Norris said. “I was kind of waiting for a tire to come in, we kind of gambled on tires and cautions weren’t helping us. We were just trying to stay out of trouble. I knew the only way I was going to get around them (Ferree and Pegher),  was if they got tangled up in some lapped cars and fortunately they did and everything just kind of went our way for us. I kind of let the track come to me. We were a little tight in the heat races but I reeled them in and just kept on hammering.”

After a pair of early cautions that saw pole sitter Clay Riney spin in front of he field as well Cory Good and Darren Pifer both spin in turn two, Sye Lynch looked to be the driver to beat as the 25 lap Sprint feature started to gain green flag lap momentum. Lynch, AJ Flick and Dan Shetler all made for the top of the surface in the early going, running nose to tail in front of the field of 21 cars.

Lynch would make one small slip that wound up costing him on lap eight when he went over the cushion in turn four to bring out the yellow flag, allowing Flick, who had moved forward quickly from his fifth starting spot, to inherit the lead. However, it would not be an easy one to maintain.

On the ensuing restart, Shetler got a good jump and looked to be making a bid for the lead, especially in turn two when he came close to overtaking Flick for the top spot. Flick would eventually create some breathing room as the previous week’s winner, Dan Kuriger began to make steady forward progress, entering the top three from his eighth starting position.

As the race came to the halfway mark, Carl Bowser entered the mix for the win as he moved around Kuriger and set his sights on the second running Shetler. Meanwhile, Flick was entering heavy lapped traffic which he dispatched with relative ease as Bowser and Shetler began a tight battle for second. Once Flick became further entrenched in a battle with lapped traffic Shetler began to reel in the leader, taking looks for the lead at the lap 16 mark.   But just two laps later, the complexion of the race changed in bizarre fashion as both Shetler and Bowser would slip off the turns, costing them their chances of reeling Flick back in with the laps winding down.  The race was Flick’s to lose on this night, even though two late cautions wound up making things interesting, the young pilot was able to keep the field behind him en route to his first win of the season at Lernerville, and his seventh career Sprint Car victory at The Action Track.

“I would liked to have stayed green, especially when we were in lapped traffic,” Flick said. “I saw Shetler come underneath me once and I knew that they were in his line so I knew if we could stay green that the lapped traffic would actually benefit me.  I didn’t really know anything about Kuriger and Bowser until we got the caution and I looked at the scoreboard. Carl is so good around this place when it gets real slick up towards the cushion, and I knew I couldn’t make a mistake or else one of those guys was going to be on me. I don’t come out here with any expectations on me. I just do the best I can to make myself proud and my family proud.”

Over the years, Mat Williamson has shown that he can win features in almost any kind of way that can be thought of, and his performance tonight became one more example of the sort of dominance he has had over the field during his time at Lernerville.

J.R. McGinley and Shawn Kozar started on the front row, and when the green flag waved, it took less than a lap to throw an element of doubt into Williamson’s ability to win on this particular night. Kozar spun in turns three and four as Williamson made contact with him. At the time, it was unclear how much damage Williamson’s car had taken on.

Once action resumed, McGinley assumed the lead and looked impressive in doing so while behind him, Rex King Jr. went to the high side and started passing cars like a man on a mission. As he made his assault on McGinley for the lead, Williamson began to answer questions about the health of his car as he made two passes, making his way around Rick Regalski and Dave Murdick on lap six.  King caught McGinley on lap seven and made his way past the leader on lap eight while Williamson would get around McGinley for the second spot just one lap later.

With nothing but lapped traffic in King’s way, Williamson looked primed to make the move for the lead, but he could not make it around King, even as the two competitors swapped running lines.  Williamson would continue to follow King around the lapped traffic, but as the race wore on, did not appear to be making much progress in his pursuit of the leader.

With 20 laps in the books, King and Williamson seemed to be in quite the battle for the win when Williamson pulled a power move down the back stretch, rocketing past King with authority. Williamson had to deal with three lapped cars himself en route to the win, his 23rd career victory at Lernerville.

“We had a good race car and this track is phenomenal,” Williamson said. “We got in a jingle there on lap one but I just stayed patient.”

The Pro Stock feature took a few tries to get going, but when it did finally see consistent green flag laps, a dramatic finish unfolded that was both an exclamation point and a moment of heartbreak simultaneously.

Following a series of early cautions, one of which ended the night of Tyler Dietz who took up the second spot in the season point standings, Brett McDonald took early command of the 20 lap feature on the high side and was impressive in doing so.

Behind him, Jim Fosnaught and Joey Zambotti had pulled away from the pack, gaining separation over Terry Young and McPherson.  With six laps down, McDonald began to stretch out a near straightaway advantage over Fosnaught while McPherson made his way to fourth and began hunting Zambotti.  McPherson would make the pass for second on lap nine while working the bottom of the surface.

But up front, it looked as if McDonald was more than on his way to his first career Lernerville victory, until the yellow flag waved for contact between Fosnaught and Terry Young with 10 laps in the books.  On the ensuing restart, McDonald elected to start up top.  McPherson got a good jump, and won the drag race to the first set of turns. McDonald was able to keep the new leader in his sights, but could not find a way to make up ground as McPherson proved to be too strong to overcome.  Behind them Paul Schreckengost was making his way to the front of the field in relentless fashion, taking third away from Zambotti as the laps wound down.

McDonald would get one more chance to reclaim the lead when Mike Bordt brought out the yellow flag wit 19 laps in the books, but McPherson got another good jump on the restart and never looked back en route to his third victory in five tries in 2017.

“I’m usually up top, that’s usually my preference here,” McPherson said. “But tonight there was some grip on the bottom and we changed the setup a little bit after we got tore up at Pittsburgh Speedway.  We had a long week and I’m just happy to get it back here and double up.”