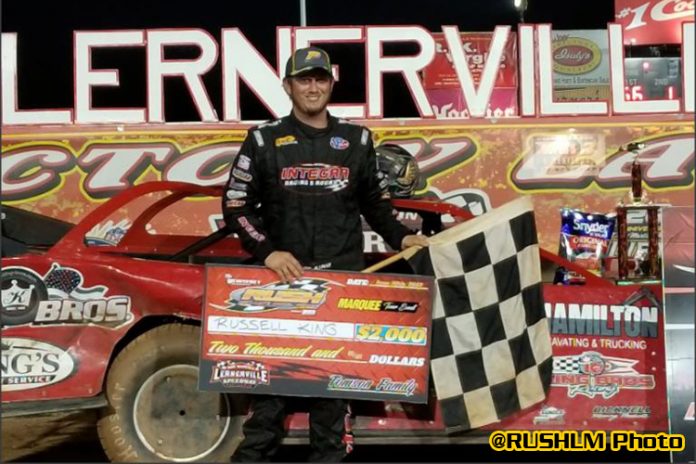 SARVER, PA – The Sweeney Chevrolet Buick GMC RUSH Racing Series powered by Pace Performance made its first visit of the season to Lernerville Speedway on Friday night for both the RUSH Late Model Touring Series and the RUSH Sportsman Modified Bicknell Racing Products Touring Series. Capturing wins were Russell King in the Late Models and Anthony Gillespie in the Sportsman Modifieds. In addition, the RUSH Pro Stocks were also in action for a Sweeney Weekly Series event, which was won by Tyler Dietz making for a total of 75 crate engine RUSH cars in the pit area. The event was completed without delay despite areas all around getting heavy rains.

Making his first start since May 22 in Canada at Merrittville Speedway, Russell King out-dueled an early battle with Series point leader Bryce Davis then held off a late charge by Mike Pegher, Jr. to win the 30-lap Sweeney RUSH Late Model Tour feature. King, who is a regular at Lernerville in the Super Late Model class, earned $2,000 for the victory as he became the fifth different winner in six events this season. King was also the recipient of the Maxima Racing Oil “Maximum Performance” award after a clean sweep of the night- fast time, heat win, dash win, and feature win.

“I got surprised there- I thought we’d be on the bottom and before I knew it Bryce snuck around me,” explained the 28-year-old Bristolville, Ohio victor. “I was just trying to be patient. We bumped on a couple restarts and then I just slid him and he slid me back. It was fun. I hope he’s not mad at me. I tried staying off of him and we just touched a little bit. That’s the way it is. I didn’t know it was going to move around (the track) like it did so once it did I had to get out there a little. In a way these cars are harder to drive than Super Late Models because you don’t have the power to bail you out so if you get a little bit crooked you bog them down. He (Davis) was getting tighter and tighter and he stopped a couple times on the lip, but the yellow came out right where it looked like I was going to be able to slide him on the other end. It was good race track, and a good night. I want to thank the fans and RUSH for putting this on.”

King bolted to the early lead over Pegher, Davis, and John Waters. The race was slowed when Bruce Hordusky, Jr. got crossed up on the frontstretch and a seven-car pileup ensued on lap three. Everyone would restart, but Series regular, Hordusky. When racing resumed, the top three of King, Pegher, and Davis pulled away on lap five as Davis was all over Pegher in the battle for second. Davis would make the pass in turn four on the outside and then closed on King before a caution for Jason Knowles with six laps completed.


When green replaced yellow, Davis made the outside work to the lead racing off turn four on lap seven. The top two began to quickly distance themselves from the field. King didn’t go away as he pulled even with Davis on lap nine, but Davis continued to lead. The battle was on for third as Pegher and Waters raced side-by-side on lap 12; meanwhile, Davis and King resumed their side-by-side battle for the lead on lap 13 with traffic looming ahead on lap 14. Waters and Pegher swapped third back and forth on lap 16 and 17.

King would make what would turn out to be the winning move on lap 20 as he performed a slider in turn two to take the lead from Davis, and by lap 22 pulled away. Pegher put a near identical slide job on Davis as King did in turn two to take second on lap 23. Davis, whose car became too tight, lost third and fourth to Waters and Jeremy Wonderling on laps 26 and 27 respectively.

Pegher began to close in during the last two laps. King caught traffic coming down for the white flag allowing Pegher to close in even move. Pegher made a big move in turn four coming down for the checkered flag, but King was able to hold on by just 0.515 of a second in the KMB Inc.-owned, Russ King Racing/King Bros./King Sanitary/Hamilton Excavating & Trucking-sponsored #56 for his third career Tour win.

Pegher was second for the second time in less than a week and earned another $1,000. “I gambled and put a hard tire on,” revealed the 31-year-old Cranberry Twp., Pa. driver. “The first couple cautions didn’t help me, but as the race went on, we got rolling. Russ (King) though was a little better than us tonight, but we’ll get them next time. Jerry (Haseleu), Brian (Swank), Alvin, and my crew guy Brunner have a blast taking this car around- it’s fast and that makes it even better. We’ll take second again.”

Waters matched his third place Tri-City Raceway Park finish with another third for the defending Tour champion. Jeremy Wonderling had a solid run in fourth after starting ninth in his first career Lernerville start for the second place point man. Davis held on to fifth.

Daryl Charlier came from 13th to sixth. Andrew Wylie was seventh in his first RUSH start of 2017. Kyle Lukon received the $100 Precise Racing Products “Pedal Down” Hard Charger gift card for advancing 12 positions to an eighth place finish. Brian Knowles was ninth over 21st starting Eric Wilson in his first Sweeney Tour start of 2017. Jamie Wrightsman was the final car on the lead lap in 15th and received a $25 CrateInsider.com gift certificate. Tour regular, J.J. Mazur, had a good run going until losing an engine, and received the TBM Brakes “Tough Brake of the Night”.

Chuck Recker dominated all six laps of the non-qualifier race for the $175 victory. The Pittsburgh, Pa. driver became the 24th different winner in 26 races run all-time! Bill Kessler was 1.786 seconds back in second. Pete Wearing and Tony Iarrapino completed the starting field. Chris Frank, who was scheduled to start on the pole, didn’t start the race, but received the ARbodies “Nosed Out” nose kit contingency.

King set fast time over the season high 32-car field in FK Rod Ends “Shock the Clock Qualifying” with a lap of 16.942 to earn $100 then added $25 for winning the first FK Rod Ends heat race and a $100 K&N certificate for winning his first “Cold Air Induction” Dash of the season. Josh Stoica, Davis, and Waters also earned $25 for their FK Rod End heat race wins. Pegher picked up a $50 K&N certificate for his runner-up dash finish, while Davis and Waters grabbed another $25 cash for their third and fourth place dash finishes respectively.

“I checked up when he got by me and said I’ll get him next time,” explained the 32-year-old Warren, Ohio winner. “I just went for it and I got it. I didn’t know if I could hold him off, but I knew if I could get to the corner I’d get it. This means everything to me. I’ve been racing since I was 15 in a Mod Lite and this is my first full year in the RUSH Series and I love it. I can’t thank Smitty enough for letting me drive his car. I have to thank all of my sponsors and the fans.”

Billy Myers looked good early on leading his first laps of the season, but the race took a dramatic turn on lap four when Jeremy Weaver spun after making contact on the frontstretch. Under caution, the runner-up of Shayne Izzo’s car went up in flames after losing an engine. He was able to exit safely. Then when racing resumed on lap five, Myers seemed to lose power as he faded through the field as Gillespie and Ritchey took over the top two spots on lap five.

Gillespie and Ritchey raced side-by-side for the lead on laps seven through nine until Chelsie Kriegisch stopped to bring out the caution with nine laps completed. By lap 11, Gillespie and Ritchey pulled away from the field. On lap 12, Ritchey drove hard into turn four and slid past Gillespie for the lead. The event’s final caution was displayed when Weaver spun with 15 laps completed.

The caution was just what Gillespie needed as he made the outside work on the restart for the winning pass. It was a fight to the finish and drag race off turn four coming down to the checkered as Gillespie edged out Ritchey by just 0.192 of a second! Gillespie’s win came in the John B. Smith-owned, Williams Trucking/Deforest Used Auto Parts-sponsored #3G. Gillespie became the eighth different Bicknell Tour winner in 13 races run all-time. The victory also closed him to within four points of Kyle Martell, who won the first two Bicknell Tour races.

After troubles early on, Kole Holden bounced back to finish third after starting 15th and received the Sherwood Wheels “Man of Steel” award. Chas Wolbert was fourth. Josh Deems raced from 18th to fifth and earned the $100 Precise Racing Products “Pedal Down” Hard Charger gift card. Completing the top 10 were Brian Schaffer, Martell, Nick Ritchey, Jacob Jordan, and Preston Cope. Ethan Siple was the final car on the lead lap in 15th and received a $25 CrateInsider.com gift certificate.

On Sunday (July 2) at Old Bradford Speedway in Bradford, Pa. will be a $3,000 to-win Sweeney “Marquee” Tour event for the Late Models. The RUSH Sportsman Modifieds were scheduled for a Bicknell Tour event at Sharon Speedway for “Manufacturers Night” presented by MSD Performance on Saturday night. Both Touring Series will be at Expo Speedway for the Trumbull County Fair in Cortland, Ohio on Wednesday, July 12.