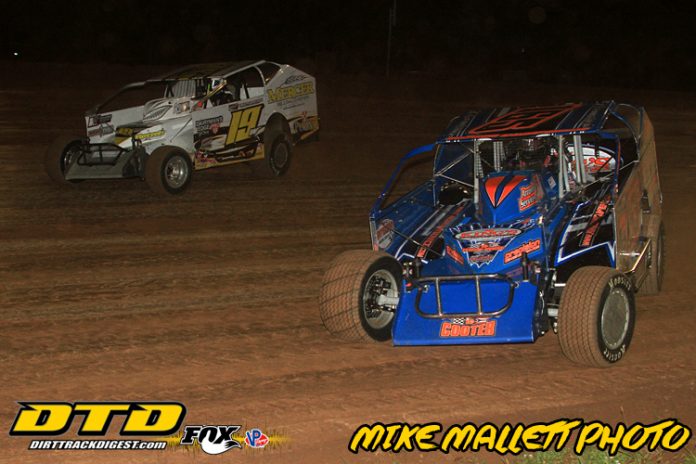 The 2017 edition of the DIRTcar Roundup Steel City Stampede kicked off on Friday night at the Lernerville Speedway with a bulging pit area. With nine divisions in action, a total of 229 filled the pits plus the over flow pit area that was created in the speedway parking lot to help with the mass of cars.

305 RaceSaver Heats were won by Brad Mellott and Vinny Dougherty.

Eric Boozel and April Tennant wrapped up the night by winning the Four-Cylinder heats.

Russ King competed in both the RUSH Late Models as well as the Super Late Models. He captured heat race wins in both events.

Matt Lux won his Super Late Model heat race from the eighth starting position. He was dominating the UMP Modified heat race when radiator came loose and got into the fan forcing him into the pits.

Steve Feder started on the outside of the front row of his big-block Modified heat only to have problems at the start.

Brian Knowles passed Jeremy Wonderling on the final lap coming off of turn four to win his RUSH Late Model heat race. He made the move on the bottom while Wonderling tried to make it work on the outside.

Feature events take place Saturday night for all nine divisions. The 410 Sprint Cars, Super Late Models and big-block Modifieds were each run for an opportunity to win $3,000. Racing will get underway at 7pm.