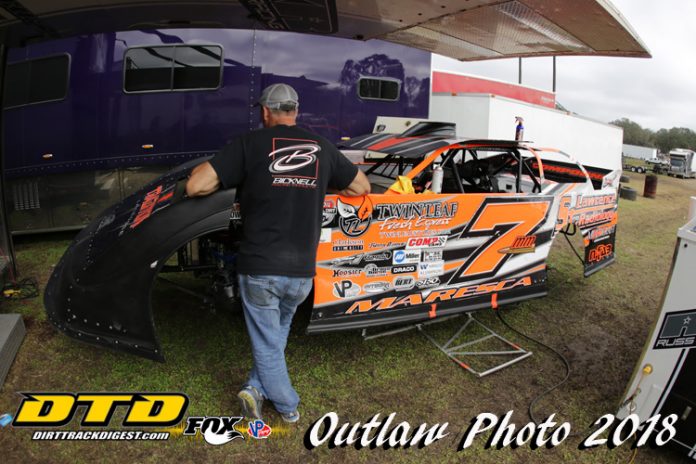 SARVER, PA – The temperatures were on the brisk side and some pestering rain showers managed to miss allowing the first of two scheduled Test and Tune sessions to grace The Action Track on Wednesday night. The annual pre-season shakedown saw nearly 50 drivers fine tuning their cars in advance of the Lernerville regular season which opens up on Friday, April 20.

The Peoples Gas DIRTCar Sprint Cars were represented by Gary Kreiss and Michael Bauer as well as former weekly competitor and now full time All Star Circuit of Champions touring driver John Garvin Jr, while the Precise Racing Products DIRTcar Late Models saw Matt Lux, Mike Pegher Jr. and Colton Flinner. The evening also saw the debut of the newly wrapped Alex Ferree car as he displayed a new look with a familiar #4 on the side.

The Millerstown Pic-A-Part DIRTcar/RUSH Pro Stocks were well represented with 13 cars on hand while 9 Rush Sportsman Modifieds and 8 Rush Late Models made their way to the pits for the night.

The fans on hand were treated to rotating hot lap sessions and a chance to see their first laps of the year at any area speedway due to an abnormally wet and cold spring thus far. On the track, the fastest recorded lap time of the night went to Kreiss who turned a 16.09 second lap during the middle rounds of the evening.
The second Test and Tune of the season will take place on Tuesday, April 17 as drivers will get one more chance to fine tune their cars before our regular season gets underway.