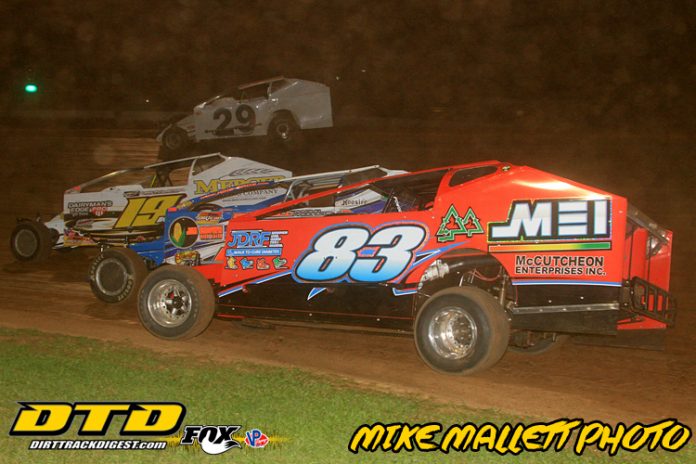 SARVER, PA – great night of racing for a great cause is at hand. It’s time for the Fab4 Fueled by Turners Premium Iced Tea to make their Action Track debut for 2018 and that’s just the half of it as our second annual Autism Awareness Night will be taking place on Friday night as well.

The Peoples Gas DIRTcar Sprints, Precise Racing Products DIRTcar Late Models, Diehl Automotive DIRTcar Big Block Modifieds and Millerstown Pic-A-Part DIRTcar/RUSH Pro Stocks will be ready for action as the points for all four divisions will be starting up. AJ Flick, Michael Norris, and Corey McPherson stand ready to defend their 2017 championships in their respective divisions while in the Modifieds a wide open battle for the title looks ready to unfold.

Fans will be treated to a Chinese auction with prize donations from Turners, the Pittsburgh Penguins and Steelers, Goettler distributing, Fuhrer Wholesale, O’Donnell’s Distributing and many more. There’ll be Skateboard decks, coolers, vintage Lernerville jackets, golf bags and an assortment of very nice bundled gifts and also an authentic checkered flag signed by various members of the World of Outlaws Craftsman Sprint Cars! For Chinese auction gift pictures and details be sure to check out the Lernerville Facebook page. We will also have an information area set up and the drivers will be making their way through the grandstands accepting donations for the Autism Society of Pittsburgh.

As for what to expect on the track goes, it should be a fantastic night of racing as drivers prepare and adjust for a new look to turn four and it’s newly decreased banking. The change should provide for a racier portion of the speedway while challenging setups and tactics.


AJ Flick was a model of consistency last season in taking his second career championship and will be looking to add more wins in 2018. The Apollo, PA driver put his car in the top five in all but one race night which actually happened to be opening night.

Behind him, Dan Shetler kept his forward momentum going once again in 2018, competing for the title right up until the final night of competition. Like Flick, Shetler garnered just one feature one last season and would be looking to improve upon that total. Both Shetler and Flick have been active in the early season in central, PA action thus far in 2018. Jack Sodeman Jr. also appears to be thick in the hunt for the 2018 title once again and recently kicked off his season with the All Star Circuit of Champions at Wayne County Speedway last Saturday night.

Gary Kreiss Jr. rounded out the podium in 2018 and came very close to finding victory lane on more than one occasion last season. The veteran pilot was present at our Test and Tune session on April 11 and looks to have picked up right where he left off in terms of his competitiveness.

Sye Lynch made great strides in 2017, winning his first 410 feature event at Sharon Speedway towards the end of the season while running towards the front of the pack on many nights at Lernerville. This coming season, look for him to take another leap forward and also to bring a familiar looking car on select nights in the coming season.

NORRIS AIMS FOR ANOTHER SEASON TO REMEMBER

The 2018 season for Michael Norris was as close to perfect as it gets from a weekly standpoint. Not only did Norris capture his first career track championship at Lernerville, he won five main events while placing every finish in a podium position and will be looking to continue that success this season.

Behind him, Alex Ferree, Gary Lyle, Clayton Kennedy and Kenny Scheltenbrand managed to round out the top five in the season points standings with Ferree being the only member of that group to score a victory. Ferree will likely do more traveling in 2018, but will be making stops here and there when his schedule allows.

Veteran pilot Matt Lux brought his beautifully wrapped car to the April 11 Test and Tune session and will be a tough out when he joins the field as he won the final feature of the year in the annual Steel City Stampede. Meanwhile, Mike Pegher Jr. had a frustrating 2017 campaign and will be looking to avoid mechanical gremlins that plagued his season, while 2016 champion Russ King should make appearances when his schedule allows as well.

Mat Williamson will be on hand on Friday night, but the four time champion looks to be giving up the title in 2018 as he has been tapped to travel more and follow the Short Track Super Series southern division this year. Williamson made it look easy once again last season winning all but two feature events during the regular season.

So with the top spot seemingly up for grabs, expect Jeremiah Shingledecker and Brian Swartzlander and potentially Rex King Jr. should his schedule allow, to be battling for the title in what looks to be a very even and competitive battle. Expect Garrett Krummert to build off some confidence from some promising Modified Tour performances during the past two seasons as he looks to be taking another step forward in his development while Dave Murdick, Steve Feder and Rick Regalski to be in the thick of the top five by the season’s end as well as John Mollick who looked very impressive in entering the field at the midway point of the season in 2018.

MCPHERSON LOOKS TO ADD TO IMPRESSIVE TOTALS IN 2018

Cory McPherson will be seeking his fourth consecutive track championship in a row starting Friday night and will be once again very difficult to overcome. McPherson wound up with six regular season feature wins last year and a very impressive performance in the annual Autumn-Motive Fest where he defeated a formidable pack of open stocks to take home the big check.

Behind him, the youth movement of Tyler Dietz, Aaron Easler and Joey Zambotti will be giving it their best shot this season as they took home top five finishes in the final point standings while earning one feature victory apiece. Meanwhile, Joe Kelley, Brett McDonald and a quickly improving Noah Brunell will be looking for a feature win that evaded them in 2017.

On Friday, pits will be open at 4 PM with grandstands opening at 5 PM and racing starting at 7:30 PM sharp. General admission is $15 for adults, $12 for seniors 60 and older, $10 for students aged $11-17 while children 10 and under are free of charge. Pit passes are available for $25 for DIRTcar members and $30 for non members. Come join us for a night of great racing for a great cause