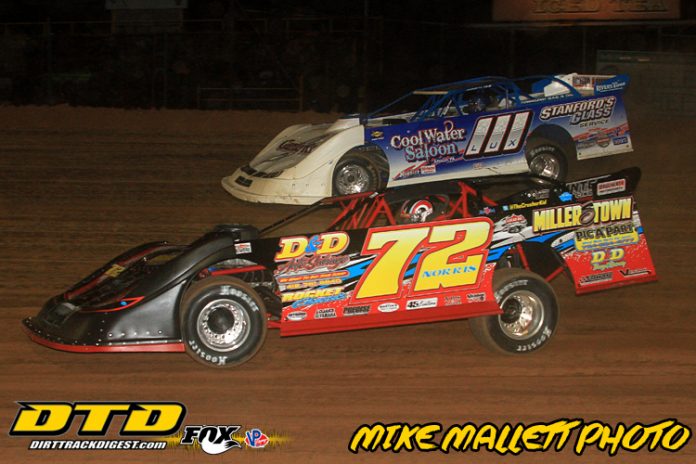 CONCORD, NC – The 12th annual Firecracker 100 at Lernerville Speedway is just around the corner. Both fans and drivers look forward to three days of racing and three times the party. The party starts on Thursday, June 21, continues on Friday, June, 22 and concludes on Saturday, June 23.

All three nights contain complete Sears Craftsman shootouts with $6,000-to-win on both Thursday and Friday. The finale event begins on Saturday as the stars of the World of Outlaws Craftsman Late Models Series alongside other national and regional drivers compete in the $30,000-to-win Firecracker 100-lap Sears Craftsman Feature event.

In addition to the hot action on the track, the Firecracker 100 includes several family-friendly events where fans of all ages can participate in activities alongside his or her favorite drivers.

All drivers have been invited to join the fan-favorite kickball game. Fans will also have the opportunity to challenge some of their favorite Late Model drivers in a cornhole and horseshoe tournament. There will also be a post-race concert on Thursday and Friday and an autograph session on the mid-way on Saturday.

Additionally, a raffle and auction with several great items will be up for grabs including doors, t-shirts, a pair of tickets to the Don Martin Memorial at Lernerville on July 17, tickets to the Steel City Stampede, a DIRTVision Fast Pass for the remainder of the 2018 season, and a 230-piece Craftsman tool kit, just to name a few.


In honor of the recent passing of Sandy Holt, who was a longtime World of Outlaws Craftsman Late Model Series Scorer from 2005-2013, all proceeds from the kickball game, raffle and auction at the Firecracker 100 will be donated to the LUNGevity Foundation.

“We decided that with all Sandy has been through over the past few months, and all she has done for the Series over the years, that we would donate all of the proceeds from the kickball tournament, raffle and silent auctions at the Firecracker 100 to a foundation in her memory,” said World of Outlaws Safety Director Tyler Bachman. “My wife Melissa and I presented the idea of donating to the LUNGevity Foundation. We thought that not only could World of Outlaws officials relate to this foundation, but also many people in the Dirt Late Model community.”

All proceeds raised from the 6th annual Kick-it-to-Cancer Kickball game, raffle and silent auction will be donated to the LUNGevity Foundation, one of the nation’s leading lung cancer non-profits dedicated to raising money and awareness for lung cancer.

The LUNGevity Foundation is firmly committed to making an immediate impact on increasing quality of life and survivorship of people with lung cancer by accelerating research into early detection and more effective treatments, as well as providing community, support, and education for all those affected by the disease.

Holt recently lost her battle with lung cancer on May 29. In honor of her steadfast dedication and passion to dirt late model racing, the World of Outlaws will take part in a special memorial prior to the kickball game at Lernerville Speedway.

“Sandy was a loved member of the World Racing Group family from 2005 until mid-2013 and she remained part of the ‘friends and family’ group,” said Tracy McDaniels, Director of Human Resources for World Racing Group. “She is a known fixture in Late Model racing, especially throughout the Southeast. We know that it takes a special person to keep Rick Eshelman in line, and Sandy has done that for years. Anyone who knows the couple has seen their dedication to each other.”

World of Outlaws Announcer Rick Eshelman and Holt have been together for more than 13 years. During this difficult time, we ask that you keep Eshelman and the Holt family in your thoughts and prayers.

If you would like to send a card of condolences to the family, please send it to the World of Outlaws headquarters at 7575 West Winds Blvd. NW, Concord, NC 28027, and we will pass it along to Eshelman. If you would like to donate to the LUNGevity Foundation, please participate in the fan festivities at the Firecracker 100 on June 21-22-23 at Lernerville Speedway or visit https://lungevity.org/for-supporters-advocates/support-our-work directly.