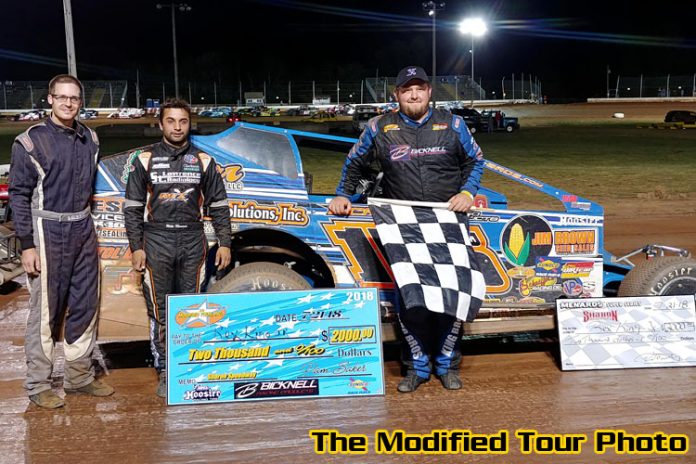 HARTFORD, OH – It was a busy weekend for the BRP Modified Tour (Modified Tour Inc.) with races at two tracks in two states. Friday night took the Tour to the famous Lernerville Speedway in Sarver, PA then traveled to Sharon Speedway in Hartford, Ohio on Saturday. Both nights saw the same car and driver in victory lane.

It was a great field of cars at Lernerville Speedway for Friday night racing. 32 drivers fought for 26 spots in the 35-lap, $2000 to win event. Colton Walters and Mat Williamson grabbed front row starting spots for the feature. It was not a good start to the feature for front row starter Walters as he would spin on lap one, bringing out the first caution. This would bring Jim Rasey up beside Williamson on the front row for the restart. Over the next ten laps, two more cautions would fly for driveshaft issues for Tom Glenn and a flat tire for Chris Haines. By lap 11, Rex King Jr. will move up beside Williamson on the front row, but an early jump on the restart would move the 165 back a row, putting Michael Maresca beside Williamson.

The 6M of Williamson would stay out front, getting into heavy lap traffic by lap 25. Maneuvering through traffic would allow the second-place car of Maresca to close in on the leader. The leaders are bunched up again after a quick caution allowing King Jr. to put pressure on second-running Maresca. He would make the pass on lap 29 and take over second.

With two laps to go, the caution flag and red flag would spell trouble for the leader. Williamson would not be able to get the car re-fired. He later said it was a fuel pump issue. This would turn the lead over to King Jr. with two laps to go. King Jr. would end his win drought which dated back to the first race of the 2017 season. Maresca would finish second, followed by Tyler Willard, Jim Rasey and Jeremiah Shingledecker.

There was a threat for rain Saturday night, but Mother Nature was good to the Tour, bringing just a few sprinkles early in the night at Sharon Speedway. Rick Regalski and Rex King Jr. would lead the field to the green. The green flag would be held up as a caliper issue with take out Tom Glenn during the pace laps. When the green flag flew, the front row starters would get shuffled back a few spots and when the next caution flew on lap four, the top three would be comprised of Jim Rasey, Dave Murdick and Michael Maresca. It would not take long for King Jr. to regain those early, lost spots. He would move into second on lap five and take over the lead the next lap. By lap 12, the leaders were getting into heavy lap traffic. The straightaway lead that King Jr. had opened up would be closed when Kevin Hoffman would hit the infield tire and bring out the caution on lap 15.


On the restart, Maresca would jump out front, but Jim Weller Jr. spinning before the lap was complete, would move the 7MM back to second. Maresca would have to move back a row for jumping the next start. King Jr. got a better jump on the following restart and moved out front. Maresca and Garrett Krummert would battle hard for second with Maresca grabbing the spot on lap 17.

Krummert would regain second from Maresca as a long green flag stretch would send the leaders into heavy lap traffic once again. A scare of the leader on lap 33 when Rick Regalski would wheel hop the 165 on the front stretch. It did not slow the leader down and Rex King Jr. would stretch out his points lead and pick up his second win of the weekend. Krummert, Maresca, Rex King Sr. and Jeremiah Shingledecker would round out the top five.
The next race for the BRP Modified tour will be August 25th at Sharon Speedway.