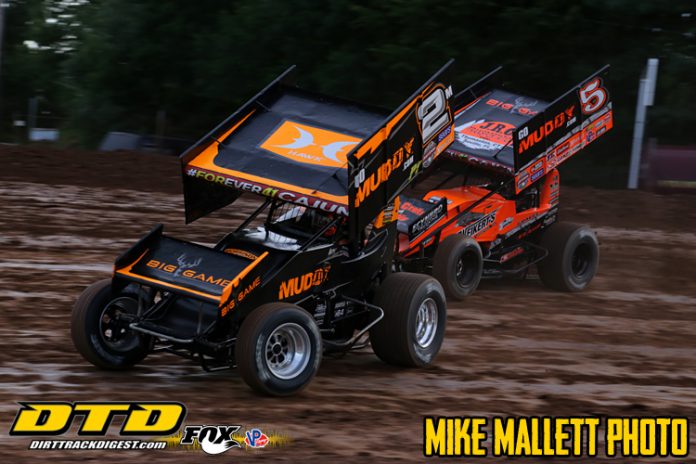 CONCORD, NC – After a month on the West Coast, the World of Outlaws Craftsman Sprint Car Series will return to the always-exciting Lernerville Speedway in Sarver, PA with the running of the Commonwealth Clash on Saturday, September 22. As the World of Outlaws’ 40th Anniversary Season reaches its home stretch, it’s only fitting that The Greatest Show on Dirt returns to Lernerville, a track that the Series has visited for 39 consecutive years, one more time.

The past two years the Outlaws’ visits to the high-banked 4/10th oval have been dominated by David Gravel and Donny Schatz. Schatz, who sits comfortably atop the Series Point Standings in search of his 10th Championship, has always fared well at Lernerville and owns eight career World of Outlaws victories at the Western Pennsylvania facility dating back to 2003. Schatz and Gravel have each split the two races the last two years at Lernerville, with Schatz grabbing the 2017 Don Martin Memorial Silver Cup and Gravel scoring the victory in the 2017 Commonwealth Clash. The year prior, the results were swapped.

As the defending race winner David Gravel enters with this year’s edition with confidence. “Lernerville is always a track that I look forward to getting to. It took me a while to get my first win there, but we’ve been really good there lately and always seem to be in the hunt,” the driver of the CJB Motorsports No.5 said. Gravel and CJB are coming off a career-high 18 wins last year and a third place in the Series Point Standings in 2017.

Gravel again sits third in points and has five wins on the season with the most recent coming at Ransomville back in late July. It’s no secret that Gravel will be looking to pounce on the momentum he’s built at Lernerville. “To be honest, it’s one of my favorite tracks we go to all year. I’m really looking forward to getting back there,” the Watertown, CT native added.

Despite the Outlaws’ rich history at Lernerville, outside of Gravel and Schatz, Daryn Pittman [2013] is the only other current full-time Series regular with an Outlaws win at the facility.


Lernerville Speedway recently crowned AJ Flick, who won six features at the track in 2018, as their 410 Sprint Car Champion, and he’ll be on hand to represent the Western Pennsylvania regulars. George Hobaugh and Sye Lynch will be in attendance as well, looking for strong results. Sye Lynch’s father, Ed Lynch Jr., defeated the Outlaws at the facility in the unforgettable 2002 Silver Cup.

Tickets for the Commonwealth Clash are still available here. If you can’t make it to the track, be sure to watch all the action LIVE on DIRTVision.com!